Your Good Girl's Gonna Go Bad is the twentienth episode of the second season of Nashville. It was written by Meredith Lavender & Marcie Ulin and directed by Mario Van Peebles. It first aired on April 30, 2014.

After Scarlett's meltdown on stage, Avery comes to the rescue while Juliette says to get the jet ready to fly Scarlett back home so the media won't find out or show up. The next day in Nashville, Rayna, Deacon and Bucky are all waiting for them at the airport. Even though Rayna is not blaming Juliette, Rayna says that it wasn't the best idea to send Scarlett on tour with Juliette. When the plane arrives they check on Scarlett and send her to a clinic to help get everything out of her system.  Beverly tried to call Rayna out on being a bad mother but Rayna bows out gracefully of their conversation.

When Scarlett awakens strapped down to a gurney, Beverly is the first person she sees and she proceeds to have another freak out.  She wanders outside and is followed by Deacon, Rayna and Beverly.  As Deacon attempts to hold Beverly back, Rayna calms Scarlett down and leads her back inside.  Scarlett admits that Liam gave her the caffeine pills and that she doesn't belong in a psych ward but Rayna points out that wandering outside into a field doesn't help her case.  Juliette later shows up and attempts to bond with Scarlett over their crazy mom's but Scarlett tells her it's her fault for letting her go onstage in the condition she was in.  However, Scarlett doesn't remember what exactly happened until she watches a YouTube video of her meltdown.  Zoey shows up to comfort her best friend.

Meanwhile, Gunnar buys a house and figuring that Scarlett doesn't want to see him, he plays a round of golf with Jeff.  Jeff invites him to join Edgehill as a songwriter but makes the mistake of calling Scarlett crazy, leading to Gunnar telling Jeff where he can stick his offer.  Gunnar goes home and after viewing Scarlett's YouTube video, he writes a song.  Elsewhere, Beverly and Deacon are arguing about their parents and the fact that Scarlett's father dumped both of them and now Scarlett is doing the same to her.  Deacon forgives his sister and says they have to stick together for Scarlett's sake.

At Will's rehearsal Layla shows up with a reality TV producer saying that they should do a reality TV show together.  Avery decides to pay Scarlett a visit and tells her that she can talk to him any time she wants and they both say that they'll always care about each other, as Juliette listens outside the door.  After being allowed to go home, Scarlett comes to the decision that she doesn't want this and Rayna says that she will release her from her contract. That night at the BMI party, Juliette is obviously upset about Avery and Scarlett's conversation and ends up having sex with Jeff.  As they're leaving the cloakroom, Gunnar catches them together. 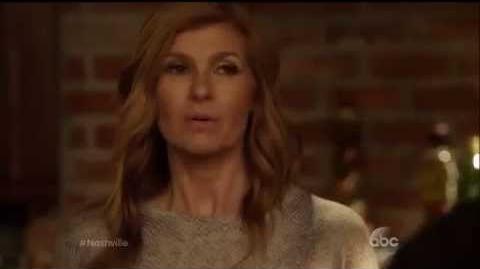