You Can't Lose Me

You Can't Lose Me is the nineteenth episode of the fifth season of Nashville. It was written by Savannah Dooley and directed by Jesse Zwick. It aired on July 20, 2017.

Following their ordeal at the supermarket, neither Gunnar nor Scarlett can sleep. The following morning as a bleary-eyed Gunnar heads to the police station, Scarlett gets back into bed but is unable to sleep due to stomach pains. When she looks down at her bed sheets, she spots a blood stain. She calls Deacon who finds her washing her bed sheet and takes her to the hospital.

When the doctor performs an ultrasound, she delivers the sad news that she is unable to find a heartbeat, meaning that the baby has died. The doctor reassures her it was not caused by the events of the previous night and sometime these things happen. Gunnar arrives at the hospital to be told by Deacon that Scarlett has lost the baby. He attempts to comfort Scarlett, only for her to tell him that she wants to be alone to give birth to the baby. Later when they get home, he rushes to change her bed sheets but she again asks to be alone. When he leaves, she breaks down sobbing as she clutches the blanket that her stillborn daughter was placed in.

Gunnar spends time with Will but is unable to tell him that Scarlett lost the baby. Instead, he imagines a scenario where he takes out the youths and protects Scarlett. Later, he falls into a fitful sleep but imagines the youth standing over him with the gun.

As Deacon watches Maddie at rehearsal, Jessie phones about a scheduling conflict, leading to Deacon breaking the news that Scarlett lost the baby. The following day, Jessie shows up at Scarlett's house with a gift basket for Scarlett, who invites her in for coffee. Jessie says she knows what Scarlett is going through since she had two miscarriages herself and they bond over their shared experience. Deacon is not happy to see Jessie there when he gets home but Jessie sets the record straight, as she points out that she is only trying to be his friend and he keeps overreacting. Meanwhile, Gunnar decides to take matters into his own hands by driving around until he tracks down the youth and proceeds to beat him up until the boy pleads to let him go, so Gunnar does so.

Elsewhere, 'Water Rising' has proven to be a huge success and Zach comes up with the idea of Juliette performing it as a duet with Maddie at the latter's show. When Juliette takes to the stage she feels the guilt so much that she cannot look at Maddie. The following day, Maddie shows up at Juliette's house to ask if everything is okay between them and Juliette reassures her it is. Maddie says she will be at Juliette's party on Friday night but unfortunately the song's writer also plans to attend.

Juliette is afraid that Travis and Maddie will bump into each other and decides to give him a ticket to another show. However, on the night of the party Travis turns up at the venue to celebrate with Juliette, who tells Maddie that she is coming down with flu and Maddie, convinced by all this, prepares to leave but ends up bumping into Travis, who says that he is sorry she passed on the song. As he leaves, Maddie quickly puts two and two together and storms back to the party, yelling at Juliette for stealing the song and throwing a drink in her face.

The spat ends up splashed all over the media and Juliette turns up at Rayna's house to offer her apology, only to be told by Daphne that Maddie does not want to see her. Daphne then tells Maddie that it appears that Juliette really meant what she said in her apology. Later when Deacon asks Maddie about the falling out, she just says it is something that she needs to figure out on her won.

Scarlett is unable to get through to Gunnar by phone and decides to pay him a visit. They question their feelings for each other and Scarlett decides that the best thing for both of them is to spend time apart. Avery later calls Gunnar to invite him to join him on the road so the next day as Gunnar calls to the house to pick up his belongings, he tells her that he is heading out of town to join Avery and Scarlett tells him that she is still going ahead with the charity fundraiser without him. They say their goodbyes.

That evening at the fundraiser, Deacon apologizes to Jessie for his behavior before introducing her to Maddie and Daphne as a "friend". The girls rush off to ask Scarlett about the baby and she comes clean to them, revealing that she had a miscarriage. Scarlett then takes to the stage, delivering a heartfelt speech about birth control, pregnancy and miscarriages before saying that she hoped her daughter would have a limitless future. She then sings to the audience as Gunnar drives out of town and Juliette looks at a magazine article. In Scarlett's room, a box containing baby clothes and marked on the lid with name "Amelia Rose" can be seen on her bed, the name being that of her unborn child. 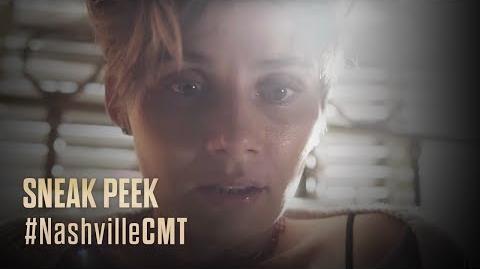