Why Don’t You Love Me

Why Don't You Love Me is the nineteenth episode of the first season of Nashville. It was written by Todd Ellis Kessler and directed by Stephen Cragg. It first aired on May 8, 2013.

Juliette and Rayna have each been nominated for a CMA Award for Female Vocalist of the Year. Both ladies are invited to a celebration party on a riverboat. Juliette hopes to solicit votes by sending bobbleheads of herself to every member of the Country Music Association. She wants to give them all champagne, too. Speaking of champagne, Juliette's been downing a significant number of mimosas. She still doesn't want the police involved despite Dante having scammed her out of a half million bucks. She has her reputation to protect. She lets her mom know that she was right about her former sober coach's devious nature.

Deacon accuses Rayna of stealing all the covers as she wakes up in his arms. The question for the two of them now is… What now? Tandy advises Rayna on the situation while Coleman gives a tough love speech to Deacon. As for the couple in question, they agree to take things slow while stealing kisses behind closed doors. Actually, Rayna's the one who wants to take it slow. Deacon is ready to jump into her world. That’s why he breaks up with Stacey. He even gives her his dog named Sue.

Gunnar is giving Will the cold shoulder after his new best bud tried to kiss him. He’s also hesitant to let Scarlett hear the song he's cutting for a demo. The producer he met isn't really interested in his ballads, so Gunnar tries to sell himself as the bad boy his brother was. His demo recording session is the same night as the Edgehill nominee party, so Will volunteers to be Scarlett’s date for the event. He helps her network while also asking Rayna to take a listen to his own demo.

Maddie doesn't want to attend the father-daughter dance with her dad, but Teddy eventually convinces her to go. The two of them need some healing time together. When Teddy learns about Rayna's new relationship with Deacon, he worries that the truth will come out about him not being Maddie’s biological father. He wants Rayna to honor the promise they made when Maddie was born. At the father-daughter dance, Teddy finally manages to break down a wall with Maddie. The two of them end up having a great time together.

Juliette continues to drink heavily before the nomination party. She learns that Dante used some of her money to buy a $17,000 engagement ring. Rayna can smell the alcohol on Juliette as they pose for pictures. Marshall also notices how tipsy his star seems to be lately. As for his other star, she’s still trying to figure things out with her new relationship. Rayna’s intense conversation with Deacon is interrupted by an intoxicated Juliette. Things go south fast. Deacon storms away from Rayna and quits Juliette’s band.

Juliette is in need of a new guitar player before taking the stage at the party. Avery volunteers his services. Juliette sings a tune called “Used,” as it's quite fitting to her current situation. Scarlett is shocked to see Avery up on the stage. Juliette feels her fill-in guitarist wasn't half bad. She gives him a kiss on stage and tries to take him home later that night. Avery doesn't think it’s such a good idea. As Jolene tries to nurse her hammered daughter back to a sober state, a call comes in. It's Dante. Juliette's face shows deep concern when the man who scammed her mentions that he has some kind of tape.

Scarlett learns that Gunnar has been using his brother's songs as his own. On the political front, Coleman lets Tandy know that he's not interested in being anyone's pawn. He resigns from his post as deputy mayor. Needless to say, Teddy is completely ticked. Coleman’s wife believes this was the right move. Her husband can swoop in to claim his rightful post after Teddy, Tandy, and Lamar duke it out amongst themselves. Finally, Deacon lets Rayna know that he doesn't know what she's hiding from him, but it doesn't matter. All that matters is that they love each other. Rayna admits that she loves him so much as they kiss passionately. 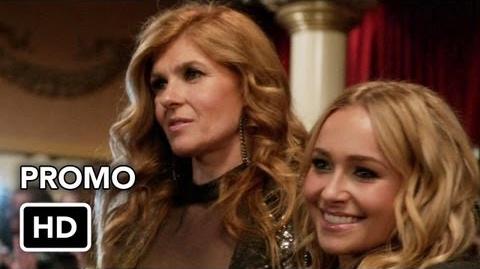