Where the Night Goes

Where the Night Goes is the fifth episode of the final season of Nashville.  It was written by Liberty Godshall and directed by Devon Gummersall. It aired on February 1, 2018.

Having told Avery that she was raped as a child, Juliette now worries that every choice she has made since has been affected by that event and she wishes things had been different. Avery worries she is referring to their relationship and especially when she does not immediately shoot down his questions. Things come to a head later on when she informs him that Darius has advised her to take part in an outreach programme in Bolivia, helping children in a position similar to what she went through. Avery calls her out for being obsessed with the church to the point where he and Cadence do not matter to her any more but she just walks off.

Meanwhile, Deacon and Jessie have food at a diner and then are about to go at it in the car until they realise they do not have the necessary protection. They decide to arrange another date and he eventually goes to a pharmacy to purchase condoms along with other items to hide his embarrassment. However, while he is over at her house and they are about to have sex, he breaks down crying as all of his memories of Rayna come flooding back. Jessie comforts him and they bond further over ice cream as he reveals that he did not have a great relationship with his own father and always wondered what it was like having a son. The following morning, Jessie wakes up on the floor next to him and is hurt when he attempts to make a swift exit. She knows that she will never be able to replace Rayna but Deacon asks her not to give up on him.

Will, Avery and Gunnar are gelling better as a boyband following their performance at Nashfest but realise they are still missing something, so they decide to search for a female singer to complete their line up. After being unimpressed with what they see, they come across a singer whose voice impresses them. They introduce themselves to her and find out that her name is Alannah. After chatting with them about her past, they say their goodbyes and later inform her that they want her to join their band, which she accepts. She later joins them onstage for their first performance as a quartet.

Elsewhere, Maddie is having trouble with Jonah's ex-girlfriend Mia, who has released a music video denouncing her. The paparazzi will not leave either teenager alone and when Jonah shows up later at the Conrad house he apologises to Maddie, stating that he hates the sort of life he has and wishes he could give it up. He invites her to his EP launch that evening and afterwards instead of hanging around they head to an old folks' home for a round of bingo before purchasing donuts for the customers in a donut shop.

Back at Juliette and Avery's house, Juliette wakes up to find Avery is not beside her and discovers that he has been sleeping on the couch. She tells him that she needs him more than anyone and when the latter wakes up in their bed the following morning, Juliette is not there. He calls out for her and gets no response before trying her cellphone, also getting no response. It appears that she has taken Darius' advice and left the country. 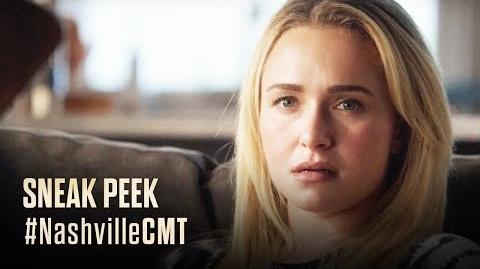