Where He Leads Me

Where He Leads Me is the eighth episode of the first season of Nashville. It was written by Jason George and directed by Wendy Stanzler. It first aired on December 5, 2012.

The episode begins with Rayna and her team relieved and happy after the performance with Juliette; they performed together and everybody survived! And it was awesome! Marshall agrees to release Rayna’s next new album. Liam is now welcome into the brand. Teddy is still a bit off and wants to talk to Rayna at home. He tells her about the pictures with Peggy. He tells her that he is winning and so Coleman is trying these stunts. Rayna asks if really all this is fabricated and Teddy assures her that there was nothing between them. He lies to her saying that Peggy had some problems with Robert and the pre-nup and she wanted someone to talk to.  He doesn't tell her about the money laundering situation. Rayna is finding it hard to believe that Coleman would do such a thing.

Sean arrives at Juliette’s. He tells her that he wants her to meet his father at the church tomorrow. She agrees but just after he leaves she is a little confused. Deacon arrives by the poolside to meet Cy. He wants Deacon to hit the road with them when they leave. Deacon wants to think about it. Cy wants to know what ties him down to Nashville. Haley tells Scarlett that there is a band that is looking for lead singers and that she should give them a call. Scarlett tells this to Gunnar. Gunnar is not too happy to hear it and asks Scarlett if she is considering it. She tells him that she wants to write; but it is clearly visible that she is tempted to give it a shot. Dominic Wells likes Avery and his band and asks him to fly down to Atlanta.

Avery is happy. Rayna arrives to meet Coleman. He tells her that Teddy and Lamar are spreading so many lies about him that now even he has decided to play dirty. He shows her the pictures and asks her what they look like to her. Juliette arrives at the church and meets the Butlers. Dana, Sean’s sister is her greatest fan. She wants Juliette to sing in the choir with them. Juliette agrees. Rayna talks to Tandy and wonders whether Teddy is really having an affair. She assures Rayna that Teddy is a wonderful husband that that he would never do such a thing. Peggy arrives to meet Teddy and she is a mess. She tells her that she told Robert the truth and that he did not believe her and he is flying down from Hong Kong. Teddy tells her to leave as she is not supposed to be around him.

Teddy says that he is sorry and leaves. Avery arrives to meet Scarlett and tells her that he is going to Atlanta. He has brought her a bottle of wine. She wishes him luck. At the church, the Butlers invite Juliette for lunch and she happily agrees. Lamar, Teddy and one more person are in a meeting and Tandy and Rayna arrive. Rayna is pissed that they are having a meeting which involves her entire family and they did not want to include her. She is staying. Teddy agrees but just then they see that Coleman is tired of waiting; he has released the pictures to the press. Gunnar confronts Hailey about her telling Scarlett to join a band. He knows that she is trying to separate him from Scarlett. She tells him that she could clearly tell that he still likes Scarlett.

She says that it is over between them and leaves. Juliette arrives at the Butler’s and she brings Dana a pair of cowboy shoes that she (Dana) has wanted for a long time. Gunnar arrives at the bar and tells Scarlett that she is really talented and that she would make a great singer. He then moves on to tell her that he has liked her since the day he first saw her. He kisses her. Rayna arrives at Peggy’s house and sees a crowd gathered in front of it. A woman tells Rayna that Robert found Peggy; she took pills and tried killing herself. Rayna arrives home and tells Teddy about Peggy’s suicide attempt. She thinks that nobody would try to do something like this for no reason. She is now sure that there was something between them. Teddy tells her that there was no affair; he then tells her the truth about the deal and how they had laundered the money.  Rayna is shocked that Teddy stole money from the bank. She tells him that these are crimes and that he did all that for himself and not to protect his family. She doesn't trust him anymore. Sean’s mother tells Juliette that she has read about her and her mother and that Juliette will never be brought into this family. Juliette tries to tell her that she genuinely cares about Sean. Rayna confronts Tandy that she did not tell her about the embezzlement. She is pissed at her sister. Deacon arrives at Juliette’s and tells her that he has been given an offer from the Revel Kings to go on a tour with them. Juliette is happy to hear this and feels that Deacon should take up this opportunity. He then hands over a letter to her from her mother.

Juliette is angry and wants to know why her mother is writing letters to him and he tells her that it is because Juliette is not answering her mother’s calls. She asks him to leave. Scarlett tells Gunnar that she is really confused and that she wants time to think and that they need to break their partnership for a while. On the flight to Atlanta, Dominic tells Avery that he wants to work with him alone and that he needs to give up on his band. Avery tells him that he and JT go back a long time. Rhodes tells him not to kill his career even before it starts and that he should listen to what Dominic is saying. Deacon arrives to meet Rayna; he wanted to make sure that she is all right. He wants to know the truth and she tells him that it is complicated.

Well, that is the last thing that Teddy was! He tells her about the road trip and she thinks that he should say a yes as it is an opportunity of a lifetime and that he should not miss it. Teddy is having a press meet. Rayna arrives and tells the press that she believes in Teddy’s love for her and their daughters and that she is confident that Teddy cannot be a cheater. She tells them that the photos are a way to bring down their family by the opposition and that she is not going to dignify it by commenting on them. Jeanne tells Gunnar and Scarlett that their first song is about to be released.  They are shocked. They drink to a very successful partnership. Deacon tells Cy that he is ready for the trip. Sean arrives at Juliette’s and she is looking beautiful. She tells Sean that last night she had a heart to heart talk with his mother. She then asks him, “Will you marry me?”. 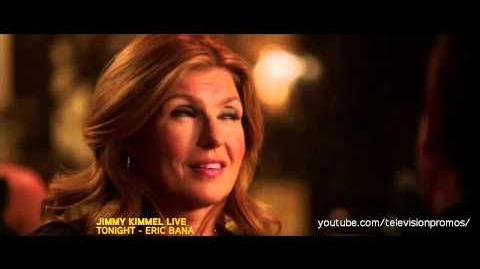 Nashville 1x08 Promo "Where He Leads Me" (HD) Winter Finale