When You're Tired of Breaking Other Hearts

When You're Tired of Breaking Other Hearts is the fifteenth episode of the first season of Nashville. It was written by David Gould and Jason George and directed by Paul McCrane. It first aired on March 27, 2013.

Maddie is hurting big time as her parents move forward with their divorce. Rayna is also having trouble with the situation. As difficult as it is, she finally takes off her wedding ring. In other news, Juliette is upset to learn that there’s no social media plan for her next release. She wants to modernize her PR. So she sends an invitation for a few hundred fans to come hear her sing at what was supposed to be an intimate event.

Teddy introduces Coleman as his deputy mayor. This has Lamar fuming. He’s further miffed to learn that the new city stadium will not be built on his land. His chat with Nashville’s new mayor is interrupted when Teddy gets a call from his daughter. Maddie deceives her dad so that she can sneak off to see Juliette Barnes sing at the event she tweeted about earlier. The crowd is way too big for such a small venue. Things get out of hand fast. Fixtures topple over injuring half a dozen fans. Deacon jumps off the stage to see that Maddie is amongst those hurt.

A still-grieving Gunnar lets Scarlett know that the fact that they slept together doesn't have to mean anything. He’s upset because the police don't seem to be working too hard to solve his brother’s murder. It looks to them like Jason was involved in a drug deal that went bad. He (Gunnar) blows off the audition Rayna set up with Marshall. Scarlett takes her banjo just in case Gunnar doesn't show up. She's reluctant to perform alone, but has no choice but to do so. She’s fantastic. Marshall is thoroughly impressed. Rayna is also quite pleased with her find, but gets word that Maddie is in hospital, and leaves before the song is over. Thankfully, Maddie’ll be okay.

Juliette is furious at her assistant, Emily, for what went down at her mini-concert. She’s also having issues with her mom and her counselor, Dante. She denies any knowledge of having ignored Jolene on the occasion of her first concert. The hits just keep on coming when Rayna calls to chastise Juliette for her role in what happened to her daughter. She wants her to take responsibility for her actions instead of trying to blame everyone else. Later, Juliette apologizes to Jolene for ignoring her years ago. She then heads down to the hospital to pay for the medical bills of all those who got hurt at her show.

Deacon feels he’s been saddled with a defective dog. A pretty vet named Stacey lets him know that cute pooch is just fine. She can’t believe Deacon hasn't named his new puppy yet. She’s also not a fan of country music. In fact, she hates it. It appears as though Stacey likes Deacon though. That’s why she sleeps with him almost immediately. Stacey feels like this was just a one-time thing when Deacon claims he has to skedaddle for a previous commitment with Juliette. She advises him to name his dog before walking out the door. Later, Coleman advises Deacon to stop trying to keep himself available for Rayna. He should take the pretty vet on a real date.

Scarlett comes home to see that Gunnar has been drinking up a storm. She worries that he’s looking for vengeance for his brother. So she fetches Deacon, and they head down to The Last Time Round, a seedy bar that’s been linked to the murder. They arrive just before Gunnar is about to head inside. Deacon knows the kind of pain he’s in. He advises him to not go to the same dark place he did after he made his best friend, Vince, drive drunk. By holding onto his pain, he (Deacon) had lost the one woman he ever loved through. He advises Gunnar that if he wants to hold onto something, he should hold onto Scarlett. Gunnar realizes that what he’s saying makes sense. He later lets Scarlett know that sleeping with her wasn't a mistake as he carries her into his bedroom. Next morning, while Gunnar sleeps, Scarlett gets word that she’s being offered a deal as a solo artist. "Welcome to the family," she'd told.

Avery isn't too keen on the sound Dominic has in mind for his music ("Nashville meets dubstep"). He voices his displeasure to Marilyn. Dominic overhears their little chat. He says the new sound stays. End of discussion. Avery decides to take matters into his own hands by swiping the mixes of his new tunes. He burns all the master recordings. He returns the car Dominic gave him and the money advanced to him, minus the cost of a bus ticket back to Nashville, and says farewell to Marilyn too. He says it's over. Dominic says it's not. He threatens to blacken Avery's name in the music business. Back at the Bluebird, Avery performs a song at the piano his way, making no fuss about having been announced under a slightly different name than the one we've known him by.

Rayna assures Teddy that she knows her girls are in good hands with him. She then has a heart-to-heart with Maddie where the two of them look to be getting back to their normal mother-daughter ways. Rayna presents Maddie the first guitar she (Rayna) had ever tried to play, a guitar that had been given to her by her mother, in hopes that it will help her (Maddie) get through what she's going through. Later, Rayna makes an appearance on Katie Couric’s talk show where they chat about the tour and her breakup. Back in Nashville, Deacon asks Stacey out on a real date. He says he named his male dog Sue. A dog named Sue. Stacey doesn't get it. She really, really doesn't like country music. But she likes Deacon enough to agree. 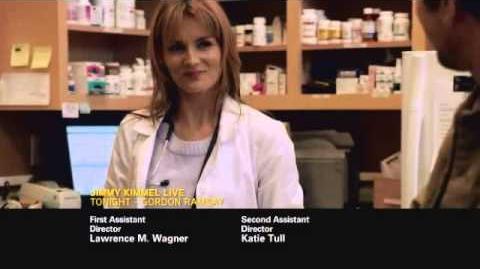 Nashville 1x15 Promo "When You're Tired of Breaking Other Hearts"