What I Cannot Change

What I Cannot Change is the fourteenth episode of the fourth season of Nashville. It was written by Taylor Hamra and directed by Lily Mariye. It first aired on April 6, 2016.

At the rehab clinic, a healthy and happy Juliette hands Cadence back to Emily after her visit. The doctor tells Juliette that she can go home and start adjusting to normal life again. Meanwhile, things are looking up for Highway 65 as well as they prepare to hold a showcase for Layla while The Exes are preparing to release their album.

Rayna's still worried about Vita since there's no lead on her whereabouts and she has no money and no family. There's nothing she can do about the situation and this is made clear to her when she goes to see the investigating officer, who tells her that they're still dealing with similar cases to Vita's. However, Rayna is determined not to give up.

Elsewhere, Frankie is still off his head drunk and fails to tell Deacon that it's the 15th anniversary of his sobriety. He's still angry about Deacon getting on the stage the night Riff played The Beverly. Things later come to a head when a drunken Frankie takes to the stage and makes a show of himself in front of the audience and his daughter. Deacon brings him offstage and they get into an argument. However, it ends with Frankie going to his AA meeting and confessing that he fell back on the wagon as Cash and Deacon look on.

Juliette arrives home and is handed a script for the latest Steven Spielberg movie and after reading it, realizes it's too good to turn down, even if it means spending less time than she already has with Cadence. She pays Avery a visit to tell him the news and asks if she can spend the evening with their daughter but Avery turns her down. However, he later decides to give her a chance with their daughter and as she rocks her to sleep, she sings to her while Avery cries outside the door.

Everything is looking up for Layla when she performs her set at Highway 65 to a very impressed audience and she meets singer Autumn Chase, who's looking for an opening act for her tour. The two decide to go see Scarlett and Gunnar perform at the Bluebird and they bond over personal issues. However, Layla discovers that Autumn has decided to choose Gunnar and Scarlett as her opening act.

Will is suffering from major writers' block and after Scarlett and Gunnar bail on him, he decides to chat with Avery. Avery suggests that he should look over some of his old songs. Will does just that and finds a song that he and Kevin wrote together. He decides to pay Luke a visit and asks if he can have his songs back as they're rightfully his. However, Luke is called away by Colt, who's at the army recruitment center as he needs Luke to sign a permission form since he's under 18. Luke reschedules the meeting with Will as he goes to try and talk sense to his son. Colt is determined to go along with his plan and even his grandfather lays into Luke. Luke eventually changes his mind and signs the form. When he later meets Will, he offers him a chance to rejoin Wheelin' Dealin' Records and Will accepts.

Juliette holds her first press conference since her return and announces that she is turning down the movie in order to spend more time with Cadence. Having learned that Juliette turned down the chance to work with Steven Spielberg, Avery shows up at her house with Cadence for an unscheduled visit and he hands over their daughter to Juliette as she thanks him for giving her the opportunity to spend the time with their daughter. 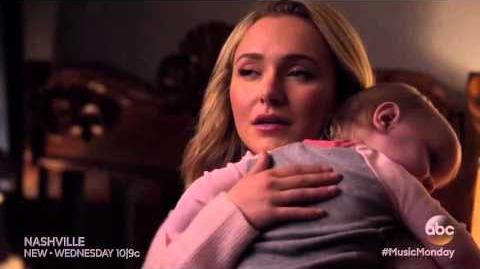