We Live in Two Different Worlds

We Live in Two Different Worlds is the fourth episode of the first season of Nashville. It was written by Todd Ellis Kessler and directed by producer Paul McCrane. It first aired on October 31, 2012.

The episode begins with Rayna and Deacon in bed, making love and a voice interrupts them. It is Teddy and he is waking up Rayna from her dream!

Two cops knock on Juliette’s door. She thinks they've come for her mother, but they've come for her. One of them says he's sure that she has seen the video; four million people have. It's a video in which Juliette is seen shoplifting. She asks them to get a real job and shuts the door in their faces. Tandy tells Rayna that Teddy is down the polls by 12 points. She then tells Rayna that Teddy has a fundraiser this week at the country club and Rayna says that she could sing. Good idea! Rayna’s daughter shows her the video where Juliette is seen shop lifting.

Juliette’s manager is going crazy and Juliette knows that her publicist, Makena, would say that any publicity is good publicity. Avery arrives home and Scarlett tells him that the phone isn't ringing and she is anxious to know what happened with the recording. They are about to make out when Gunnar knocks at the door. Gunnar tells her that they got the deal and she is excited. She hugs Avery, rather than Gunnar. But Avery doesn't look all that happy. Teddy arrives home and is happy to hear that Rayna will be singing at the fundraiser. But Rayna isn't happy as Teddy isn't telling her things. Teddy tells her that he isn't because he is trying to spare her! Juliette is having a tough time with her mother being around; she wants her to leave but she cannot till the hearing which is after seven weeks.

Makena arrives and tells Juliette that she needs to give a statement and that her fans deserve to know something; else there could be a huge fall out. But Juliette doesn't want any negative energy around her as she wants to prepare for her upcoming tour and so she says a “no” to the interview Makena scheduled with GMA. Next, Buck calls Deacon and tells him about the gig with Rayna. Deacon tells Buck that he is supporting Coleman. However, Deacon agrees to be there. Next, Scarlett and Gunnar are at the publishing house and Jeanne is showing them around. Gunnar then meets Hailey, Jeanne’s assistant. Scarlett then tells Gunnar that Jeanne wants to take them out for dinner and Hailey says that they do that with all the new writers.

Juliette is upset about the outfit she has been asked to wear for the CMAs (Country Music Awards); but Glenn tells her that she can attend the event but she is off the presenter’s list. Also that she is a butt of everyone’s jokes. Glenn tells her that if this continues, she will soon disappear from this industry. She asks him to schedule the GMA interview. During the dinner, Jeanne learns that Deacon is Scarlett’s uncle and she is impressed. She now knows where all the talent comes from. Scarlett tells her that she learned most of it from Avery, and complements his guitar playing too. But Avery tells her to stop. At the country club, Rayna meets Peggy; looks like they knew each other from before and they both look a little uncomfortable greeting each other. She is in the host committee. Teddy too is slightly awkward when he greets Peggy.

Outside, after the dinner, Avery is pissed with Scarlett and tells her that he doesn't want her help and that his music speaks for itself. Scarlett tries to tell him that she tried to do no such thing but Avery decides to walk home. At home, Rayna wants to know why Teddy didn't tell her that Peggy is on the host committee. She feels that Peggy still has the “hots” for him. Teddy dismisses that by saying that it has been 15 years. Rayna then tells him that all the women from the country club would make a better politician’s wife than she does. He tells her that he married her because she dazzles him. At home, Jolene makes macaroni for Juliette, but Juliette fells that her mother is hiding something in her bag and all this is nothing but just pretense.

But when she checks Jolene’s bag, she finds no drugs or stolen objects; in fact she finds a picture of her mother and her, when she was a newborn. Juliette breaks down in tears. Gunnar and Hailey spend the night together and Hailey tells him that there is going to be no pressure on him from her side and that they need not make it awkward at work. Hailey is leaving and Scarlett sees them together. Makena tries to prepare Juliette for the interview with Robin. She tells her that she shouldn't defend herself as it could make things worse. She tells her to be honest and that she needs to protect her image. Rayna is nervous about her performance at the country club and she wants to hold a cigarette. At the interview, Juliette explains what happened at the store. But then she is asked about her mother’s arrest and she walks out of the interview.

Deacon arrives and Lamar starts taunting him. Deacon points out that he is there only for Rayna, doing a favor. So he is definitely not going to suck up to Lamar. He remarks that that is Teddy’s job. Teddy feels insulted and the two of them get into an argument. Rayna intervenes and puts an end to it. The GMA interview is all over the Internet; walkout included. Makena knows that when the label sees this, they are going to be toast. Juliette wants to know how bad it is and Glenn tells her that the sponsors are bailing out of the tour. This means that the tour is off for now. At the fundraiser, Rayna and Deacon begin their performance and Peggy signals Teddy to come aside with her but he refuses. Also, Teddy and Deacon exchange fierce glances with each other.

After the performance, Rayna talks to Deacon and tells him that he is destructive. She doesn't understand why Deacon did that. Deacon says that he thought that she needed him and she says that she does. They both say they don't know what to do. She adds that now she needs to go home. So they are done there. At home, Teddy tells Rayna that he cannot deal with it anymore. She tells Teddy that she is going to fire Deacon.

Avery returns home and Scarlett tells him that she really wants to write and she'd love it if he would support her as she supports him. Avery tells her that he is trying.

Teddy arrives in a deserted place to meet Peggy. He thanks her for coming. She tells him that last night she felt sick at the way he behaved. She tells him that it is time that they come clean on their own terms. He says that this cannot happen as his campaign, his marriage, everything will be ruined; her marriage too.

Next, Glenn (Juliette's manager) tells Juliette that things between them aren’t working. He is planning to leave her. She tells him that she wants her tour back and her image restored and she will do whatever it takes. She assures him that she will listen to him. Glenn requires her to tell him honestly why she took the nail polish. She says that she used to do that when she was a kid as it assured her that she could take care of herself when nobody else would. Glenn tells her he will see her tomorrow morning, and they'll re-group. Juliette calls Deacon and he asks her if they can meet. 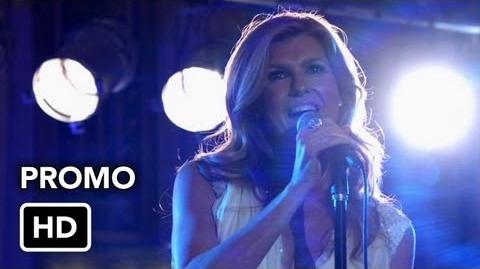