Two Sparrows in a Hurricane

Two Sparrows in a Hurricane is the tenth episode of the final season of Nashville.  It was written by Michael Weintraub and directed by Ellen S. Pressman.  It aired on June 14, 2018.

At the Jaymes-Claybourne house it is breakfast time and the first day of auditions for Nashville's Next Country Star but Daphne does not want Deacon to take her after everything that went down with Brad so Maddie volunteers to do it instead. When she arrives, she is the youngest person there and quickly makes friends with a young boy who is very excited. They are introduced to their mentors and Daphne is mentored by Ilse de Witt, who is encouraging and maternal. However, Brad is ready to exploit her since she is Rayna Jaymes' daughter and asks her to write a song about her as it will help the audience to connect with her. Daphne is unsure of this.

Later, Deacon finds Daphne in her room looking at photos of Rayna and notices that she has been crying. He offers to take her to her audition the following day and Brad gets Daphne to perform the song she has written about her mother. Brad stops her mid-song asking her to be more specific about what she is trying to say and, although horrified, Deacon claps encouragingly. As he and Daphne talk later, he brings up his discomfort but Daphne insists that Brad is helping her. Deacon says he is exploiting her but Daphne says she should be writing about what she is feeling. Deacon agrees but says she should not be doing so until she feels that she is ready.

Meanwhile, Jessie and Deacon go to see a very expensive lawyer who is all for getting Jake to testify against his father, which Jessie is against. Deacon wants to pay for it but Jessie is against it and they end up fighting with her saying that he is trying to rescue her. She says that it is her fault as she always finds herself in this position and needs to figure all of this out on her own. She says that she cannot put Jake on the stand and they agree to end their relationship. After Deacon leaves the house and gets into his truck he starts to cry.

Elsewhere, at the ranch, Scarlett tries to convince Sean to a play at a coffee shop which she insists will be quiet. However, when they get there it is packed and he tries to bail but is called to perform. Taking to the stage, his PTSD kicks in but he manages to get through the performance, which leaves Scarlett in awe. Afterwards, she tells him he should get his voice out there and he mistakenly takes this as a sign to kiss her. She is shocked and embarrassed he rushes off. When she catches up to him, he reveals that he was a terrible soldier and he saw his best friend get his jaw shot off and die and felt helpless the whole time. He says his friend died because of a round that was meant for him, walking off and leaving Scarlett in tears. Later, she apologizes for pushing him but he seems in a better mood and want to keep singing. He asks her why she is not singing and tells her she is living in the past too.

Meanwhile, things seem to be in a better place with Avery and Gunnar as they have a cup of coffee and chat about Avery's situation with Juliette. He thinks that every time the doorbell rings it will be her and Gunnar says that whenever he needs someone to talk to he can come over and be there. However, things go from bad to worse as at band rehearsal, Alannah is making eyes at Avery, which does not go unnoticed by Gunnar. Afterwards, Alannah tries to make plans with Avery but he is going home to be with Cadence. Later, Avery calls Gunnar and asks him to come over but Gunnar says he is meeting some people when he is actually heading to Alannah's with a bottle of wine. She ultimately brushes him off and they break up.

The next day, Gunnar passes off the breakup idea as his to Avery and Alannah shows up at the latter's house under the pretence of returning a jacket and they end up going out for a drink, where they get chatting about relationships, which ends in Avery kissing her. They arrive for the gig still canoodling and Gunnar takes his anger out when he sees how close they are onstage that he drops his drumsticks and storms offstage. Avery tells Alannah they screwed up but the latter says she is tired of the girl always getting the blame so she leaves. She ends up going to see Brad who encourages he to ditch her bandmates and he hands her a check. Avery shows up at Gunnar's house banging on the door to try and get him to talk to him.

At the taping for Nashville's Next Country Star Daphne takes to the stage to perform the song she wrote and gets all yeses from the judges. When she gets backstage she breaks down crying in Deacon's arms. 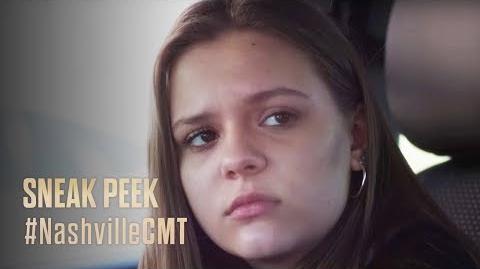