Tomorrow Never Comes is the tenth episode of the second season of Nashville. It was written by Meredith Lavender & Marcie Ullin and directed by Patrick Norris.  It first aired on December 11, 2013.

Juliette is the main act at Teddy's first annual Music City Festival, but the media hounds her over her relationship with Charlie Wentworth.  She tells Glenn to find out who leaked the news to the press.  Jeff corners Layla about the incident and tells her that if she had anything to do with it, he will drop her from Edgehill.  Rayna hears a rumor that Edgehill wants to release her record without her consent and storms to Jeff's house to confront him while he's skinny dipping with a mystery woman.  Luke also wants to be her boyfriend but Rayna isn't so sure.

Gunnar is forced to play a set next to the port-a-loos and Deacon discovers that his name isn't on the list at all.  They decide to team up to play an unauthorized show outside the festival grounds but they're approached by Teddy and the police.  However, they allow the show to go ahead.  Charlie is also at the festival and he and Juliette are trying to figure out who leaked the story of their affair to the press.  Juliette suspects that Layla had something to do with it and confronts her about it but Layla denies everything.

Tandy wants to go into business with Rayna but the latter is surprised that Luke is hanging around in Jeff's pocket as all he wants to do is earn money and make music but all she wants is artistic autonomy.  She's determined to go $20 million dollars into debt in order to get her master tapes back.  Meanwhile, Luke plays a steamy set and is torn between Layla and the person he truly loves, the male Edgehill assistant.  Later, Will ends up in bed with the assistant.

When it comes to Juliette's time to perform, she's rattled by the "Homewrecker" signs in the crowd until Avery comes to her rescue and they finish her song together.  Afterwards, she takes out her anger in her dressing room and she and Avery bond, before she announces to the press that she wants her private life to remain private.  Zoey attempts to apologize to Scarlett but the latter refuses to even look at her.  Later, Zoey and Gunnar almost break up before deciding to give things another try.  At Deacon and Gunnar's show, Rayna is having secret thoughts about Deacon and Avery is thinking the same about Juliette, even though Scarlett admits he's the only one who has been honest with her.  He wants to split up with her but can't since she's upset about Zoey and Gunnar being together.

Later, Juliette goes to Avery's room to confess her love for him but finds Scarlett with him.  Tormented by his liaison with the assistant, Will decides it's best to end his own life by standing in front of an oncoming train.  While this is happening, Teddy and Peggy are heading home together as Rayna is too and he's approached by a man who suddenly draws a gun.  A shot is heard and when Rayna and Teddy turn around, they see Peggy lying on the ground. 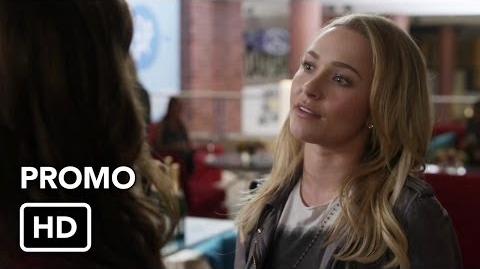