Start a Wiki
This Just Ain't a Good Day for Leavin' is the seventeenth episode of the third season of Nashville. It was written by Paul Keables and directed by Michael Lohmann. It first aired on April 8, 2015.

After shooting Pete, Sadie is brought in for questioning and the police wonder why she was in possession of an unregistered firearm. She asks to make a phone call and contacts Rayna, who sends her lawyer. Soon, she is free to go but the police tell her to stay in town, even though she had a restraining order. Rayna tells Sadie to stay at her place and Sadie says she got the gun to feel more in control.

Daphne has a lot of questions for Deacon about his cancer and it makes Maddie angry, so she phones Teddy to come and collect her. When he arrives, he tells her not to push Deacon away. Maddie makes Teddy promise that he can't get sick until he's old and he promises not to go anywhere.

Avery is still on tour while Juliette is texting him lots of baby names. She is having her baby shower and Rayna is supposed to be in charge but is dealing with Sadie's situation. She's freaking out because no one is coming and she starts tearing the place apart. When Rayna arrives, Juliette starts yelling at her about Layla and Sadie getting all the attention and she knows she's less important. Then Rayna freaks out and says Juliette has no idea what's going on in her own life and how strong she's trying to be for a lot of people. Suddenly, Juliette's waters break and Rayna takes her to the hospital. Avery gets the news and rushes to be by his wife's side.

As Rayna leaves the hospital, Sadie phones her to tell her the charges have been dropped. She says she needs to go back to Virginia to have time to herself. Luke told the police he saw the whole thing and it wasn't her fault. Sadie drops by to say goodbye to him.

Gunnar and Scarlett argue about her spending the night with Caleb. He later apologizes for his behavior but says that he can't believe she slept with Caleb on their second date and she points out he slept with Zoey, her best friend. He says that was because she turned down his proposal and she says she waited for him to come back but he never did. Since Avery is absent, Gunnar changes the song list to include a duet and Scarlett tries her best to avoid him onstage, but afterwards he says he felt a connection. However, she says all she felt was the music.

Bucky runs into Luke and asks him to hear an Internet artist. Luke is impressed and signs him to his label. Natasha is pestering Teddy for the money and stalks him. The private investigator has dug up dirt on the financial guy and Teddy calls him to his office. He shows the guy photos of him with his secret family and the guy says he will get the $500,000.

As Sadie leaves town, Luke faces questions from the press, Deacon gets an appointment about an MRI and Scarlett and Gunnar sit on opposite sides of the bus, ignoring each other. At the hospital, Avery and Juliette sing to their newborn daughter and Juliette says she's thought of a name as the episode ends. 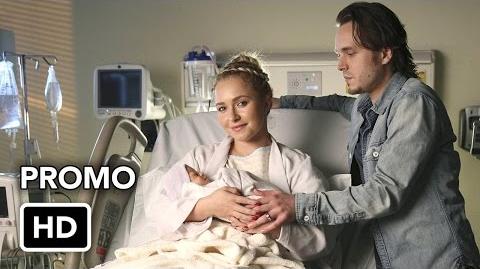 Retrieved from "https://nashville.fandom.com/wiki/This_Just_Ain%27t_a_Good_Day_for_Leavin%27?oldid=23585"
Community content is available under CC-BY-SA unless otherwise noted.