There'll Be No Teardrops Tonight

There'll Be No Teardrops Tonight is the thirtheenth episode of the first season of Nashville. It was written by Todd Ellis Kessler & David Marshall Grant and directed by Eric Stoltz. It first aired on February 13, 2013.

Rayna is still reeling from the news that Teddy wants a divorce. Everything is happening so fast. The plan is to tell the girls the moment she gets back home. Rayna is stunned to see that Liam is staying at her hotel. Of course, Deacon is there, too. With so much happening in her life, Rayna misses her cue onstage for probably the first time ever. She pulls it together to sing “It’s My Life” to an adoring crowd. Still, everyone behind the scenes notices that Rayna Jaymes is not at the top of her game.

Deacon has never seen Rayna miss a cue in 20 years. Something is wrong. Rayna can't talk about it with him for fear of losing it. However, she has no problem taking a break with from her life with Liam. They drink up a storm at a bar until a few of the locals recognize Rayna. They then head back to the hotel where they share a kiss in the hallway. Rayna stops herself for a moment, but ends up following Liam into his room. There’s more drinking and more kissing until Rayna excuses herself to the bathroom. She touches up her face, but it’s all for naught once the tears start flowing.

Juliette is moving forward with making drastic changes to her brand. Glenn tries to reel her in, but it’s just not happening. Juliette is a force, but that doesn't stop Glenn from going behind her back to tell her crew that all changes must go through him first. Deacon becomes privy to this info and lets it slip to Juliette. BAM! BAM! BAM! Juliette slams her hand on all the hotel room doors in the middle of the night. She assembles her sleepy crew in the hallway to let them know that they take orders only from her. It’s quite a scene that ends with Glenn letting Juliette know that he’s done. He quits.

>Rayna eventually lets Liam into the bathroom. They chat about how difficult divorce is on a family. Liam lets her know that there’s no way around the fact that telling her girls is going to be incredibly hard. But looking back on his own life, his parents’ divorce was the best thing that could have happened to him when he was a kid. In other news, Deacon tells Juliette that he'd also quit if she ever talked to him the way she talked to Glenn. He’s later taken aback when he catches sight of Rayna with Liam in the hotel lobby. As for Juliette, she reaches out to her mom to say she can stay with her once she gets out of rehab.

Avery is frustrated with the way things are going with his career. He’s just not diggin’ the tunes Dominic wants him to play. He’s also staying in a rundown motel because he doesn't want to sleep with Marilyn anymore. On the bright side, Hailey says South Circle would give him a six-figure advance if he teams with them in a publishing deal. She tells him that Gunnar and Scarlett are just songwriters; but he's the full package, and that it would be good for her own career if she signed him. Marilyn advises against taking the easy money for something that could be worth millions later. Avery knows she can always find another young singer who might make the big time, but he needs to look out for himself. That’s why he signs away his publishing rights for a hundred grand.

Gunnar approaches the kitchen wearing a couple of towels. Scarlett asks him if he's forgotten the rule about not being naked..Then she gets a call letting her know that Rayna wants to sign her and Gunnar to her new record label. They hug. Gunnar rescues a towel. Scarlett remains happy. In other news, Gunnar’s brother shows up in town claiming to have ditched the gun he picked up awhile back. He needs a place to stay. Scarlett is dead set against harboring a fugitive, but Gunnar talks her into letting his wayward bro crash at their place for one night. Jason makes some tasty hole-in-one eggs for his brother for breakfast. Later, he joins in on guitar as Scarlett and Gunnar perform “Casino.” Scarlett tells Gunnar that his brother can stay with them a little longer if he wants. Neither of them knows that Jason never did ditch that gun.

Tandy realizes that Teddy is still in contact with Peggy. Maddie does, too. She overhears her dad having a revealing phone conversation with Peggy. A short time later, Maddie and Daphne are thrilled to have their mom finally home. Their parents break the bad news about the divorce. The girls are devastated. Later, Maddie seeks out her mom. She lets her know that she overheard her dad on the phone. She lets Rayna know that Teddy has been seeing Peggy behind her back. 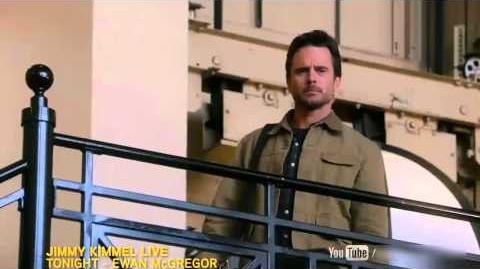