Nashville Wiki
Register
Don't have an account?
Sign In
Advertisement
in: Episodes, Season 5 Episodes, Episodes Airing in January,
and 2 more

The Wayfaring Stranger is the season premiere of the fifth season of Nashville. It was written by Marshall Herskovitz & Ed Zwick and directed by Callie Khouri. It first aired on December 15, 2016 and was re-aired on January 5, 2017.

The episode opens with Rayna pulling up to a gas station for a refill. The attendant recognizes her and asks for an autograph, which she gives to him. She then hears a mandolin playing and notices a blind man playing it. She approaches him but he says she's too young to know what it is. She says it's "Wayfaring Stranger" and asks him to continue playing it.

In a jump to three weeks previously, in a darkened field Juliette's plane has crashed and a panic-stricken woman comes across the scene, while ringing the paramedics for help. She cannot see any movement until she notices Juliette still strapped into her seat, seriously injured. She covers her with a cloth and sings to her, telling her that the paramedics are on their way. She is soon rushed to hospital, while her friends all learn of the accident. While watching a news report on the crash, Maddie, Daphne, Rayna and Deacon learn that Juliette was the only survivor onboard.

Hours later, she awakens in hospital and is confined to a wheelchair. She hardly talks to Emily and Glenn and when a doctor comes by, she is unable to feel any sensation in her legs and is told that she suffered severe fractures on her spine but is lucky to be alive.

Back home, Rayna prepares to fly to Silicon Valley to meet a young entrepreneur called Zach Welles. Since Highway 65 still has financial problems she hopes the meeting will give her the boost to get everything back on track. Maddie is also home and trying to write another song, which Daphne says she can help with but her older sister shuns her. Maddie seeks help from Deacon but when Daphne interrupts them and suggests a lyric, Maddie says she's trying to distract her and Deacon. Deacon tells her off for what she said but it seems to have no effect on Maddie.

Before departing for Silicon Valley and having successfully got Maddie released from her Lennox Hill contract, Rayna heads to the hospital to check on Juliette. Juliette is still despairing over the fact that she's in a wheelchair but reveals that a guardian angel saved her when the plane went down and she hums the song that the woman sang. Rayna says that the song is beautiful and says that everything will work out for her.

Rayna heads to Silicon Valley but when the plane hits turbulence she suffers a panic attack. After arriving at her hotel, Deacon phones her and she reveals that she had a panic attack. He asks if he should fly out to be with her but she says that she's okay. She later meets with Zach Welles, who turns out to be a huge fanboy. She performs for a large corporate audience but finds that they're not so receptive to country music. Afterwards, he apologizes and they chat about her career. He asks why she's no longer making music and she says it's because she feels she has nothing to say.  Rayna and Deacon chat again and she tells him that she cannot risk flying again after her panic attack.

Back home, Scarlett and Gunnar hang out with Deacon and the girls. Daphne sings a bit of the song that Maddie wrote, leading to her sister accusing her of stealing it. Scarlett goes to have a chat with Maddie and tells her to remember the bond that she and her sister will always have, no matter how angry she feels with her. Later, Maddie talks to Daphne and asks if she can hear what she was singing because she liked it. Scarlett suggests that they should sing it together which they do.

Meanwhile, Avery brings Juliette home from the hospital, while the media waits outside. He offers to help her as much as she needs but she doesn't want to be seen as useless, even rejecting his help when she needs to go to the bathroom.  Later, she asks him if he can take her back to the crash site so she can see it for herself.  When they get there she rejects his help pushing her on the grass until hits a bump.  He lifts her into his arms and carries her the rest of the way.  When they get to the spot, she breaks down in his arms, asking why she survived when everyone else did not.

The following morning, Avery awakens in the car with Juliette looking at him.  She asks him to take her home and he kisses her.  At her hotel, Rayna gets a knock at her door and opens it to find Deacon, who has flown from Nashville to be with her. After spending time in bed, she makes the suggestion of driving home but wants to do it alone. While driving home, Avery and Juliette stop to buy smoothies. As Juliette waits, she hears a voice coming from the church across the road and pushes herself to it. When she gets inside, she sees the woman from the crash site singing the same song she was singing as she comforted her. As Deacon heads home alone, Rayna starts her journey, leading us back to the start of the episode. After talking to the blind man, she sits down beside him and starts singing along. 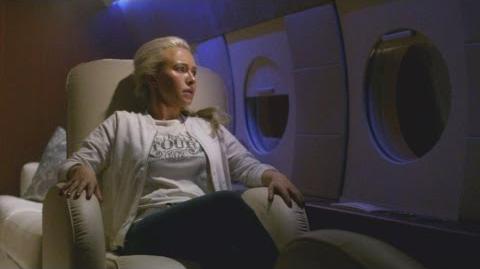