The Slender Threads that Bind Us Here

The Slender Threads that Bind Us Here is the fourth episode of the fourth season of Nashville. It was written by Monica Macer and directed by Joanna Kerns. It first aired on October 14, 2015.

It's the day of Beverly's funeral but rather than use the time to be together with family, Deacon shuts everyone out and refuses to talk to Scarlett.  Scarlett is trying to deal with the loss of her mother and Zoey, who's back in town for the funeral, provides a shoulder to cry on.  They have a chat and Scarlett realizes she's not getting any comfort from Caleb.  Deacon takes his frustration out on a mirror and thrashes Beverly's room, as Maddie stands at the door.

Meanwhile, Juliette is still oversleeping, ignoring her family and missing press opportunities.  Jeff tells her to get her act together and arranges for a reporter to follow her around for a few days to find out what it's like to be Juliette Barnes.  Juliette hones her acting skills by working out in the mornings and pretending that she really cares about her fans.  However, on the sidelines she's popping Adderall and sleeping pills.  Back in Nashville, Avery is missing her but is finding comfort in Emily's help.  She's taking care of Cadence while Avery searches for work and he meets Markus Keen and offers his services as a producer as he thinks he wil be a good fit for Markus' transition to country.

While conducting an interview with a radio DJ, Juliette is shown a photo of Avery, Emily and Cadence together at the park and is furious.  After her interview, she phones Emily and lashes out at her, calling her a cheating whore.  Rayna is preparing for a performance at the Opry where Layla will also be taking to the stage.  Deacon decides he's not going because he doesn't want any more sympathy.

The night of the performance, Layla is nervous about taking to the stage at the venue for the first time.  Rayna brings Markus along to meet a few people and generally get a feel for the world of country music.  He crashes the stage when Rayna is about to perform with Layla and when he suggests doing a duet, an angry Layla storms offstage.  Rayna isn't pleased about him stealing her moment and feels he not only disrespected Layla but the Opry in general.  She's still prepared to have him on the label and he agrees to take Avery on as his producer.

Elsewhere, Caleb is worried that he may be losing Scarlett and reaches out to Gunnar for help writing a song.  Gunnar agrees and the end result provides Scarlett with the comfort she needs.

In the middle of his meeting with Markus, Avery gets a phone call from Emily, who says Cadence is in the hospital with a high fever.  When Avery phones Juliette to tell her, a party friend answers but when she tells Juliette, Juliette, who's passed out on the bed, says she doesn't care who it is so the friend passes on the message to Avery, making it seem that Juliette no longer cares about their daughter.  Avery realizes that the Juliette he once knew may never come back. 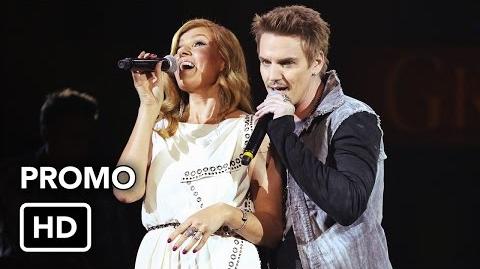