The Night Before (Life Goes On)

The Night Before (Life Goes On) is the eighteenth episode of the fifth season of Nashville. It was written by Geoffrey Nauffts and directed by Michael Goi. It aired on July 13, 2017.

As Daphne puts on her make up and listens to music in her room, Deacon tells her that he is leaving the house in a few minutes as he is on the phone to a woman who tells him that Liv has been placed with a foster family. She then asks if he has an item of clothing of Rayna's for that evening's charity auction. He tells the girls about Liv's situation and then says he will be auctioning off something of Rayna's for charity. They are against it until they see it is a coat that they hated on her and give the all-clear for it to be auctioned off.

Meanwhile, as Avery prepares to head out on tour, he excitedly tells Juliette that Cadence started talking, pointing to her toy rabbit. He is reluctant to leave as he does not want to miss any more of his daughter talking but Juliette tells him she will keep him updated on everything. Later as Avery checks into his Atlanta hotel and chats to a waitress, Juliette contacts Kesha's choreographer to help her get into shape for filming the music video for her new single but while she is rehearsing she starts to feel strange and ends up collapsing. The choreographer tells her that she needs to get into the mindframe of dancing as who she is now and not who she was prior to the accident. Still worried, she attempts to contact Avery, who has just finished a gig and is partying with his bandmates. Noticing that he is drunk, Juliette is unable to tell him what happened to her and gets a shock when the waitress tells her that she is interrupting his drinking time.

Daphne is invited to a party along with Flynn but when they arrive at the house, they discover that the parents are absent, which gives the teens present an excuse to make out with each other. Flynn joins Daphne out on the swings and he talks about his love of birds. They both laugh over the way the party turned out and agree that they would rather be held back if that is what ninth grade will turn out to be like. When she gets home, she tells Maddie about her disastrous night.

Back in Atlanta, the waitress suggests going up to Avery's room to "fix the TV" but he rejects the offer. However, when he phones Juliette back, she gets suspicious when he takes the call in the bathroom. He decides to give her the phone to the repairman in order to prove that nothing funny is going on. Juliette asks the repairman to put Avery back on the line. She tells him that he has to finish the tour or he will end up hating her.

Elsewhere, The Exes discover they are lined up for a commercial assembling a baby crib, which is part of Alyssa's branding job and seems like a good idea since Scarlett is pregnant. However, when they are filming it, Scarlett ends up breaking down. They ask if it can be changed to something else but unfortunately it is a no-go. Scarlett manages to pull herself together and they finish filming the commercial.

Deacon attends the charity auction where he bumps into Jessie Caine, who switches his placename to another seat since they have been placed next to each other. While dining, Jessie is approached by her ex-husband Brad, who passes a comment about their son. As the auction gets underway, Deacon finds it hard to cope with seeing Rayna's coat being auctioned off and leaves. Jessie receives a text message from Brad, commenting on Deacon's stepfather status, and joins Deacon outside, where she pours her heart out about how abusive Brad was towards her and their son, even trying to paint her as a bad mother. Deacon is called back inside to perform and rather than singing the song he originally was scheduled to perform, he changes it and dedicates it to Rayna. The women in the audience cry as Jessie sits back down to watch the performance.

Following shooting the commercial, Scarlett and Gunnar are driving home when she asks him to call into the supermarket as they need milk. As they are walking back to the car later, they are accosted by three youths who want them to purchase beer since they are underage. Gunnar tries to get them to go away until the lead youth pulls a gun on them, ordering them to hand over their money. Not wanting a fuss, Gunnar hands over his wallet and the youth orders Scarlett to hand over her purse. As she does so, she drops the bag of groceries and the youth gets angry when the milk spills on his shoes. He pushes her, stomach first, into a car and makes Gunnar get down on his knees, telling him he is a nobody. The youths then leave as Gunnar embraces Scarlett. 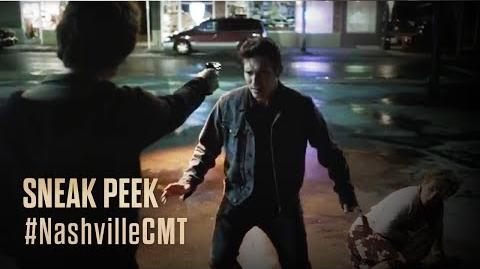