The House That Built Me

The House That Built Me is the twelfth episode of the final season of Nashville. It was written by Geoffrey Nauffts and directed by Timothy Busfield. It aired on June 28, 2018.

At the Jaymes-Claybourne house, Daphne is looking online at articles relating to her appearance on Nashville's Next Country Star and discovers that the nickname she has been given online is "Princess". Maddie is helping Deacon get ready for his radio appearance which includes a performance and an interview. Both girls are in the audience along with several college students. The appearance goes well and afterwards he is signing autographs for a crowd when he is approached by an old man who asks if they can get a cup of coffee. Deacon tells Maddie and Daphne they have to leave and the three of them make their exit.

The next day, Scarlett asks Deacon how the show went and he says it was fine until his father showed up out of nowhere. Scarlett has also heard horror stories about him from her mother but still wonders if Deacon is curious about why he showed up. However, Deacon refuses to talk about it. Meanwhile, Scarlett tells Sean she has arranged a gig for him at the Bluebird. He is reluctant to do it unless Scarlett gets onstage with him. He goes ahead with it but his wife, who's in the audience, walks out when he dedicates a song to Scarlett.

The following day, Scarlett pays his wife a visit and tells her she does not want to be with Sean but only wants to help him. Sean's wife said that she has hated living in limbo and after a year of trying to comfort him whenever he has woken up at night screaming and walking on eggshells she admits that she is over it. However, Scarlett is convinced that he is changing and later sends him over to see his wife and son. Things take a turn for the worse when he freaks out at a friend's Facebook page and starts banging his head against a wall. His wife calls Scarlett to come over and when the latter does she finds that Sean has barricaded himself in the bathroom with a gun. Scarlett goes in to get him to stop his suicide attempt but Sean is in such a distressed state, lamenting the fact that he could not help his friend Derek. Scarlett tries to take his mind off things by getting him to look on the good things and they will eventually last longer and longer.

Elsewhere The Lost Highways are losing traction without Alannah. She is meeting with her new team and Brad suggests getting her an opening slot with The Lumineers, which she is excited about. He later tells her that they have heard her demo and want her on tour with them. They show up to meet them for drinks that evening but it turns out that Alannah and Brad are the only ones there. He starts making advances towards her and she becomes noticeably uncomfortable, so she rushes over to Avery's place. She tells him that it was obvious that Brad was coming on to her but if someone were to record it, it would seem innocent. However, when she goes to see Brad, he acts all innocent and says their relationship is strictly professional. They agree to meet for dinner but when she arrives at the restaurant she is told that the tour is off - a result of standing up to Brad. Later she performs at a bar and tells Avery the tour is off. To help her feel better, he suggests writing some songs together which does not go down well with Will and Gunnar.

As Deacon looks at an old photo, he reminisces about his childhood with his guitar and flashes back to his father beating his mother. He questions his father about why he is there and his father says that he lost his house in Hurricane Harvey and wants to start over, preferably somewhere he has family. Deacon thinks he only wants money but his father says that all he wants is to get to know his family and grandkids. However, when he says that he has changed a fight ensues, with Deacon calling him a "nightmare" and telling him it will never happen, before storming out.

Maddie thinks she knows better and does not want her grandfather to be homeless, wishing to meet him before he dies. Deacon gets mad, saying he knows what he is really like since he was raised by him. He then has more flashbacks of his drunken father hitting him. Maddie later apologizes saying she thought it would be nice to have someone new in the family after everything they have been through. Maddie knows better than anyone how mean she was to Rayna and how she did not want to be her daughter but she is glad they forgave each other. Deacon understands what she is saying but cannot get past what he and his father have been through.

Maddie goes to see her grandfather and they have a heart-to-heart. They talk about family and hold hands before she turns to talk about Deacon. She is told that Deacon cannot hurt him since he is a successful man and he tries to make a case for himself as a good father because he left when he realized he was turning Deacon in an angry young man like himself. In a flashback, Deacon points a rifle at his father, who is hurting his mom, and tells him to leave. Maddie takes him home to stay with them and he tells her and Daphne more about why he left - he thinks he was a father whether Deacon likes it or not. Deacon remembers that he basically became his father with his outbursts and drunken behaviour but his father points out that Deacon achieved more and was surrounded by people he loves.

As Maddie and Daphne later sing together, Sean's wife and Scarlett look in on Sean curled up asleep with his son while Will looks at old footage of himself performing and Gunnar gets frustrated at being unable to write. Deacon brings his father home and Daphne hugs the latter as Maddie looks proudly at her father. Meanwhile, Avery and Alannah are writing together and it is not too long before they are making out together. A few seconds later, Juliette walks in on them which leaves Avery shocked. 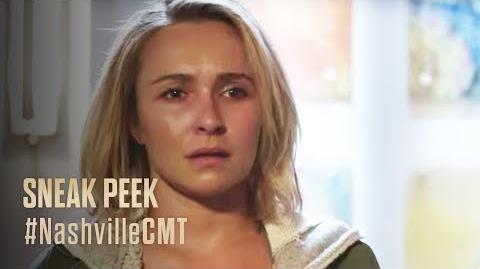