That's the Way Love Goes is the fifteenth episode of the third season of Nashville. It was written and directed by Callie Khouri. It first aired on March 4, 2015.

Deacon and Maddie are having a chat and she's still pestering him about why he isn't with her mother. He says he will love her until the day he dies. The girls are excited Rayna is allowing them to sing with her onstage and Rayna tells Maddie that she knows she wants them to be together but she doesn't know what that looks like.

Will is doing a photo shoot and is surprised about Jeff's firing. Luke wants Will to meet with a songwriter called Kevin Bicks, who is gay. Will isn't keen on the idea and acts like a complete jerk when they meet. Kevin wants to know if it's because guys like him used to beat up guys like him and Will tells him he's also gay and that his father threw him out when he told him, so they write a song about it.

Scarlett, Avery and Gunnar are the opening act for Rascal Flatts but still need a band name. Scarlett goes on a date with Caleb but bores him when she can't stop talking about medical matters. He thanks her coming, saying he thought they were on a date. She says she can't handle being the only one who knows about Deacon's cancer as it's too much to handle and later apologizes for her behavior, inviting him to come see her perform with Avery and Gunnar.

Luke's son, Colt, is visiting and Colt says he wants to see Rayna and Maddie performing at the Grand Ole Opry. Luke says he'll tag along. Jeff is getting used to his role as Layla's manager but is being mean to her before kissing her.

At the Opry show, Vince Gill is in attendance. Things get a little tense when Luke sees Deacon arrive. Layla is announcing her new single on iTunes that no one, not even her label, knows about. Teddy is also there and runs into Natasha. She says he hasn't been returning her calls and that she's being watched by law enforcement as there's a surveillance van outside her house, so they would have seen Teddy entering and leaving her house.

Rayna takes to the stage and introduces her daughters before Deacon comes onstage. When Maddie and Daphne leave, Deacon joins Rayna for a moving duet, which makes Luke visibly uncomfortable. As the song ends, Deacon leaves the stage without a word.

Gunnar is freaking out about the fact that he, Avery and Scarlett haven't come up with a band name. When Scarlett introduces Caleb to them he refers to Avery and Gunnar as 'the exes', which makes Gunnar think of the name 'The Triple Exes' as a band name. They get the news that Rascal Flatts want to book them on their tour dates for the next six months.

Meanwhile, Sadie has been booked to appear on "Good Morning America" to discuss her relationship with Pete and the lawsuit. She tells Rayna she doesn't want to be the poster child for domestic abuse and that evening she sees a story about a woman who died at the hands of her abusive husband. However, she goes through with the interview, saying that Pete doesn't deserve to be rewarded for what he did and reveals details about the abuse, angering Pete, who's watching the interview.

The following morning, Rayna goes to see Deacon as she's concerned about him leaving the Opry the way he did. She asks him not to leave her anymore and he comes clean about his cancer. She slaps him before crying. 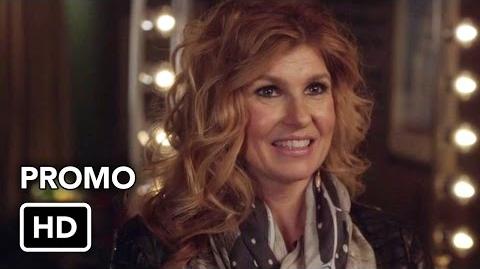