Strong Enough to Bend is the thirteenth episode of the final season of Nashville. It was written by Troy Putney and directed by Dan Lerner.  It aired on July 5, 2018.

Juliette does not react angrily to what she has just walked in on but excuses herself after saying hi as she wants to see Cadence. After a quick introduction, Alannah rushes out of the house but Avery tells her she does not have to go. She says she has to and Avery says that he will call her but Alannah does not think it is a good idea. Juliette goes in to look on Cadence and Avery tells her she can wake her up but Juliette recognizes waking her to apologize is something her mother would have done so she leaves her to sleep. Avery remarks that Juliette looks terrible but the latter says she is too tired to deal with anything at the moment and decides to stay at Hallie's.

Elsewhere, Scarlett is having a bath when Sean's wife calls to tell her that she cannot get Sean to go to his VA meeting. Scarlett sacrifices her bath to drive him to a counselling session at the clinic but after five hours he still has not been seen, so Scarlett approaches a doctor and says that Sean deserves to be seen as he served his country and he is being treated unfairly. The doctor relents but then Scarlett notices that Sean has left the waiting room. She catches up with him outside but he says he cannot be in a hospital with other veterans as it will be like being back in a war zone and tells her that he is not her little project and she only wants to help him to make herself feel better. He finishes off by saying he feels sorry for her because she has nothing better to do with her life. She tells him to seek professional help or she is gone.

Sean soon regrets his words and turns up at Scarlett's door to apologize for how he spoke to her and promises to get help. He has been trying to understand why she picked him and has come to the conclusion that it is because he plays music. He adds that is what she cares about and it is why she would get back onstage, but Scarlett insists that is not going to happen.

In the Jaymes-Claybourne household, Deacon's father is looking at old photographs of his late wife and sharing tales with his granddaughters, when Deacon puts a stop to it by telling Daphne to do her homework, while his father is trying to interfere in his parenting. The following more he is joking around and Maddie and Daphne cannot see how he could have been such an ogre to Deacon. Maddie thinks Deacon should forgive and forget what has happened and then drops the bombshell that she is thinking of going on the European leg of Jonah's tour. Deacon's father, oblivious to his son's vibes for him not to interfere, thinks she should go and see the world. Exasperated, Deacon lets his father have it, telling the latter to keep his parenting advice to himself and tells him to stop pretending the past ever happened, but his father thinks he is remembering it all wrong, that certain things did not happen the way he thinks or they did not happen at all.

On Nashville's Next Country Star, Brad is being hard on Daphne by informing her that she is receiving less and less of the public support since she is hiding her talent by standing behind her guitar rather than properly interacting with the audience. She thinks that performing with her guitar is how she expresses herself best and does not see how dancing around is the right course for her as an artist. Later, while she tries to sing her song without her guitar and is clearly struggling, Ilse demonstrates singing Daphne's song while walking around the stage and being more interactive. Daphne gets angry and accuses her of stealing her song and doing something with it that she never could and storms out of the rehearsal.

At Hallie's, Juliette says she could not have got out of the cult without what they taught her. She cannot believe that something that was so harmful was so helpful all at once. She knows that she has lost Avery for good this time, but luckily her absence does not seem to have affected Cadence, who is delighted when Juliette comes over to play with her. Avery tells her that he will find somewhere else to stay and she asks him if he loves Alannah, but he does not know if he does. He asks Juliette what she expected when she just up and left in the middle of the night. She says she does not have any expectation, that she is just trying to understand. Avery says that he cannot stick around waiting for the next disaster to happen and a calm Juliette says she knows that.

Later Juliette is on the phone as Avery walks in. She is contacting the state department in a bid to help free Rosa from the cult and any others if she can. He is ready to have it out with her but the new, improved Juliette will not fight so he does the yelling. He goes off at her for not coming back and says he is not sure that she will run off again, but Juliette does not want to do that and wants to sue the movement. She says she wants nothing from him but he keeps on talking.

Meanwhile, Alannah is ignoring Avery's calls and he is getting worried. When he finally catches up with her, he says he is moving out but she tells him that she cannot be the one to break up his family. She goes to deal with Brad, who tells her that she needs better songs and needs airtime in a bid to establish her "identity" as an artist. She later tells Avery that Brad made a sleazy comment along the lines of helping his friends and asking her if they were friends. She says she will figure it out by "making him an offer he cannot refuse".

Elsewhere, Deacon and Jessie bump into each other in the supermarket and she reveals that Brad has dropped the custody battle but still wants to send Jake to boarding school. They tell each other that they miss each other and she says that she is grateful for the kindness he showed her and that she had forgotten that men could be decent and good. He reveals that she got him out of a dark place and they part after giving each other a hug and a kiss.

Back at home, Gideon is regaling Maddie with stories about his different jobs over the years when Deacon arrives home with an upset Daphne, who says she should have never taken part in the show. At her next rehearsal, Ilse approaches him and he says that Daphne is just afraid but Ilse thinks she is hiding and will not win if she does not engage with her audience. She also reveals that Daphne skipped her rehearsal that morning, which is a breach of her contract. When Deacon gets home, he finds Daphne and his father talking with the latter saying that she should not be afraid to speak her mind. However, when he mentions the word "he" Deacon misinterprets it as having been talking about him rather than Brad and goes off at his father, which makes Daphne cry and Deacon apologizes before walking out.

Deacon heads to his AA meeting where he confesses that even though people could forgive him for his own aggressive behavior, he is unable to forgive his father for the hurt he caused. He says he does not want to as the people his father hurt are not around to speak up and if he forgives him there is no one around to witness what he did to them and to him as a child. He believes it is his job to remember what they went through and if he does not then his father gets away with it all. Deacon admits that hatred he is feeling for his father has been his armor and and he does not know where he would be without it. However, he knows that he will end up the broken one if he does not find a way to shed it.

Daphne takes to the stage on Nashville's Next Country Star and in spite of telling Ilse that she would perform with her guitar, she ditches it and performs to the rapturous crowd as Deacon and Maddie stand proudly backstage. Elsewhere, Avery moves out of his and Juliette's house and Alannah looks through demos from Brad with a note saying "Let's be friends". Sean plays with his son while Scarlett opens a journal and begins to write again. Following the show, Deacon tells his father he is trying and puts his hand on his back as they walk into the house together. 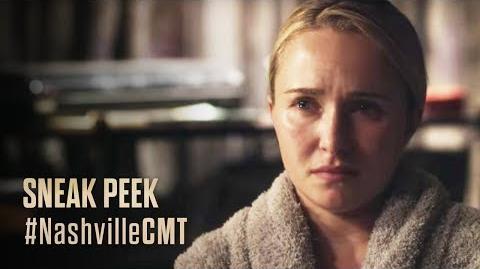