Stand Beside Me is the eighth episode of the fifth season of Nashville. It was written by Matthew M. Ross and directed by Mike Binder. It first aired on February 16, 2017.

As Maddie makes breakfast for Rayna and Deacon, she tells them that the security men are back, prompting Rayna and Deacon to announce that Carl Hockney has posted bail and is on the loose. Maddie does not seem too happy when Rayna says that she needs extra security. That evening, Hockney shows up outside Rayna's house but is standing further away than the 300 feet that his restraining order has allowed. He is gone by the following morning but no-one has been able to sleep and the CMT Awards are just a week away.

Juliette attends a prayer meeting and later tells Hallie of her intention to do a gospel album. She asks Hallie to arrange a meeting with the other members of the choir but they soon bombard Juliette with questions about why she wants to make such an album since she has only been attending church for such a short time. Juliette responds that the music makes her feel good and a member of the congregation points out that gospel music is usually associated with black people and what Juliette has done in the past is questionable, which causes her to snap. However, the following day she apologizes for her behavior, explaining her reasons for wanting to do the album and the choir agrees to work with her.

Meanwhile, Damien meets Scarlett for lunch to talk about the connection he feels with her. After confessing her feelings to Deacon, she decides to break up with Gunnar, telling him that she needs to be by herself to figure out what she wants from her life. However, she ends up going to Damien's hotel and sleeping with him.

While Avery records a song but Juliette is not a fan of it and tells him that he needs to get past his angry kid phase. At school, Daphne gets her first period and contacts Maddie for help, but the latter sends Rayna in her place. Deacon later suggests throwing a "period party" to help her feel better.

Elsewhere, Maddie attends a gig that Clay is performing at accompanied by security. Rayna shows up and is impressed with what she hears and afterwards tells Clay to call to the Highway 65 offices to talk some more about his future, so long as he takes good care of Maddie. Afterwards, she returns to work where the security does a clean sweep of the place before leaving. However, Carl Hockney shows up, telling Rayna that he had been hiding in a broom cupboard. She tries to escape but she notices the knife in his hand and he tells her not to be scared as it is not sharp.

Rayna tries to keep him calm by talking to him about his life. He says his name is Wayne and he goes by his middle name and that both of his parents were abusive. She tells him that everyone has to find a way to go on and the evil cannot win. While she says this, she sneakily dials the Nashville P.D. who contacts her security. They burst into the building and realizing he has been set up, Hockney attempts to use Rayna as a human shield, holding the knife to her throat, but he is soon taken into custody. The security people prepare to take her home and she contacts Deacon to tell him what has happened. However, at that moment a car coming from the opposite direction smashes into them, causing Rayna's phone line to cut off. 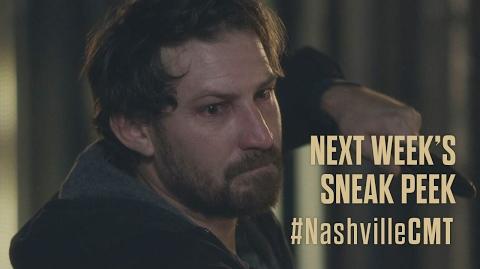