Speed Trap Town is the twentieth episode of the fifth season of Nashville. It was written by Jessie Zwick and directed by Jet Wilkinson. It aired on July 27, 2017.

Maddie is awoken by an excited Deacon and Daphne who tell her that she has been nominated for an American Music Award in the Best Pop/Rock category but Maddie is less enthused when she is told that Juliette is up for the same award. The latter is less than pleased since she knows she stole her song from Maddie and that the latter hates her. When Avery phones to congratulate her, he can feel that something is up but she brushes it off. Glenn advises her to reach out to Maddie to try and ease the situation but Juliette thinks it will all blow over since she has known Maddie for years. Juliette ends up sending Maddie a congratulatory Tweet which the latter later responds to with the words "Thanks. I wrote it myself".

Elsewhere, Deacon phones Jessie who sings him a song she wrote. They meet for a coffee and she says she was supposed to have her son for the weekend but Brad rescinded the offer, which gives her some free time. They later decide to meet up at the recording studio to record it but are delayed by another band using the booth. Jessie apologizes for delaying him and sends him away, ultimately leaving herself without doing any recording. When she gets home, Brad is there looking for their son, who she says is spending the night at a friend's house. Brad tells her she is in violation of the court order and orders her to get him to come home. She ends up throwing him out but is rattled by the whole situation. She and Deacon return to the studio but she is not feeling what she is singing and Deacon tells her that she is the only thing getting in her way, but Jessie does not see it that way.

Meanwhile, Gunnar joins Avery but gets off in Aurora, Texas to pay a visit to his elderly grandmother. While at the gas station, he meets an old school friend called Kelly Walker, who is about to leave town herself but suggests they meet up to reminisce about the good times. He pays his grandmother a visit but it is clear she is not pleased to see him, which he tells Scarlett about when they chat later. Kelly picks him up from his motel and they go back to their old school. After downing some beer, she suggests breaking in and while she has to use the restroom, Gunnar sees his old classroom and a flashback shows the day he and Jason learned that their parents died and their grandmother took custody of them. The following day, he pays a visit to his childhood home, which is now owned by a Hispanic family. The daughter, who speaks English, shows him to his old room that he shared with Jason. Another flashback shows the brothers as kids jamming on their guitars until their grandmother tells them to knock off the racket. Jason sneaks out the window, leaving Gunnar alone with their grandmother.

Back in Nashville, Scarlett become nervous when she hears noises outside her house and, which turns out to be a raccoon, and decides to spend the night with Deacon and the girls. Maddie suggests that she take self-defense classes. When she initially goes she is too reluctant to get involved since she has never hurt anyone. It is only after a chat with Deacon and admitting that she misses Gunnar more than she thought that she decides to give the class another go and lashes out at the instructor, seemingly pleased with herself.

Back in Aurora, Gunnar tries to blow off a date with Kelly, but they talk about their youth with her kissing him before she admits that he married a meathead they both knew in school. She says she has her own problems and is not the solution to his. The following day, as Jessie heads back into the studio, Deacon apologizes for his behaviour and gives her the boost needed to record her song. Before heading back to Nashville, Gunnar goes back to see his grandmother to lay into her about how she put him down as a kid and tells her he is going to play her one of his songs whether she wants to hear it or not. As he sings, a montage shows Maddie and the other nominees at a press conference as Juliette joins them, exchanging a look with Maddie, who ignores her, while Scarlett dances around her kitchen while cooking. As the song concludes, Gunnar is seen driving home from Aurora with a smile on his face. 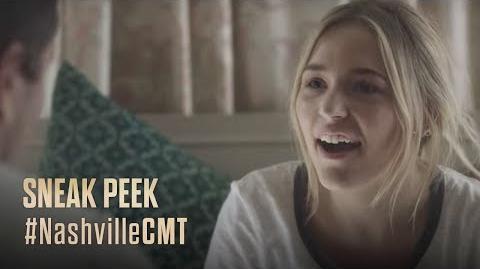