Sometimes You Just Can't Win is the eighth episode of the final season of Nashville.  It was written by Scott Saccoccio and directed by Michael Lohmann. It aired on February 22, 2018.

As Deacon and Jessie snuggle in bed, Scarlett and Sean are busy at the ranch moving bales of hay and chatting about music. She invites him to Deacon's gig at the Bluebird that evening but pushes a little too hard, which causes him to walk away. Dale reveals to her that he has agoraphobia and being in such a place would be traumatising for him.

However, he has a change of heart and shows up at Scarlett's house the following day with her blanket, which he used when she brought him home, and tells her he would like to go to the gig, only to learn it was the previous night. They go to a writing room at the Bluebird instead but he starts to feel uncomfortable and leaves. She follows him outside and tells him she cannot know what he has been through but she knows what it is like to feel that the world is closing in on her. He just wants to be a normal person and she tells him that even though people look okay, it does not mean that they are. Her words appear to have an effect on him as the following day he invites her to listen to a song he wrote. Afterwards, she tells him that he has to get his songs out to a wider audience but he is not so sure.

Meanwhile, Deacon comes across Daphne putting an EP together and tells her she is too young. He tells her to take the time to figure out who she wants to be as an artist and not let others decide for her. When he leaves, she looks at a website advertising 'Nashville's Next Star' and prints out an application form. She attends the audition alone and performs for a judge named Ilse as Brad Maitland and a producer look on, with the former remarking that Daphne is Rayna Jaymes' daughter. Elsewhere, Brad is also making his own son's life a nightmare as the latter eventually reveals to Jessie that his father is planning on sending him to boarding school. Jessie barges into Brad's office and tells him she despises him.

That evening, Deacon tells Maddie and Daphne about the situation with Jake and Daphne comes clean about auditioning for 'Nashville's Next Star', which happens to be run by Brad Maitland. Deacon tells her that she does not need that show to nurture her talent but she just storms off. He later has a heart-to-heart with her in which he states that he does not want Brad exploiting her because of who she is and she tells him that auditioning was the first time she felt happy since her mother died. Deacon relents and the following day Daphne is one of three artists who successfully makes it through to the next round.

Avery returns from Bolivia without Juliette and later removes his wedding ring, feeling completely dejected. He tells Deacon that he cannot spend the rest of his life waiting for the next emergency and that he is just done with everything, even though he is not entirely sure what that means. Alannah later has a heart-to-heart with him about relationships, stating that they are hard work. At band practice, Will is still bitter that she is hogging the limelight and is not happy when Bucky tells them the producers of TV show 'The Chew' want them to perform two songs where Alannah sings lead vocals. She asks Bucky if it is possible that she sings one song and Will sings another.

The Last Highways show up at the studios in New York and Will is super pumped to get out onstage to perform. However, everyone else is nervous when he takes over the performance, knocking over the mic stand and rocking out until he collapses. EMTs rush to his aid only to find no trace of a heartbeat, which leaves the other band members in shock. Back at Jessie's house, Jake is still refusing to talk to her and will not come out of his room. Brad arrives to pick up his son and bangs on his door, forcing his way in to confront his son. Deacon manages to pull Brad away, but all the latter does is smile and asks Deacon if he just assaulted him. Brad then leaves as Jessie looks on in shock over what has just happened. 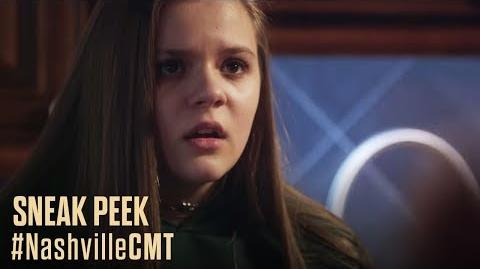