Somebody Pick Up My Pieces

Somebody Pick Up My Pieces is the fourteenth episode of the third season of Nashville. It was written by Dana Greenblatt and directed by Stephen Cragg. It first aired on February 25, 2015.

In the aftermath of Jeff's firing, Edgehill is dissolved, meaning that Luke, Will and Layla don't have record deals anymore. Jeff deals with this by spending time at Layla's house before chatting to Will with the suggestion of establishing their own label, which Luke thinks is a great idea. However, he disagrees about signing Layla, which leads to Jeff dumping her. He tells her to go to Rayna and beg her to sign her to Highway 65.

Rayna is pleased about Jeff's firing and tasks Bucky with finding new artists to sign but doesn't like anyone he brings in. Layla waits around for hours to meet with Rayna, having heard her music, wants to sign her but Bucky isn't too thrilled about having another artist with baggage. Rayna says she wants artists who have something to say and tells him that when Edgehill began it was all about the artist but is now about the bottom line.

Sadie tells Rayna about her troubles with Pete and Rayna has the company's liability insurance deal with it. The lawyer says $500,000 and at the meeting, Pete says he has finally got what he deserves. Rayna tells him she doesn't know what his problem is but warns him that if he ever bothers Sadie again she will make it her mission to ruin him. A relieved Sadie starts working on her music again and celebrates by purchasing donuts.

Deacon receives the news that he might be able to get a new drug trial. Scarlett is thrilled but it means that Deacon would have to give up the hope of a transplant if he goes for the trial. He opts for the transplant and Caleb tells Scarlett not to let her uncle's illness consume her life and she decides to spend some time with Avery and Gunnar. She later asks Caleb out on a date.

Meanwhile, Juliette is going crazy as a magazine stated that she gained 75 pounds and wants to cancel her Vogue photo shoot. She eventually goes through with the photo shoot, but gets mad and throws the photographer out. Then she changes her mind and when she gets the photos, Avery likes what he sees.

Will wants to get in the recording studio but since the label has folded that's no longer possible. Several labels line up to chat with him but he's worried they'll find out he's gay and be angry. He asks Deacon for advice and Deacon tells him that he likes to stick with the devil he knows. Jeff knows about Will, so Will says he'll sign with him and Luke. However, Luke tells Jeff that no one in Nashville will take them seriously because of Jeff's misdemeanors and fires him. Jeff goes to see Layla who tells him he can be her manager.

Teddy meets Jeff at a bar and Jeff warns him to keep quiet about his dalliance with Natasha. Teddy then goes to see Natasha and tells that they need a cover story and that he will hold a press conference. 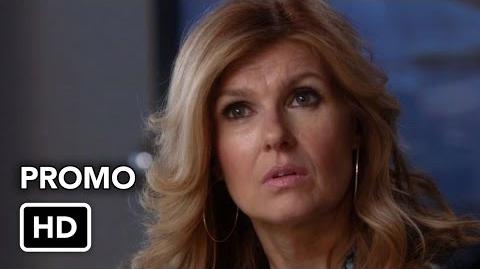 Nashville 3x14 Promo "Somebody Pick Up My Pieces" (HD)