Road Happy is the fifth episode of the third season of Nashville. It was written by Dana Greenblatt and directed by Arlene Sandford. It first aired on October 22, 2014.

While Avery is doing community service on a roadside, Juliette is discussing with Emily how to break the news to him. She decides to send him a text message with the words "I'm pregnant. It's yours", before an officer confiscates his phone.

Meanwhile, Rayna receives a call from Daphne, who says she is missing her. Rayna decides to organize a fun day out with her daughters, Luke and his son Colt. However, Daphne is disappointed when Rayna and Luke spend their time filming commercials and conducting interviews. Rayna makes it up to both her daughters by taking them bowling and attempts to bond with Maddie, who has found an unflattering photo of her in a tabloid magazine. Teddy decides to let Daphne get her ears pierced and Maddie get highlights, which displeases Rayna.

Gunnar finds out that Kiley is moving out of town for Oklahoma and asks Zoey if it would be okay if he has a little going away do with Kiley. When he goes to see Kiley at her workplace, he discovers that she has a son, Micah, and the two bond over their love of food. Gunnar asks Kiley if Micah is his son and at first she lies and tell him that he isn't before she comes clean and says that he is.

Elsewhere, Zoey is having a hard time as Juliette's back up singer but she overhears Juliette talking about her baby bump and later comforts her when she has a clothing meltdown. They end up bonding,

Scarlett is busy working on her songwriting but gets distracted by a homeless man shouting outside. She goes outside to give him a sandwich and he offers to help her finish her song.

Jeff visits Will in a bid to get his trainer to sign a non-disclosure agreement about their relationship. When Will asks the guy he gets angry and asks Will what he wants and Will admits that all he needs are secret hook ups. The trainer storms out of the dressing room and Deacon witnesses the scene. WIll goes out for a walk and is attacked by two men who rob him. Deacon notices his injuries and attempts to talk to him, but Will rejects him but thanks him for his support.

Layla flirts with her music producer and complains to Jeff about the quality of her songs, which she got out of blackmail. She decides to calm herself by consuming pills and smashing the bathroom mirror.

In the aftermath of Juliette's revelation, Avery shows up on the set of the Patsy Cline biopic and demands to see her so that she can explain herself until Glenn gets him to calm down and tells him to leave Juliette alone for a while. When the time comes to film a sex scene, Noah West tells Juliette that he won't tell anyone about her secret. He later shows up at her concert to show his support. However, Juliette starts to feel unwell and ends up collapsing, leaving Zoey to finish performing the song as Juliette is brought to hospital. 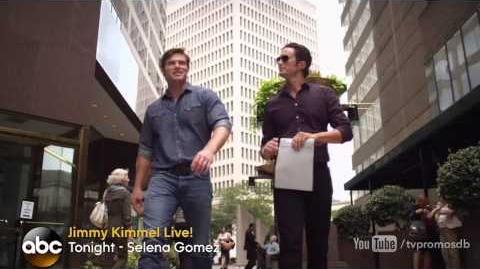