Reasons to Quit is the season finale of the fifth season of Nashville. It was written by Scott Saccoccio and directed by Callie Khouri. It aired on August 10, 2017.

Deacon meets with Brad Maitland at the latter's offices. The latter is interested in buying Highway 65 but only if Zach is kicked out. Deacon is not interested in selling and tells Brad what he can do with his offer. As Deacon leaves, he bumps into Jessie, who is dropping her son, Jake, off to his father. Deacon acknowledges how tough the situation must be for her. After parting ways, he receives a phone call from a Highway 65 worker, who says the power to the offices has been cut and their account has been cleared out by none other than Zach.

Deacon arrives at Highway 65 and is told that they can move their equipment so they set up shop in the Tracks recording studio, where they are joined by Maddie, Daphne and Scarlett and Will, who tells them he has been unable to contact Zach. Kacey Musgraves soon arrives for a jamming session and Jessie joins them with fast food. Maddie and Daphne go outside and the latter asks for an opinion on Jessie but Maddie does not know what will happen between her and Deacon.

Deacon soon emerges since Gunnar, who has returned to town and has not told Scarlett, has managed to find Zach. Deacon pays him a visit at his apartment and Zach warns him not get on his wrong side and that everyone will soon come to him begging for air. All Deacon can say is that he never realized how small Zach was.

Meanwhile, Juliette's air conditioning unit is broken and she has a repairman in while on the phone to Avery. She lets him know how miserable she is while Polly continues to flirt with him at the other end. The real reason for Juliette's stress is that she has to attend the American Music Awards pre-party where she knows she will encounter Maddie. When she arrives, Deacon and the girls are already there and she acknowledges Maddie with a wave, but the latter walks off, leading to Deacon asking Daphne what is going on. She says that Maddie and Juliette are not talking and when "Water Rising" starts playing, she tells him that Juliette took the song that originally supposed to be for Maddie. Juliette darts for the elevators only for Deacon to catch up with her. He is angry with her betrayal, telling her that they have known each other for years and are like family. With tears in her eyes, she asks how she can rectify things and he tells her that if Highway 65 survives, she is off the label.

Zach meets with Brad, who is still determined to get his hands on Highway 65. The latter informs him that Deacon has made a base at Tracks recording studio, trying to portray himself as a sympathetic figure. In response, Zach says that when he sets up a business, he delves in deep and learns everything, which is how he knows Brad is an impulsive, egotistical narcissist who masquerades as a nice guy. Brad responds with an offer to launch a multi-platform media company, which would potentially exploit every artist's brand. Zach and Alyssa seem intrigued with the idea.

Back at Tracks studio, everyone is having a great time together singing when Gunnar arrives. He asks Scarlett if they can take a walk since he needs to talk. He tells her that he is done trying to convince himself that he is good enough for her and does not need her to make him happy any more. Later, he says that he was originally afraid of being alone but since his trip home, where he met an old friend, he is looking at things differently. A clearly annoyed Scarlett says he should do his own soul searching some day. Before they take to the stage at an anniversary show at the Bluebird, he accuses her of never trusting anyone and letting them into her life and picking apart the faults of those who love her. They take to the stage and start to sing but she breaks down when he changes the lyrics to reflect their present situation.

As Deacon is heading into the Bluebird, he encounters Alyssa, who's smoking a cigarette. She tells him he can still make amends and that he is living in a fantasy world, not sure of what is good enough for him. Then she laughs and kisses him, which he abruptly pulls away from. She tells him he looked like he needed it and she thinks she is able to see the pain in other people.

Elsewhere, Daphne goes to an end-of-summer pool party but is reluctant to talk to Flynn, in spite of Louisa egging her on. They see that Jake Maitland is also in attendance and Daphne later approaches him while he is on his own. He is uninterested in joining in the festivities and they talk about how they are dreading eighth grade before Jessie picks them up as a favor to Deacon. Later when she is unable to find her phone, she asks Deacon if he is interested in Jessie and he reassures her that she and Maddie are the most important people in his life.

When Avery phones Juliette, she has been crying on the couch but does not reveal why. He tells her about what Zach and Brad are planning and she says she will call him back as the lightbulb goes on in her head when she looks at her iPad and sees Mackenzie Rhodes' name. She enlists the journalist's help in contacting Zach for the scoop on an article that she plans to write about how a billionaire fanboy is trying to ruin Rayna Jaymes' legacy and also lists various sources who attest to how terrible and insufficient a boss he is. Zach is truly flummoxed and hangs up. She tells Juliette that she is not going to print any of the conversation but in return Juliette says she will give her the scoop on another story that will be of interest her.

As Avery lies in his motel room, Polly calls to his door with some food to apologize for her behavior. They are interrupted by a report from Entertainment Tonight, which announces that Juliette has withdrawn her award nomination as she admitted to stealing the song meant for Maddie, which Avery had no idea about. He is immediately on the phone to her but is unable to get through. He decides the best thing to do is to head home but Polly tells him that all flights have been canceled due to the bad weather so he opts to drive home.

Meanwhile, Deacon finds Zach in the Highway 65 boardroom crying his eyes out. The latter makes some idle threats to sue Deacon since no one has ever treated him this way, but then says he feels sorry for Rayna because Deacon was all that she had to depend on. Remaining calm, Deacon asks if all of this was a smoke screen and if not then why is he still there. Zach reiterates that he does not like to lose and Deacon comes to the realization that Zach is the loneliest person he has ever met. He was happy to be there since he felt like part of a family and does not want that to end. Deacon tells him it does not have to end and tells him to forget about the money, offering him the chance to become a partner in the label. Zach thinks it is a crazy idea but accepts nonetheless. As he leaves, Jessie returns Daphne's phone and hugs Deacon, telling him everything will be fine.

He and the girls then head out to L.A. for the American Music Awards, which Juliette watches from home. As Maddie takes to the stage to sing, a montage shows Zach in the boardroom crying while Scarlett prepares to leave Gunnar's house but he signals to her to keep the key. She also pays Juliette a visit and the latter admits that she realizes how horrible she has been but does not how to rectify the problem. Avery drives home through the pouring rain and manages to get back to Juliette unscathed. After Maddie finishes performing, it is time for the category she is nominated in but she ends up losing to Katy Perry.

The following day, as Deacon and the girls drive home from the awards, he asks Maddie how she is feeling and she replies that she feels free. 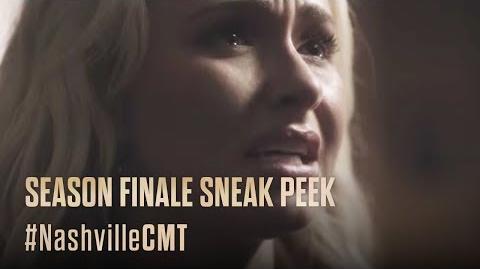