Nashville Wiki
Register
Don't have an account?
Sign In
Advertisement
in: Episodes, Season 2 Episodes, Episodes Airing in May,
and 2 more

On the Other Hand

On the Other Hand is the season finale of the second season of Nashville. It was written and directed by Callie Khouri. It first aired on May 14, 2014.

Before Rayna heads out to New York to do her album promo on "Good Morning America", Bucky informs that she has been bumped for Will who is also releasing an album the same day as her thanks to Jeff. Desperately needing her album and label to be successful, Teddy is able to book LP Field for her to do a show.

Maddie gives both Deacon and Rayna a framed photo of their performance for the troops. Deacon returns the favor by giving Maddie a guitar, which Rayna picks up at his house, She also wanted to know how to screw Jeff over and Deacon tells her to do what she needed to do. Juliette comes to Rayna asking out of her contract saying it was a mistake signing with her but Rayna tells her no and that she will performing at the show at LP Field too. Maddie also wants her mom to sign her, while Deacon puts on a show for the Sober House.

After being refused permission to be let go from Highway 65 and being bombarded with voicemails from Jeff, Juliette ends up getting drunk and shows up at the Sober House show but Deacon prevents her from going onstage and tells her to go home. Rayna follows her home and holds her hair back as she vomits. They discuss how best to tell Avery about her one night stand with Jeff, Rayna says she has to tell him before Jeff does. She then agrees to perform at Rayna's album launch. However, after Juliette was removed from the Sober House show, Zoey and Gunnar are the ones to tell Avery about Jeff and Juliette after Avery senses something going on with them. He goes to break up with her and Juliette pleads him to not to.

Stressed out about the release of his album, which has gone horribly thanks to Rayna, Will decides it's time to come clean to Layla and he pulls her into their bedroom where he thinks there are no cameras watching and finally admits that he's gay, leaving Layla speechless. However, a red light is seen flashing on the clock on the wall. Scarlett is preparing to leave Nashville and calls to see Avery, only to find him drunk. She tells him that Juliette is a good person.

At LP Field, Rayna's album launch is about to get underway. Before the gig, Jeff comes face to face with both Rayna and Juliette who tell him exactly what they think of him and his label, with Juliette even thanking him for the worst minute and a half of her life. After Rayna and Juliette perform together, Luke takes to the stage to sing with his girlfriend. When the song finishes, he asks her to marry him and she accepts as Maddie and Deacon look on in shock.

Scarlett says goodbye to Gunnar before leaving town but he tells her not to. Deacon goes to see Rayna and tells her that it needs to be him and her, together, because he knows how to love her now. He then gives her a ring and kisses her before leaving. 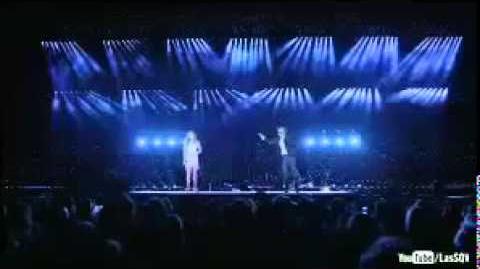 Nashville 2x22 Promo "On the Other Hand" (Season Finale)