Not Ready to Make Nice

Not Ready to Make Nice is the sixteenth episode of the fifth season of Nashville. It was written by Troy Putney and directed by Allan Arkush. It aired on June 29, 2017.

As Gunnar and Scarlett arrive at a gas station for a fill up, an "Access Hollywood" host breaks the news that they have been seen out and about, with the latter sporting a baby bump, leading to speculation that Gunnar is the father. Meanwhile, at Avery's studio, he, Hallie and her band are having a jamming session when Juliette shows up for the demo, reminding her that she has a meeting with Deacon and needs the demo. Hallie shoves it into her hand and barges out of the room, followed by Avery. She reveals to Avery that George split up from her and went back to his wife. Avery says he will have a talk with Juliette.

Juliette plays the demo for Deacon, who firmly believes that it is the wrong way to go as he envisioned Hallie as more of a roots artist and looks to Avery to back him up. When Avery agrees that it is the wrong song, Juliette storms out of the room. As Scarlett and Gunnar shop in a clothing store, they are accosted by fans who have heard of the pregnancy and want photos. They later find photos of themselves online uploaded by crazed shippers and are confused with all the attention. Having being assigned to Bucky's guidance as her manager, Maddie returns home to show Daphne the graphics for her EP, only to find hundreds of nasty GIFs. Liv says they were only having fun but Maddie, in spite of Daphne's pleas, tells Liv to get out of the house. When Deacon returns home, Maddie tells him that Daphne was the one responsible for the memes, which leads Deacon to confiscate her phone for a month.

The following day when Scarlett goes for lunch with a journalist, under the impression that she wants to talk about The Exes, the journalist starts to talk about Scarlett's relationship with Damien, saying that she also had an affair with him, and works out that he is the father of her baby. Scarlett storms out of the interview after telling her it is none of her business, but Gunnar is not too happy when he calls to see Scarlett later and shows her a tabloid report that mentions that Scarlett and Damien had an affair. When Deacon goes to see her she reveals that she is having a baby girl and a delighted Deacon tells her that she will be a great mother.

Back at the Jaymes house, Daphne and Maddie are refusing to talk to each other and the former is none too happy that Maddie can still use her phone to take phone calls for interviews. Daphne misses a call from Flynn and storms off when Deacon apologizes. When she returns from school later she thinks of grabbing the phone only to find a message from Deacon telling her not to think about it. Following a series of radio interviews, Maddie returns to her car, only to break down crying.

As Juliette washes up she and Avery argue over Hallie's sound, but Juliette eventually relents and allows Avery to continue working with her. However, when she joins them in the studio later when Avery wants to show Hallie his production on her song, Juliette gets jealous at their closeness, leading to Hallie telling her to get a grip on herself. He eventually returns home and he and Juliette argue about Hallie, with Juliette obviously feeling a wave of jealousy over their closeness but Avery assures her that everything is fine.

After Deacon heads out, Maddie goes to Daphne's room to talk and admits that she has been finding it hard to cope since Rayna died and does not want to lose Daphne, apologizing to her for going off at her. They hug each other and decide to visit Liv at the homeless shelter. They try to encourage her to come home with them but Liv refuses to go since all of her friends are there. When Deacon returns home, he wants to talk to the girls and suddenly Maddie's phone rings. It is Flynn and she hands the phone to Daphne, who takes over. She tells Deacon that they made up and that she agreed to let Daphne use her phone for the month. They later laugh over their dinner and the two sisters record a song together in Rayna's studio, with Deacon looking on proudly outside the door. Elsewhere, Gunnar continues to look at the shipper images of him and Scarlett while Juliette is seen alone at home, crying her eyes out. 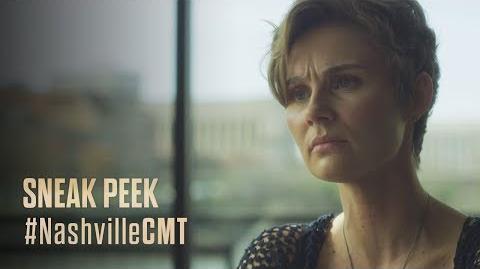