Nobody Said It Was Going to Be Easy

Nobody Said It Was Going to Be Easy is the sixth episode of the third season of Nashville . It was written by Taylor Hamra and directed by Thomas Carter. It first aired on October 29, 2014.

As Juliette is rushed to hospital, Zoey phones Avery to let him know what has happened. He goes to see her but when Noah West arrives to make sure she's okay Avery isn't happy. The doctor tells her that the baby is fine but that she has a blood clot and even though she can finish shooting the film she must stop touring immediately. Noah tells her that she doesn't have to go through everything alone but she says she needs to figure out what it meant that Avery showed up to see her.

Elsewhere, the nominations for the CMAs are announced with Rayna watching as they come in with Sadie while Luke is watching with his team. Altogether the couple has eleven nominations (Rayna has six and Luke has five) while both Sadie and Will are nominated in the new artist category. The media says the reason why Rayna and Luke are nominated for everything is because they're a couple and destined to prove that she can do her own thing, Rayna asks for a guest slot on "Dancing with the Stars" but the producer tells her they will only include her if she and Luke perform together. However, Rayna says that if she does it alone she will release a bonus track which the producer agrees to.

Juliette insists about not informing the press about her hospital visit. She goes to talk to Avery and runs into Zoey, firing her for taking over from her when she collapsed onstage. She tells Avery that he has to make a choice about being involved in the baby's life in some capacity and when he goes to see her he tells her he forgives her but can't be with someone he doesn't trust. However, he will always be the baby's father and wants to be involved.

Meanwhile, after discovering that Micah is his son, Gunnar finds out that Kiley is planning to move to Tulsa and attempts to stop her from leaving. He also tells Scarlett about Micah and as he's hugging Kiley Zoey walks in on the two of them. Teddy and Jeff are becoming friends and they dine together at Jeff's house with two ladies while Maddie and Daphne have dinner with Luke's son, Colt. The teenagers end up at a party while Teddy goes for a swim in the pool with one of the women. When they later leave, Jeff reveals that they're call girls. Teddy is annoyed but ends up phoning one of them, Natasha, the following day.

As things get out of hand at the party, Daphne phones Teddy to come home and he calls Rayna who calls Luke. He tells Deacon about Maddie's continuing bad behavior and Deacon says he wants to return home to deal with it. Deacon and Luke return home together and confront Teddy who is mad at Rayna for being absent for so long. Maddie knows she messed up and the debate is settled when it is revealed that the girls need a nanny.

Scarlett reaches out to Terry, inviting him back to Deacon's house for food and a shower. She finds a photograph of his family in his pants and when she questions him about it, he gets angy and storms off. The following day, he's not in his usual spot where they first met.

Will is still recovering from his attack and Layla has injured her hand after smashing a mirror and has taken to the bottle. They have to get through filming their reality show and Layla says drama makes for good TV. While at a party, she gets drunk and mad because of Will's success and the fact that he's gay. He pulls her aside and she tells him not to touch her, but he insists that he does care about her. However, she continues to drink. Deacon and Luke are at the same party and Luke isn't too happy when Deacon takes to the stage to perform a song.

As the media gathers, Juliette makes an announcement that Avery is the father of her baby and that she will be completing filming on her movie. 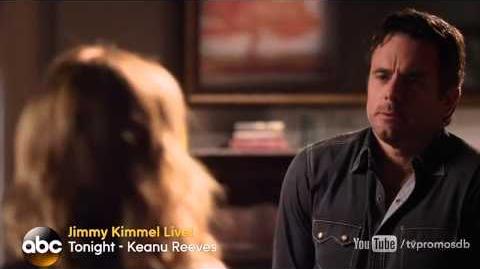