Nobody Knows But Me

Nobody Knows But Me is the eighteenth episode of the third season of Nashville. It was written by David Gould & Monica Macer and directed by Callie Khouri. It first aired on April 15, 2015.

Juliette has her hands full with her newborn daughter, Cadence. She attempts to calm the child down but it's only when she gives her to Avery that the child finally settles. Juliette tells the Patsy Cline crew that she will have a new song for them in 24 hours and calls Deacon to help. However, their writing session is a disaster and Juliette's screaming wakes Cadence and Deacon tells her to look after her daughter.

Rayna says that Deacon should move in with her and the girls but Maddie is continuing her bratty behavior. Elsewhere, Layla wants to be the opening act for Jade St. John but Jeff isn't so pleased about that since Jade used to be his ex-fiancée. Jade is in town and meets Jeff, telling him that she'll listen to Layla's songs if he sets up a meeting with her idol Luke Wheeler. Jade then says that Layla can be her support act.

Rayna isn't so pleased about Jeff being Layla's manager and they come to blows backstage at Layla's show. She says that Jeff may have got Layla in the door but he's a washed up bottom-feeder and that managers get fired every day. Rayna suggests to Maddie that they go to Jade's show together, but Maddie says no. When she drops off Daphne's bag at school, she sees Maddie and Colt kissing. She contacts Luke who says Maddie has been visiting the ranch and she and Colt are an item. They're also going to Jade's concert together. Rayna and Maddie have an argument and Rayna forbids Maddie from going to the concert with Colt.

Deacon tells Maddie that he gets that she has a boyfriend but doesn't understand why she's lying. Maddie says she finds it easier being at Luke's since Deacon's cancer makes her sad, meaning she told Colt. She says that Deacon is embarrassed by having cancer and he says he doesn't want people to be sorry for him. She says she's sorry for sneaking around and lying and phones Rayna to apologize. Deacon also apologizes to her for his behavior and she says he can share it any way he pleases.

Luke gives Maddie and Colt tickets to Jade's show. Luke and Rayna have a civil chat before Deacon arrives. Deacon tells Luke he has cancer and Maddie is having a hard time about it. Shocked, Luke tells him that Maddie can come to the ranch at any time and shaking his hand, tells him that he has a lot to live for. The following morning, Maddie and Daphne suggest that Deacon should move in with them and Rayna.

Scarlett is still dating Caleb who wonders if he should be worried about Gunnar. In a Pitchfork interview, Avery feels left out since the reporter wants to focus on Gunnar and Scarlett's relationship. Neither Scarlett nor Avery is happy about that. Gunnar suggests that Will should ask Kevin to come to the Triple X's show and Will awkwardly asks him to come.

Avery doesn't want Juliette to come to the show since the reporter will focus on her but she doesn't take the news well, thinking she's only a blob and an unemployed milking machine. Kevin shows up at the show and Will runs off. Later, Will tells him he didn't want their time to come to an end and asks him out. Kevin says he didn't know Will was interested in him and reciprocates his feelings by kissing him. Avery returns home to discover that Juliette has hired a nanny. Juliette is more interested in focusing on her song. The following morning, he finds the nanny there and Juliette gone. She has boarded a plane to L.A. and has everything worked out except for telling her husband what's happening. He takes the baby to band practice and says he has to quit for her sake.

Jade St. John takes to the stage in front of a packed arena. Teddy shows up at a motel with the $500,000 for Natasha and she tells him he's a good man. When he leaves, she is revealed to be wearing a wire and has given Teddy up to the FBI in exchange for immunity. 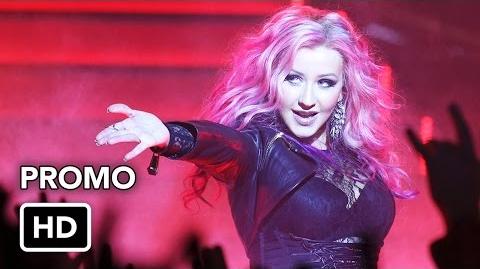