Start a Wiki
No Place That Far is the eleventh episode of the final season of Nashville. It was written by Savannah Dooley and directed by Dawn Wilkinson.  It aired on June 21, 2018.

At the Church of Coherent Philosophy compound in Bolivia, Juliette storms up to management to complain about the way the place is being run, highlighting a woman who had been put on extra duty and had collapsed due to her workload since she had been denied any breaks. Juliette takes the matter to Darius, telling him that she can no longer stay there after what she has seen but he says she cannot give up on her journey and he needs her there. She agrees to stay there for the time being but then she is going home.

Later, she is in her room packing when two people named Bill and Sharon come by to talk to her about her allegations, telling her that the volunteer's account of events differed to hers. They want to know why Juliette made such false allegations against the movement but Juliette sees through their manipulation and tells them that their words will not work on her. Angered, she tries to leave for her flight but to show that they are not joking they bring in a guard and lock her in her room until she calms down.

The following day, Bill and Sharon want to have a real conversation with Juliette now that she has calmed down. They have also installed a woman named Rosa to watch Juliette at all times, also informing Juliette that they are well within their rights to keep her detained until she understands what makes her behave like this. Understandably, she is furious.

Two days later, Juliette is still being detained and she tries to get Rosa to help her. The latter lets it slip that the management does not really believe that Juliette is emotionally unstable, she is a troublemaker. That night, Rosa is alerted to the sound of Juliette vomiting and the latter says this is a sign that she is pregnant. She tells Rosa that she needs to see a doctor but Rosa tells her to keep quiet until she gets back. When she returns, she hears Juliette singing to her unborn child, which makes her soften a little. She gives Juliette a pregnancy test, which turns out to be positive. Juliette tries to get Rosa to help her and asks he to imagine if it was her child the cult was keeping locked up but Rosa does not need to imagine it as they have imprisoned her son. She tells Juliette to submit to the cult, which Juliette reluctantly agees to.

The following day, Juliette meets with Bill and Sharon and tells them the allegations were just a reaction to seeing someone else in pain. They bring up her own abuse, convincing her that she made up the allegations because she was reminded of her own pain. She agrees with everything they have said in fake submission, wiping away her tears. As she walks away, a smile emerges on her face.

Meanwhile in Nashville, Gunnar and Avery are still not on speaking terms and Will is acting as the go-between. He talks to both of them separately and basically lies about how sorry the other is. Fortunately, it works and they are soon back on speaking terms, catching up with each other over drinks with Gunnar saying he may overreacted and just wants Avery to be happy. However, he does not want to hear all the details about his feelings for Alannah. Elsewhere, Alannah goes to see Brad again, having considered his deal offer. She has already told Avery that she does not want it to affect the band but Avery tells her to go for it and that it will not affect their relationship. Jessie has also told her to be wary of Brad but Alannah signs with his label regardless.

She and Brad go for drinks and she ends up getting tipsy. She phones Avery to tell him the good news and babbles on about ruining the good things in her life. Aware of her behavior, she hangs up and Avery calls to her house to see if she is okay, only to find her in a bad state. She is spiralling and feels weird about spilling her feelings for him. Avery cannot understand why she should feel this way and says his life is a mess too and that they can be messes together.

Maddie invites Twig over to her house to perform a song she has written. He loves it but his heart drops a little when she says that she has written it for Jonah and wants him to love it. Unfortunately, Jonah is still carrying on with his ex-girlfriend Mia which leaves Twig in the position of having to lie to Maddie. Later, she calls to Jonah's house for a date with him but he is not there. However, Twig is and while they have pizza, he plays a mix of the song she sang for him and she loves it. Jonah arrives with the excuse that he was busy in the recording studio and Maddie forgives him. The following day, Twig shows up at Maddie's place and tells her she deserves to be with someone who cares about her, which makes her think that Jonah does not care about her. Twig changes tactics and tries to kiss her, causing Maddie to tell him that she loves Jonah. Embarrassed, Twig leaves but they later make up, with him saying that her friendship with him will be enough.

Back in Bolivia, Juliette ropes Rosa in to helping her escape, which involves the latter flirting with the guard so that he gives her the keys needed so that Juliette can retrieve her passport. Getting the keys, she gets into the office but unfortunately the filing cabinet is padlocked. Juliette manages to open it using a rock and grabs her file and passport. They get back to her room and after saying their goodbyes with Juliette promising she will return to save Rosa and her son, she jumps out of her window and makes a run for it. She does not get far before a car pulls up behind her but fortunately it is just a local. She asks him to drive her to the airport. 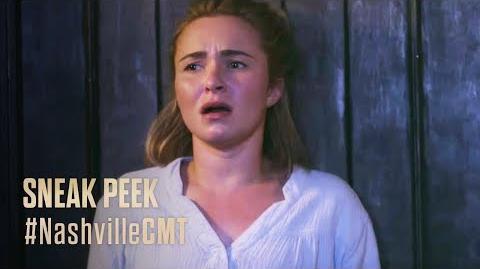 Retrieved from "https://nashville.fandom.com/wiki/No_Place_That_Far?oldid=23002"
Community content is available under CC-BY-SA unless otherwise noted.