Rayna returns home from the hospital where she's promptly given the cold shoulder by Maddie. Teddy, on the other hand, welcomes her with open arms. He declares that he'll be staying at the house until Rayna is back at full strength. Bucky visits to say that a bean counter named Jeff Fordham has taken over Edgehill Records. Rayna wants to meet with the guy ASAP to protect her new Highway 65 label. Scarlett and Will join her in Jeff's office where the new boss promises he'll have Rayna's back. That’s not entirely true though. Jeff pops by one of Will's shows asking him to sign with Edgehill straight up. That means he has to ditch Rayna.

Rayna and Teddy share a nice hand-holding moment at the house until Bucky interrupts with the news about how Jeff is trying to poach Will. So much for the guy having her back. Rayna lets Jeff know that she's not about to let him take Will. The battle is on to see who will sign him first. Rayna makes her pitch. Will has a lot to think about regarding his career which now includes Brent, the guy he met awhile back. Turns out he's Jeff's marketing and PR guy. He promises to not blow his ladies' man persona no matter who Will picks.

Juliette's guest gig on Conan O'Brien's show starts out fine but ultimately delves into a love-fest for Rayna James. The hits keep coming once Juliette meets with Jeff Fordham. The guy isn't impressed with the direction of her music. Her latest album just isn't doing well with the tween crowd. Juliette decides to up her sales on iTunes by heading back to the Alabama trailer park where she lived as a kid. A camera crew is there to capture all of her heartfelt memories. Avery notices how upset she gets when a former neighbor gives her a handmade quilt. Juliette makes mention of her dad during the interview. He passed away when she was four.

Scarlett is assured by Rayna that her living with Deacon won't be an issue regarding the two of them working together. She desperately tries to get her uncle to snap out of his angry funk. Scarlett drives a reluctant Deacon to the doctor's office for the lowdown on his hand. The prognosis is not bright, but it's not hopeless either. With lots of painful physical therapy, Deacon could make a full recovery. That's not how he sees it though. He believes his playing days are behind him. That's why he wants to put all his guitars up for sale, apart from one that was a gift he intends to return. He also lets Scarlett know that the reason he fell off the wagon is because he found out Maddie was his daughter.

Rayna meets up with Deacon at the site of their car crash. A memorial has been there since the accident. Deacon knows he had no right to call her, but she's always been his go-to person. Rayna says the fact that they didn't die at this spot may be a sign they should both move on without each other. She hands him the ring he gave her awhile ago. She'd always thought they might need it someday. That's not the case now, so Deacon leaves it at the memorial. As for Rayna, she lets Teddy know that they shouldn't continue sharing the house. Daphne overhears this. Maddie assures her sister that it’s the two of them against the world now.

Zoey helps Gunnar get over his case of writer’s block by encouraging him to sing about heartbreak. You'd think the tune he cranks out would be about Scarlett, but it's not. It's all about his brother. Will is impressed. He knows Gunnar is a great songwriter. He also knows that's not him. He's a performer. That's why Will shows up at Jeff’s party to proclaim he's signing with Edgehill, not Highway 65. Needless to say, Rayna is disappointed. Juliette, on the other hand, is very happy because her song hit number one on iTunes. She makes sure that Jeff knows this when she arrives at his party.

Jeff introduces Juliette to a young lady named Layla Grant. He just signed her after she finished second on a reality TV series, American Hitmaker. She is, however, number one on iTunes at the moment. Juliette's shock is amplified when Layla takes the stage at Jeff's party to belt out one of her tunes. In other news, Scarlett advises her uncle to man-up regarding all the self-pity he's feeling about his hand. So Deacon does. He saws off his cast and tries his best to play the guitar. It's painful, but at least he's trying. Finally, Rayna believes that maybe she doesn't belong at the label she built anymore. Maybe it’s time for a change. 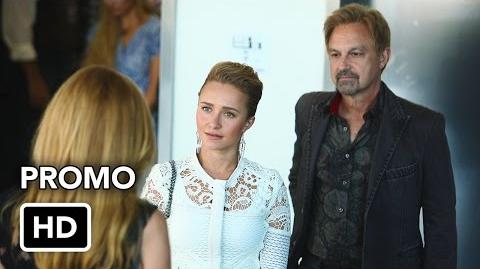