My Heart Would Know

My Heart Would Know is the seventeenth episode of the first season of Nashville. It was written by Mollie Bickley St. John and directed by Sanaa Hamri. It first aired on April 10, 2013.

Ranya takes the girls back to Nashville once she gets word that Lamar has suffered a heart attack. She visits with her dad while Tandy talks business with a guy named Albert, who wants her to get up to date as CFO before talking to her father. Lamar is as ornery as ever as he tries to do business from his hospital bed. He almost blows a gasket when he catches sight of Watty in the hospital hallway. Rayna is confused by the outburst. She later learns that Watty was the other man in her mother’s life, not that that's why he'd helped Rayna; he'd recognized her talent. The night her mom crashed her car, back when Rayna was 12, her bags were packed to leave Lamar. According to Tandy, he didn't say anything about her mother's affair, because he idolized her. But her love for Watty is why Lamar was so angry, back when Rayna was 16 and Watty got Rayna her first paying gig, that she was "kicked out of home" (as she puts it).

Now that Juliette and Dante have become intimate, they agree it’s best to keep their coupling a secret—especially from Jolene. However, they have no problem flaunting their business relationship. They decide to expand Juliette’s show by 10 additional songs to make up for the MIA Rayna. Dante is integral in this decision. He’s not going anywhere even though Jolene desperately wants him to take her back to Nashville. In other news, Avery begins life as a roadie. He accidentally catches a glimpse of Juliette and Dante in a compromising position. So much for secrets! A short time later, Dante lets Avery know that he’s fired.

Deacon gives Stacey a key to his place back in Nashville. He wants her to make herself at home while he’s on the road. He also leaves Rayna a message to say she’s in his thoughts. Deacon lets Juliette know that her plan to expand her show is not fair to her band and crew. He quickly realizes how much influence Dante is having on her. Deacon lets the new man in Juliette’s life know that Avery is back on the job. He’s to stay away from him from here on out. Deacon is shocked to learn that Juliette shared the intimate details of their past with Dante. He doesn't trust this guy at all.

Juliette catches her mom trying to kiss Dante. This leads to a big blow up in front of the crew. Jolene quickly realizes that her daughter and her sober life coach are sleeping together. Again, so much for secrets. Come show time, Dante looks on as Avery goes about his work. On stage, Deacon does his best to ignore Juliette. The two of them get into a shouting match backstage. Deacon believes Juliette should have canceled the show. That’s just something you do when there’s a family emergency. Juliette says Rayna isn't her family, nor his. He lets Juliette know that Rayna is family to him. As for Dante, Juliette officially makes him her new manager and sends her mom home without him. Emily is to find Juliette's mother a female sober companion.

Lamar has another heart attack in the hospital. Bypass surgery goes well, but he’s still not out of the woods. Rayna stays by his bedside. Deacon shows up to give Rayna a big, long hug. Her voicemail message made it sound like she needed him. They get to talking about when she left home. As he recalled it, she wasn't exactly kicked out of home at 16. She'd been given a choice. Lamar had said she could stay if she'd abide by his rules. "That was never going to happen", says Rayna. Deacon eventually says a reluctant goodbye before heading over to see Stacey. The hug he gives her doesn't seem as meaningful as the one he gave Rayna, who tells her unconscious dad that they missed a lot of their life together because he was so angry at her mom. This is just before Lamar opens his eyes.

Gunnar is all about celebrating Scarlett’s success with Edgehill Records. Will comes along as they hit the clubs. He convinces Scarlett to join him on stage for a duet. Gunnar sits this one out. He’s just not into music at the moment. Will believes the only way to get over death is to tempt it. That’s why he plays a harrowing game of chicken with a train. A freaked out Gunnar jumps out of his truck after the boys survive the stunt. He’s angry at first, but feels the rush. It’s enough to get him playing his music again. As for Scarlett, she’s overwhelmed by the reception she’s given at Edgehill Records.

Peggy knows she has to keep her distance from Teddy until the situation with Lamar stabilizes. Still, she can't help calling him while he’s with the girls sounding a tad unstable herself. She lets Teddy know that she loves him. Later, Tandy discovers that Peggy has been making lots of phone calls to her father. She gives Teddy phone records that point to his girlfriend as having been the one who leaked the news of his divorce from Rayna. 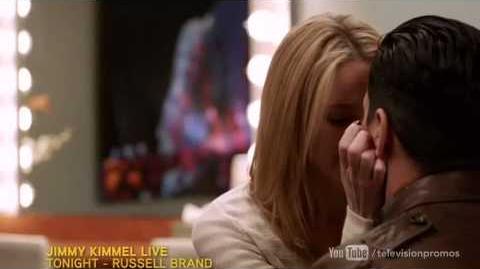