Move It on Over

Move It on Over is the fifth episode of the first season of Nashville. It was written by David Marshall Grant and directed by producer Lesli Linka Glatter. It first aired on November 7, 2012.

The episode begins with Deacon playing for a song that Juliette is recording. Deacon comes out for a break and he tells Glenn that Juliette doesn’t want to go home. Glenn says that the problem is her mom and that she is going to be around for a while. Randy tells Juliette that the guys can’t stay any longer as she has pushed their limits. She cuts him by saying that she is paying them. Deacon tells her that he can help her by pushing her mother into a bunch of programs. He knows all about it, since a long time ago he had walked a similar path. Rayna tells Bucky that she needs a new guitar player.

Teddy meets Peggy and she says that she doesn't want to go to prison. She tells him that the auditors want to question her this week and they are going to go over her accounts and they will find the 2 million she and Teddy had embezzled. Teddy tells her to give him a day and he assures that he would find a way to protect both of them. Hailey tells Gunnar that she wants to keep things uncomplicated as she doesn't want to get in the middle of something. Gunnar knows that she is talking about Scarlett and he tells her that she (Scarlett) has a boyfriend. Jeannie tells Gunnar and Scarlett that a producer is coming the next day and she wants Scarlett and Gunnar to play.

She goes to Jolene’s room and finds her asleep with a man in her bed and there are pills on the table. Juliette throws the guy out of her house and Jolene thinks that she is always mean to her. Juliette says that Jolene is embarrassing and Jolene rebuts saying that Juliette was the one who stole the nail polish from the store. At the mayoral debate, Coleman claims that Teddy was known to have been born with a silver spoon and used that spoon to dig a grave of financial losses that he can never get out of. He is known to inherit money and then lose it. Juliette calls Deacon for help.

Avery arrives home and hears Scarlett telling her mother that they are planning to add a new guitar player for a bigger sound. Avery says that he can play if she wants him to. Scarlett is happy.

Rayna arrives at Deacon’s place and wants to talk to him about a commercial for which she's been filmed singing a song they co-wrote; she wants him to help her make it happen by approving use of the song. Deacon objects to the lyrics having been tweaked. He doesn't want their song to be played in a commercial for beauty products. He wants to stay true to the music. Rayna is pissed that he doesn't want to do this but he is fine with going with Juliette and singing their songs. And, Rayna argues, she is trying to stay true to the music by earning the money to keep playing it. He still says a no to signing the release forms. Bucky tells Rayna that he isn't able to get any guitarists as they are all busy.

Teddy tells Lamar that Coleman brought up the busted real estate deal and Lamar knows that he lied about it in the vulnerability test. Lamar tells him that if he wants his help, he has to tell him everything. He says that he put in his money, the market fell down and the taxes came through. So he did what he had to do; he ended up embezzling the funds. He did it to protect his investors. Lamar wonders why Peggy helped him to commit fraud and he tells Lamar that she may have wanted more from the relationship but that was only from her end. They paid up the money but now there is a federal audit. Peggy is scared. Lamar asks him to concentrate on the campaign and he will take care of it.

Juliette brings Deacon home to meet Jolene. Avery, Gunnar and Scarlett play in front of the new guys and they notice Avery’s guitar work as he makes it a point that the guitar overpowers the song Gunnar and Scarlett are singing. Deacon talks to Jolene and tells her that he knows a good place. He says that she and her daughter both need each other and it is important that she is clean. Jolene agrees.

Gunnar confronts Avery and the latter is pissed that Gunnar and Scarlett were making eyes at each other. Gunnar tells him that it was acting and Avery feels that it was damn good. Hailey interrupts and calls Gunnar outside. Avery leaves the room too and finds Scarlett standing there. Deacon brings Jolene to the rehabilitation center and takes her pills from her. Jolene doesn't think that she can do this and she slaps her daughter for making her do it. But then she goes inside. Later Juliette tries to kiss Deacon to say a thank you. But he stops her and says that she could simply say thanks. Juliette tells him that whenever someone has been with her, they have always wanted something from her. Deacon tells her that she needs to spend more time by herself. Scarlett comes to meet Gunnar. She says that she is with Avery and she wants things to be clear. He tells her that he is with Hailey.

Teddy arrives home and Rayna is writing a song by herself for a change. He wants to know what happened between her and Deacon as she cancelled the tour and now he isn't working with her. He wonders if Rayna still wants to sleep with him. Rayna tells him that they need to put the past behind them. He says that he is trying. Deacon talks to Coleman and says that it was tough for him to go visit the rehabilitation center, and gives him the pills from Jolene so as to resist temptation from taking them himself. Lamar meets Peggy and tells her to do as he says and that he will take care of the rest. Deacon then sings a song (Sideshow) at the Bluebird. Juliette cleans up the house and she wants everything her mother touched out of there and she wants to get rid of the house. At the Bluebird one of the guys asks Deacon where Rayna is, as he likes it better when she sings.

Scarlett arrives home and she is pissed at Avery. She tells him that the producer told them that Avery hijacked the show and now they didn't get the contract. She reminds him that it was “their” big shot and not his. She tells him that she chooses him. He tells her that he wants them to be their old selves. Scarlett feels that he wants her to get back to writing poems and keeping them to herself. Deacon gets into a fight outside the Bluebird with the guy who was asking about Rayna. Rayna gets a call from a detention center, addressed from Deacon. Teddy asks who it was. She says it was nobody.

Gunnar tells Hailey that he doesn't want to pretend to be just friends. He likes her and wants things to get complicated. Deacon walks out of the detention facility and finds Juliette waiting for him. She bailed him out. That's what friends do. He thanks her. Teddy goes through Lamar’s plans and he says that if Rayna knows about it she will flip and Coleman will break all hell free.

But Lamar asks him if he wants to win and if he does then he needs to do exactly what he asks him to. Rayna sings the song she has written and Bucky says that he loved it. She then tells him to call Marshall Evans and cut the deal. They are happy. Deacon calls Bucky and tells him that he is fine with them using the song and that he is going to let it go. Juliette arrives at her new house. Peggy and Teddy are relieved that they passed the audit. Lamar is a genius. Someone clicks pictures of Peggy and Teddy together. 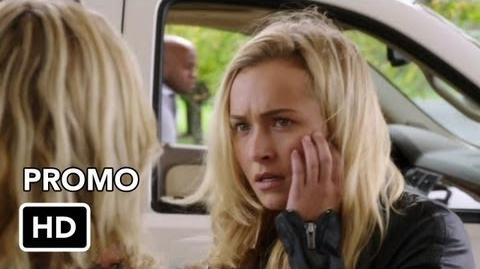