Maddie Conrad (later Maddie Claybourne then Maddie Jaymes) is the daughter of the late Rayna Jaymes and Deacon Claybourne, though Teddy Conrad is legally her father. She is a recurring character in Season One of Nashville and a main character from Season Two onwards.

She is the elder daughter of the late Rayna Jaymes and Teddy Conrad. Along with younger sister, Daphne, she is a huge fan of Juliette Barnes.

When Teddy and Rayna announce their plans to divorce, Maddie takes it hard and begins to rebel against her mother. She ditches school to attend a free concert thrown by Juliette, but ends up being injured in a stampede.

Towards the end of the season, she discovers that Teddy is not her biological father. Distraught, she confronts Deacon with this information, which leads to him returning to his drinking ways, because he hadn't known either. The end of the season sees Deacon and Rayna involved in a car crash.

Following the car crash, Maddie starts to feel guilty, but Juliette tells her not to, and gives Maddie her number so that she can contact her at any time. She reveals to Juliette that Deacon is her biological father. Rayna is soon released from hospital, but her relationship with her elder daughter continues to be tested. When she and her daughters attend a charity benefit gala thrown by Lamar, Maddie sees her grandmother's engagement ring around Peggy's neck, and runs away. Juliette comes to her aid, and later calls Rayna to reassure her Maddie's safe. She also promises to keep the news of Maddie's true paternity a secret. Rayna and Maddie have a heart-to-heart, mending their relationship.

Maddie soon announces that she wants to get to know Deacon better. She and Rayna go to the Bluebird where Deacon is performing, and they meet up afterwards. Deacon and Maddie realize they have much in common. They start to meet up for guitar lessons and she performs a duet with him at her open mic performance, which angers Teddy, leading to a confrontation between the two men. When Deacon experiences writer's block he turns to Maddie for help and they write a song together. At Juliette's induction ceremony at the Grand Ole Opry Maddie goes to see Juliette in her dressing room and greets Deacon with a hug, but Maddie tells him Juliette already knows they're father and daughter.

When Maddie is playing guitar Teddy walks in to talk to her about her feelings towards Luke and Rayna's engagement. She tells him that she can't talk to him about it because she wanted Deacon and Rayna to get married and she knows that he hates Deacon.

Maddie goes dresser shopping with Deacon and is upset about him leaving for tour and Rayna's engagement to Luke. Maddie and Deacon then go back to Deacon's house to assemble the dresser and tells him that she is upset with him for not fighting for Rayna. He then tells her that he proposed to her and she said no.

Maddie continues down her rebellious path and although Rayna and Deacon eventually become a couple after she splits from Luke, she continues to cause trouble and becomes friends with the daughter of Deacon's sober sponsor and business partner. Maddie wishes to be emancipated and is granted it after lying about Deacon being abusive. However, after she travels to New York to pursue making it big Deacon comes to her rescue after Rayna tells him about Vince Pierce, who she worked with in her early career.

Maddie moves home with her family and starts to mend her ways, beginning a relationship with street musician Clayton Carter. When Rayna is involved in a car crash Maddie feels guilty for being so horrible to her but Rayna eventually succumbs to her injuries and dies. After performing a tribute to her late mother at the CMT Awards, the media starts to take a interest in her and Juliette takes her to New York for interviews, where she changes her stage name to Maddie Jaymes in honor of her mother. However, Maddie feels unable to continue with promotion and returns home. After chatting with Juliette, the latter sees the potential in her and offers to manage her career.

Things rapidly deteriorate for Maddie following a run-in with the police after Clay is driving her home from an unpleasant interview where she is questioned about Rayna. Video footage of the incident is posted online creating a media storm. They continue to hound Clay and a journalist approaches Maddie, telling her that he approves of her sticking up for the black community. However, Clay breaks up with her and after some nasty memes start trending on Twitter coupled with her refusal to read an apology issued by Highway 65, she videotapes her apology and sings a song with Daphne.

When she discovers the truth behind the nasty memes she throws Liv out of the house and refuses to speak to Daphne, only to later apologize to both of them. Bucky also agrees to take on the role of managing her career.

She begins a new relationship with teen sensation Jonah Ford and befriends a member of his entourage named Twig Wysecki. The two later bond after the former leaves her alone for the weekend after inviting her to join him in Miami and she helps Twig after he is coaxed into trying magic mushrooms.

Twig starts to develop romantic feelings for her but she does not reciprocate them as she is with Jonah. Jonah's ex-girlfriend Mia gets back in contact with him and threatens to kill herself after he tries to end contact with her. He tells Twig to keep his secret but when Mia shows up at Jonah's mansion during a pajamas party she and Jonah end up sleeping together, which Maddie soon finds out about, leading to her breaking up with Jonah. She is initially angry with Twig for keeping it a secret from her but after Twig fights with Jonah and refuses to go to Europe with him, he shows up at the benefit concert at the ranch to tell Maddie what he has done. They end up becoming a couple.

In the series finale, she decides to call off her relationship with him as she wants to be on her own for the time being, A few months later, she moves into her own house and looks at a photograph of her with her parents and Daphne on their wedding day. 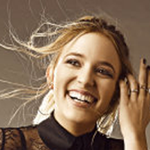 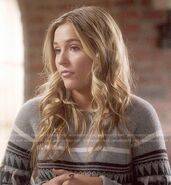 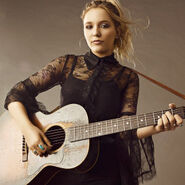 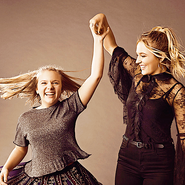 "The Blues Have Blown Away" (with Daphne Conrad and Rayna Jaymes)

"Heart On Fire" (with Daphne Conrad)

"This Is Real Life" (with Daphne Conrad and Rayna Jaymes)

Anywhere From Here (with Daphne Conrad and Beverly O'Connor)

"All We Ever Wanted" (with Daphne Conrad)