Leap of Faith is the fifth episode of the fifth season of Nashville. It was written by Jesse Zwick and directed by Ron Lagomarsino. It first aired on January 26, 2017.

The episode opens with The Exes' shooting their new music video at historic Ridgewood Mansion. However, while shooting the video, which sees Scarlett crawling along a long dining table and fixing a woman's lipstick while Gunnar sits at one end, Scarlett wants to stop filming as she's uncomfortable with what Damien wants her to do. Damien wants her to unleash her seductive side but it's clear that Scarlett is not comfortable with that and lets him know how she feels. However, she soon goes along with his orders and "slaps" Gunnar on the face.

As Maddie hangs out with Clay, he takes her to a bar on his side of town and performs to audience. After they leave, she tries to kiss him but he backs away telling her that he should get her home as it's late. As Daphne teases her about her new relationship, Maddie kicks her out when he phones to apologize and she sings a new song she wrote to him. She then tells her parents that she's heading out to meet a boy and when she shows up at his apartment she sings the song again and tries to kiss him but he backs away again, saying they shouldn't get close as he's black and she's white. She stomps off but later tells Juliette about her boy troubles.

Meanwhile, Rayna has called in Randall to have a chat after she notices her trinket box is missing from her desk and she locates it in his desk drawer. When he is questioned about the letter she received, he has no idea what she's talking about and Bucky gets him to write a sentence. Examining the writing, it proves he did not send the letter.

After wrapping shooting for the day, Damien and Gunnar go for a drink and the latter admits that Scarlett never thinks about herself. The following day turns out to be worse than the first as Scarlett and Damien come to blows again, which leads to Damien telling a crew member to erase the video footage they already have. Although Rayna notices how unhappy Scarlett appears the latter ends up going ahead with Damien's orders and he later thanks her. Meanwhile, Zach introduces himself to Will and gives him his phone number so that they can talk about his career after he enquires about Luke Wheeler.

As Clay performs outside a bar, two white men approach him and tell him his song is terrible before preceding to beat him up. When Maddie calls by to see him, she's shocked to discover he's battered and bruised and phones for an ambulance. As she waits for him at the hospital she ignores messages from Rayna but when he's given the all-clear she works out that he's bipolar and he says he can't write songs when he's on his meds. He says he sees no future for them as a couple. However, the following morning as Maddie tells her parents what happened Clay calls to the house to finally introduce himself as Maddie's boyfriend.

The episode ends with a man showing up at the Highway 65 offices demanding to see Rayna and as Bucky tries to escort him away, she realizes he's the same man who asked her for a selfie and enquired about Maddie. She asks for the cops to be called as he yells out that he just wants to talk to her. 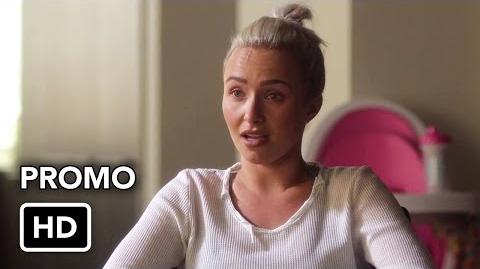