It's All Wrong, But It's All Right

It's All Wrong, But It's All Right is the thirteenth episode of the second season of Nashville. It was written by Debra Fordham and Bethany Rooney.  It first aired on January 29, 2014.

Rayna brings in Liam to work with Scarlett but he's unimpressed with what she's doing and ends up finding her diary, locking himself in a room to read it while she shouts at him. When he emerges, she tells him that her mother has been unstable for as long as she can remember and was even admitted to a psychiatric hospital. After working through the night, Scarlett has written a song about her mother and Liam gives her some prescription drugs to help with her tiredness.

Meanwhile, Deacon's label wants him to record an album of collaborations so before Juliette takes to the stage at the Opry, he asks her to sing on the record with him but she declines, saying that people tend to burn the material she sings on. Moments after Brad Paisley introduces her onstage, Juliette tells the audience how Jeff had expected her to formally apologize with the use of the teleprompter and decides to do things her way, so she sings the song she and Avery wrote called "Don't Put Dirt on My Grave Just Yet". The audience is less than impressed, but politely clap, and afterwards Rayna appears at her dressing room door to tell her that wasn't very smart but it sure was brave. Jeff angrily tells her than she's no longer part of Edgehill and calls her stupid. Juliette responds with how he's lost his two biggest artists within six months of becoming the label's CEO.

Later, to thank Avery for his help, Juliette makes him some pasta and calls to his apartment with it. She ends up revealing her true feelings about him and they kiss before ending up in bed together.

Luke introduces Rayna to a power player that could help her get her distribution deal off the ground, and then surprises her with a NASCAR wrapped in Rayna Jaymes' graphics. However, she soon discovers that the distribution deal means that Juliette will no longer have a place on his shelves. She ultimately turns in down, telling Luke that she wants Highway 65 to be a place where artists are free to be themselves. Layla decides to seek help with songwriting from Gunnar, but he ends up upsetting her, leading to a confrontation with Will, in which he advises Will to tell Layla the truth.  Will and Layla discover they aren't all that different and find comfort in one another's company.

Rayna thinks Tandy is at a spa in Napa but in reality she's hiding away from the U.S. Attorney office in a motel in Biloxi. Failing to get a response to their texts, the feds bust into her motel room and arrest her for failing to testify at Lamar's hearing. Megan gets Teddy to turn on the TV and a news report reveals that Lamar is set to be released from prison. 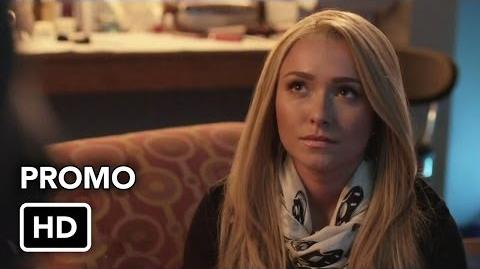