If Tomorrow Never Comes is the ninth episode of the fifth season of Nashville. It was written by Geoffrey Nauffts and directed by Callie Khouri. It aired on February 23, 2017.

As a seriously injured Rayna is admitted to hospital, Deacon rushes there while trying to contact Maddie to tell her what has happened. He also contacts Scarlett, who is sleeping with Damien again, and she heads to Daphne's school to inform the staff about what has happened. Meanwhile, Juliette is at home with Avery and is freaking out about a possible infection that she may have in her leg before they receive the phone call about Rayna being admitted.

Deacon is the first to show up at the hospital and learns that Rayna has a fractured pelvis but has been put on morphine for the time being. Deacon goes to her room to see how she is doing and she says that they need to finish writing their album. When Maddie arrives she has a panic attack upon seeing her mother and runs to the restroom where Scarlett has a chat with her. However, Maddie runs from the hospital and asks Clay to drive. Meanwhile, Rayna is taken to theater for her surgery.

In the waiting room, Deacon and Daphne are kept company by Bucky, Scarlett, Gunnar and Will. When Deacon suggests that Daphne goes to her school concert she says that she does not want to leave her mother. As Clay takes Maddie for a walk on the bridge where Deacon proposed to Rayna, she describes her panic attack and Clay says he understands since he saw his mother going through the same thing. Four hours pass before a doctor comes by to tell everyone that Rayna's surgery went well and that she should be able to go home in a few days. Juliette and Avery arrive at the hospital to be greeted by the paparazzi but refuse to talk to them. Juliette demands to know what room Rayna is in and refuses to take 'no' for an answer when the nurse will not tell her. Juliette gives Rayna a sleeping mask and they have a heart-to-heart about their past.

Having been told to go home for the night, Maddie and Clay go to his place instead and she pours her heart out about how horrible she has been to her mother. The following morning, Deacon calls by with a cheeseburger and a smooth for Rayna. She is beginning to remember what happened prior to the crash and wants to finish working on her song with Deacon. Scarlett offers to go home to get Deacon's guitar and while Gunnar tags along he lays into her for not calling the day before when she was late for dinner. She decides to ignore him but later when he shows up at the hospital, he tells her he is prepared to fight to win her back, but she does not know what she wants.

While Daphne sleeps nearby, Deacon and Rayna are discussing lyrics. She feels there is something missing but Deacon tries to advise her to get some sleep. Scarlett later tries to comfort Daphne when she says she has nowhere to go since her dad is in prison, Maddie is with Clay and she does not want to leave her mother's side. She is still refusing to go to the school for her concert and when Maddie receives a text to say that her sister is having a breakdown, she is stuck in a traffic jam with Clay.Back in Rayna's room, she is trying to find a tag for her song when a finely-dressed woman sitting near her tells her that her song is finished. It is the ghost of her mother who tells her she has always been watching over her and is proud of the woman she has become. Deacon enters the room to be told by Rayna that her mother was telling her that their song is finished. He discusses the situation with a doctor who says it is not usual for patients to act like that when on medication.

Scarlett calls by to have some alone time with Rayna and to talk about Damien. Rayna says that just because Gunnar is wanting to fight for her it does not necessarily mean he is the right person for her. Daphne later lies with her mother who encourages her to go to her concert. She tells her daughter that she loves her and that Deacon loves her too. Daphne decides to fulfill her mother's wish but her schoolmates turn up at the hospital with her choir master, having been encouraged to do so by Flynn. They decide to sign to Rayna but this is cut short when she suddenly starts having a seizure. As the doctors rush to her aid, Daphne and her schoolmates are ushered from the room.

Meanwhile, Juliette is remaining at the hospital as she wants to find out what is happening with her leg. As Rayna is taken to ICU, Maddie is stuck in traffic. After receiving a text from Deacon, she decides to return to the hospital on foot. The doctors tell Deacon that Rayna's kidneys are shutting down and with the fractured tissue having leaked into her bone marrow there is not a lot they can do for her. Deacon sneaks into Rayna's room and through labored breathing, she asks what is happening. She starts to say her goodbyes but he tells her not to leave him and the girls. Rayna just tells him she is sorry.

Juliette is talking to a doctor about her X-rays and when a nurse informs her that she is needed in ICU, Juliette overhears the part about the patient crashing and realizes it is Rayna. This is enough for her to toss her crutches aside as she returns to Rayna's room. As the doctors tell Deacon his wife's organs are failing Daphne cries as Juliette tells Rayna all she wanted was to make her proud.

Maddie arrives and everyone clears out to give Deacon and the girls alone time with Rayna. Daphne addresses Deacon as "Dad" and asks if her mother knows they are there. He says she does but Daphne is unsure what to say to her mother. Maddie decides to sing to her before Deacon and Daphne join in. Suddenly, Rayna opens her eyes but as Deacon smiles her heart monitor flatlines and she dies. 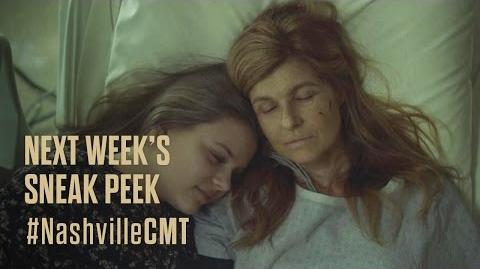