I Saw the Light

I Saw the Light is the sixteenth episode of the first season of Nashville. It was written by Wendy Calhoun and directed by Julie Haber. It first aired on April 3, 2013.

Rayna is totally jazzed to have her girls along on her trip to New York. Maddie is dreaming of becoming a performer someday. Rayna is doing her best to dissuade her daughter from a show biz life. Still, it’s hard for Maddie to not be blown away by her mom on stage as she drives the crowd wild. Daphne longs to sing, too. Tandy says Rayna sounds like she isn't supporting the dreams of her kids. She even compares her to Lamar, as he did the same thing to his superstar daughter when she was younger.

Rayna tries to explain to her girls why she is hesitant to jump onboard with their plans to be music artists. But that doesn't mean she doesn’t support their dreams. She lets Daphne and Maddie take the stage to perform a song they've been working on for the concert sound check. It’s a sweet moment as the girls bring a big smile to anyone in earshot. They are both natural performers just like their mother. Later, Rayna lets her sis know that comparing her to Lamar was a low blow. Tandy was only trying to get her attention. She says Rayna used to think Lamar could do no wrong. She was such a daddy’s girl. Of course, that was a long time ago.

Juliette is trying her best to be very Zen and not get upset about things she cannot change—like the 50-foot billboard of Rayna Jaymes outside her NYC hotel room. Dante offers an unexpected show of support when Juliette wonders how to land a big time sponsor. He coaches her on how to get Marshall to set her up with a major cell phone company. Things go well and Juliette gets the meeting. She convinces Dante to go with her. That means he has to blow off therapy with Jolene.

Juliette is poised and confident as she pitches herself to the cell phone company. She charms them to the point where they believe that her best days are still in front of her. Juliette is on cloud nine until she comes home to her sad mom. Jolene wishes her daughter felt more for her than she does for some cell phone deal. Her words hit home. At her concert, Juliette dedicates her new song to her mama. Later, she thanks Dante for all that he’s done. That’s right before she kisses him. Dante is hesitant at first, but Juliette convinces him that giving into their passion is a good thing.

Deacon is getting serious with Stacey the vet even though they've only been dating a short time. He asks her to join him in New York. Rayna is surprised when this pretty lady introduces herself as Deacon’s girlfriend. It’s obvious to Stacey that her new boyfriend has a past with both music superstars in the house. She wonders if things are truly over with Rayna. Deacon assures her that it’s all history. He also believes life on the road could be history. Maybe it’s time to hang up his guitar and settle down at home in Nashville. The road is no place for a dog named Sue.

<Scarlett and Gunnar meet their new upstairs neighbor Will. Surprise, surprise! The guy’s a musician. He hands them some mail, which is how Gunnar finds out about the record deal, from Edgehill Records, that Scarlett was offered over a month ago. Gunnar is upset that she didn't tell him. She says she wanted to persuade them to include him. But not telling him sounds, to Gunnar, an odd way to include him. After song-writing with Gunnar, Will asks him how come Scarlett got a contract and he (Gunnar) didn't. Gunnar admits he didn't handle his brother's death well. He should have let Scarlett postpone their audition. Later, Scarlett tells Gunnar she won't sign the deal. Gunnar tells Scarlett to sign it. He’s not jealous of her like Avery would be. Gunnar is proud of her success. He’s excited about it. And he loves her. She kisses him.

Avery is feeling the repercussions of burning his masters. Hailey informs him that he needs to get a new record deal or pay back his advance. That’s going to be difficult when you’re persona non grata in Nashville. Marilyn has put the word out that clubs will not get her business if they hire him. J.T. happens by while Avery is busking in the street. He gives him the name of a guy who can hook him up on a roadie gig. So Avery packs up his guitar. He’s off to New York to join up with a tour.

Peggy stops by Teddy’s place wearing an overcoat and nothing underneath. Subtle she’s not. In other news, Lamar asks Coleman to persuade Teddy to use his land for the new stadium deal. That’s not going to happen. Time for Plan B. Lamar tells Peggy it would be in her best interest to persuade Teddy to send the stadium deal his way. He knows this is the lady who leaked his daughter’s divorce news to the tabloids. So Peggy does a soft pitch to Teddy, saying Lamar could help Teddy become Governor. As for Lamar, he’s relishing his latest power play until he goes into physical distress. He looks like he may be having a heart attack. 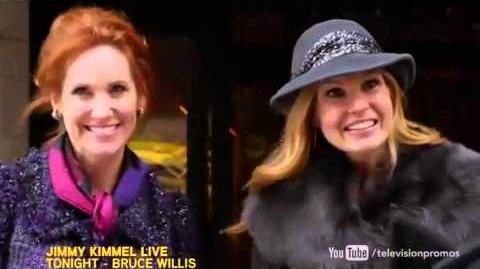