Nashville Wiki
Register
Don't have an account?
Sign In
Advertisement
in: Episodes, Season 2 Episodes, Episodes Airing in September,
and 2 more

I Fall to Pieces

I Fall to Pieces is the season premiere of the second season of Nashville. It was written by Dee Johnson and directed by Michael Waxman. It first aired on September 25, 2013.

The car carrying Rayna and a highly-intoxicated Deacon is a mangled mess after a horrific crash. Sirens can be heard in the distance. Deacon is hurt, but able to pull Rayna out of the wreckage. She’s unconscious. Two weeks later, a worried Maddie and Daphne hover over their mom in her hospital bed. Rayna Jaymes is in a coma.

Deacon, with his arm in a sling, appears in court to face charges for the accident. Teddy is in the gallery to make sure justice is served. The judge sets bail at a million bucks. This gets him a nod of approval from the mayor. As for Deacon, he’s ready to plead guilty right away. The judge warns that the charges against him will be upgraded to involuntary manslaughter if Rayna dies.

Juliette is upset over all that’s happened with Rayna. The tragic situation threatens to steal the spotlight from her upcoming album release. Her label has been sucked into a big conglomerate, so there’s no one who can help her push the date. Juliette is on the hunt for a new personal assistant. She interviews a good-looking young man in bed, but he may not get a callback based on his performance. Juliette has other things on her mind after seeing a candlelight vigil for Rayna on the news.

Scarlett is winding down her days as a waitress at the Bluebird after signing a record deal. She gives her longtime friend, Zoey, the 411 on the routine at the club. Scarlett has been sleeping on her gal pal’s couch lately because she turned down Gunnar’s marriage proposal. It may have something to do with Avery, who sings “How You Learn to Live Alone” to the crowd. Scarlett always loved that one. Zoey wonders if she’s talking about the song or the singer. Scarlett also has her uncle on her mind. Her plea for Juliette to spot her a loan for bail is rejected. She’s advised to let her addict uncle go before he disappoints her again.

Juliette holds her album launch concert. It ends up being a tribute to Rayna. She even sings her tour co-star’s hit song “This Love Ain't Big Enough” to a cheering crowd. She also leads all the fans over to the hospital as a show of support for Rayna. By all appearances, this seems like a beautiful gesture. But Avery noticed that many of the slideshow pictures of Rayna that ran during the concert also featured Juliette. That’s some good PR.

Flashbacks show happier times when Deacon first came out of rehab. He surprises Rayna with a home he bought for the two of them. A day came when Deacon asked Rayna to marry him even though he knows she’s been seeing Teddy. He gives her a ring which leads to the two of them making love. The next morning, Rayna realizes Deacon is drinking again. He doesn't even remember proposing to her. That was the beginning of the end for them. By the time Rayna realized she was pregnant, Deacon was out of control with his addiction.

Lamar feels guilty for not being by his wife’s bedside when she passed away. He’s by Rayna’s side now asking for forgiveness. Later, Maddie and Daphne are shuffled out of the room when their mom takes a bad turn. Teddy tries to comfort his oldest daughter as she struggles to understand how her biological dad could do this to her mom. Maddie is thrilled that Juliette showed up at the hospital. The two of them have a heart-to-heart chat where Maddie inadvertently reveals that Deacon is her dad.

Will tries to help Gunnar get over the Scarlett situation by throwing a monster party at his place. There are lots of girls there to take his mind off his lady woes. There’s also one guy from Will’s past. The two of them nearly have an intimate moment. Then Will realizes the consequences this would bring. He tosses the guy out accusing him of trying to make a move on him. As for Gunnar, he thinks burning the sofa Scarlett left behind will help him move on. It doesn’t. That’s why he decides to head down to the Bluebird. Scarlett invites him up to sing “Why Can't I Say Goodnight.” Gunnar says he did the duet because you don’t give up on the ones you love.

Conrad lets Peggy know that he already has a family. He can offer her financial support for the baby she’s carrying by him, but nothing more. Peggy is crushed to learn that she miscarried, but she leads Teddy to believe she’s crying because she heard the baby’s heartbeat. Juliette is also teary-eyed as she recalls memories of when she and her mom used to listen to Rayna’s music together. She has a change of heart about helping out with Deacon’s bail. In other news, Tandy is approached by someone from the Justice Department. The man claims that Lamar may have had something to do with her mother’s death. It seems her car accident was no accident.

Rayna’s vitals begin to spike, but she stabilizes to the point where she can be brought out of the coma. However, there’s no guarantee that her cognitive skills will be in the best shape. The doctor asks if she recognizes her worried family as they wait in the doorway. She nods. Her relieved loved ones rush to her side. Rayna looks like she’s going to be okay. She confirms that Deacon wasn't driving the night of the crash so he’s released from jail. Rayna lets her father know that she hopes to move forward from here. Lamar agrees that it’s often best to leave the past in the past. 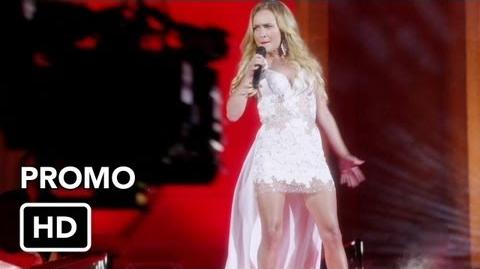