I Don't Want to Lose You Yet

I Don't Want to Lose You Yet is the penultimate episode of the final season of Nashville.  It was written by Liberty Godshall and directed by Allan Arkush.  It aired on July 19, 2018.

Juliette is riding the wave of bad press surrounding her fallout with the Church of Coherent Philosophy but she is remaining upbeat about it and refusing to go down without a fight. As Avery arrives after battling his way through a sea of reporters on the lawn, Juliette tells him that she thinks Cadence has a fever. Later that day, Juliette calls a press conference at the movement's headquarters after having rescued Rosa and her son. Following their introduction, she announces that she has decided to retire from public eye, noting that Darius had taught her about the price of fame. She ends by saying that she will not stop fighting until justice prevails.

Over at the Jaymes-Claybourne house, Maddie is dealing with her breakup from cheating Jonah by staying in bed and ignoring his calls. She tells Daphne she will no longer be going to Europe and when Twig calls her to apologize and says he deserves whatever she throws at him, she tells him that he is pathetic.

Later, Gideon is telling more stories and when he gets some details wrong Deacon goes to correct him before realizing his father was right and somehow he warped the memory in his mind. Deacon makes a comment about life being more vivid since he quit drinking and his father agrees. However, Daphne cannot stop thinking about her discovery in her grandfather's room and goes to check to find that the bottle is gone. When she is heading to bed that night, she hears the sound of glass smashing in his room and finds him picking up pieces of broken glass as well as holding a bottle of bourbon. He asks her not to tell Deacon as he just needs it to sleep. Daphne walks out without saying a work. Fortunately, she has been distracted by her talent show success as she has made it to the final and is being interviewed on TV with a proud Maddie looking on.

Down at the ranch, things are not looking good as the equestrian therapy is not bringing in much money so Sean suggests throwing a benefit to raise money. This also means that a reluctant Scarlett would have to perform. She catches up with Gunnar over an awkward lunch where they both admit they are trying to figure out what they want to do with their lives. She asks him to perform at the benefit but he admits he is suffering from writers' block but when he sees his hero Steve Earle perform the latter advises him to scare himself by doing something different. Taking his advice, Gunnar goes home and starts rocking out with his guitar. Will is on hand to offer advice about performing it, complete with knee slides et al.

Elsewhere, Alannah and Avery are in a recording studio together when Brad comes in, draoes an arm around her and kisses her head, much to Avery's disgust. That night, she and Brad have dinner together and she is being flirty toward him, also mentioning that she cannot be the one to break up his marriage. He shows her his ringless hand, meaning it is too late. Later, when Avery meets with her, she tells him that she thinks that he and Juliette will figure things out. In spite of his protestations that he only wants to be with her, she tells him that they met at the absolute wrong time and kisses him before walking away after saying her goodbye.

At Jonah's mansion, Mia is still bombarding him with calls which he is ignoring. Twig goes off at him, telling him that he did not deserve Maddie. Jonah tries to trivialize it by saying it is all history but Twig refuses to let it go and they end up physically fighting, with Twig punching Jonah in the face. Then Jonah admits he is an idiot before they go for a beer. Later, Twig goes to see Maddie and tells her that he came clean to Jonah but will not stop working for him. Maddie is disappointed and goes as far to tell him he has nothing with or without Jonah. However, her words seem to work as when he gets ready to leave for Europe he finally tells Jonah that he is done with him. He tells Twig that he is making a big mistake by walking away from the best thing that ever happened to him but Twig does not care and walks off.

Over at Juliette's house, she is panicking as Cadence is still burning up. Avery comes over to help and while they wait to read their daughter's temperature, Juliette reveals that she knows what she wants to do with her life: she has purchased a farm outside of Nashville. They are alarmed to find that Cadence has a temperature of 104 and rush her to the hospital, where the doctor tells them she has a bout of pneumonia but since they caught it in time, she will be fine. Avery and Juliette share a moment, but are interrupted by his phone. It is Alannah but Avery does not answer, in spite of Juliette saying she understands that he has moved on. He has not told her that they broke up earlier that day and the call may be from her to tell him about her coffee meeting with Deacon, where she told him about her problem with Brad.

The benefit at the ranch turns out to be a resounding success. Gunnar performs his song and Sen and Scarlett perform together as his wife watches from the crowd. Elsewhere, Deacon is affectionate towards his father as Twig shows up. He tells her he told Jonah he was tired of him and is insanely happy about his newfound freedom. He picks her up and they happily kiss.

After the show, Sean and Scarlett are in a backstage room and he starts telling her how he feels, but she says that it is easy to fall in love with someone new as they can seem so perfect. She tells him that his wife is the love of his life and to go after her as he will not get another chance. They share a brief kiss and he tells Scarlett that he will never forget her before running off after his wife. Scarlett is left crying but knows she did the right thing.

As everyone is heading home, Deacon suggests that Daphne ride with her grandfather. Daphne hesitates and Gideon makes excuses which is enough for Deacon to realize that his father has been drinking. He grabs his keys and searches the vehicle until he finds a bottle of bourbon. He throws it away and tells his father he knew he was lying to him. He starts to yell but the girls stop him. Deacon tells his father to get out of there, adding that he is not his father. 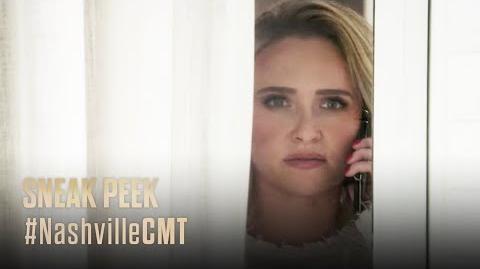