I Don't Wanna Talk About It Now

I Don't Wanna Talk About It Now is the third episode of the second season of Nashville. It was written by Tyler Bensinger and directed by Paul McCrane. It first aired on October 9, 2013.

Jeff Fordham wants Juliette to sing at the upcoming stockholders showcase, but she’s already booked to do a private one-night-only concert for the prestigious Wentworth family in Maryland. The wife, Olivia, is Juliette’s biggest fan and thinks her husband, Charlie, is a prince for setting up this five-year anniversary present. Avery is honored to tune the host’s guitar, as it once belonged to Hank Williams. Charlie needs it to sound great because he wants to sit in with Juliette during the concert. He does just that. Avery is also on stage even though he’s hurt after overhearing Juliette say he’s nothing more than an employee.

Rayna wants out of her Edgehill contract. She’ll even play nice with Jeff if that'll help the cause. Rayna wants to take advantage of the stockholders showcase by parading Scarlett around as her Highway 65 artist. The label will be backing her by giving her a stylist for the affair. Will is also getting a makeover. The two of them are dressed by the best. They each get to bring a guest, so Scarlett invites Zoey and Will ropes in Gunnar as his plus-one.

Rayna owes Edgehill one more record. She needs help from Liam, who is still stinging from having to go to St. Lucia solo. He’s just not interested in hanging with Rayna until she apologizes. That'll work. Jeff is pleased to learn that a new album is coming. He wants Rayna to sing a song at the shareholders showcase. That may be tough. Rayna admits to Liam that she can’t sing due to damage to her vocal cords from the accident. She’s rethinking her exit strategy from Edgehill. She’s also rethinking things with Liam as they kiss and make love.

Deacon wakes up screaming after rolling over on his injured hand, but that doesn't stop him from trying to play the guitar. He hasn't had a drink since the night of the accident. He’s also been attending AA meetings. Coleman shows up at one to announce he’s leaving Nashville. He advises Deacon to deal with the issues of his own father before he can even think about being one to Maddie. Later, Teddy lets Deacon know that his daughter is going to make note of every choice he makes from here on out. Maybe Coleman was right about what he said at the AA meeting.

Layla Grant sings a tune to kick off the shareholders showcase concert. Then Will takes the stage singing a song written by the best songwriter he knows. That would be Gunnar, who seems uneasy during the performance. Zoey is into it though as evidenced by how longingly she stares at Will, but she ends up leaving the show with Gunnar. When it comes time for Rayna to take the stage, she brings up Highway 65’s own Scarlett O’Connor to perform. This ticks off Jeff big time. He believes Rayna’s stunt may have more to do than just payback for Will jumping ship.

Deacon lets his doctor know that he can't manage the pain in his hand, so he asks for help. He then attends a meeting where he tells a story about how his dad once threw a casserole in his mother’s face. The guy then broke her nose and beat his sister with a belt. Deacon’s drunk dad looked over at him and said when you grow up you're gonna be just like me. Deacon admits that he’s a drunk, but swears he never hurt a child. He vows he never will. Coleman lets him know that he’s proud of him.

Rayna and Teddy sign the papers to finalize their divorce. It’s a tough time, but they both want the other to be happy. In other news, Peggy continues act like she’s still pregnant. Her plan to keep Teddy close seems to be working. He initially wanted nothing to do with Peggy or the baby. Now he recalls how they had a good thing at one time. Peggy assures him they can have it again as she leans in to give him a passionate kiss.

Avery confronts Juliette about what he heard earlier. This leads to a big blowout between the two of them. Juliette doesn’t want to hear how she never lets anyone in, so she fires Avery. Guess this proves what she said is true. He really was just the hired help. Later, Juliette runs into Charlie, who makes a move on her. She’s taken aback at first, but then recalls how Avery labeled her as being emotionally unavailable. Charlie is pleased to hear this because he’s as unavailable as it gets. The two of them kiss before backing into a room and closing the door behind them. 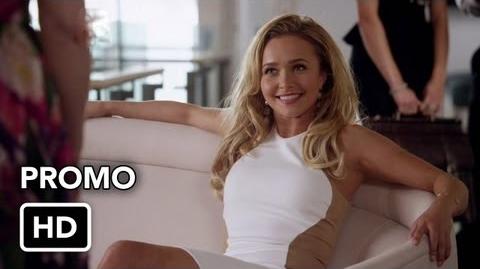