I Can't Keep Away from You

I Can't Keep Away from You is the sixteenth episode of the third season of Nashville. It was written by Taylor Hamra and directed by Mike Listo. It first aired on April 1, 2015.

Deacon and Rayna are discussing his options and she is coming up with a list, but he says that all he needs to do is wait for the donor list. Rayna says she'll wait with him but he doesn't want to put her through anymore pain and he doesn't want her pity. She is refusing to leave and they get into a fight, which results in her breaking his guitar. He gives her another guitar to smash. She asks how he can be the man she always thought he was if he doesn't believe in them and when he doesn't respond, she says he's broken her heart.

Deacon says he has to protect Maddie and not everyone is as strong as Rayna. She says that if something horrible happens she would rather have her daughters see what real love looks like even if it ends. She tells Deacon to fight for his life for the two of them and they kiss before having sex. Afterwards they go to see Maddie and Daphne. Maddie is happy when they tell her they're together but the mood changes when Rayna and Deacon tell them about his cancer.

Avery is on the road with Scarlett and Gunnar and is worried about Juliette since she's due to give birth in three weeks. They're heading to Chicago, where Scarlett had her onstage meltdown. When a Twitter user makes a comment about the incident, Scarlett makes the mistake of replying and all the trolls are unleashed. Avery and Gunnar try to stop her from continuing the debate, encouraging her to write about it in song format. Before they take to the stage, she is nervous and Gunnar tells her he's there for her. They go onstage and perform to the audience. Afterwards, Caleb shows up to see Scarlett and Avery tells Gunnar that if he wants to get back with Scarlett, he needs to make a move fast. Avery then calls Juliette and sings a song to her and their unborn child. Gunnar calls to Scarlett's room but she has gone to see Caleb.

Teddy calls in a man to see if Natasha is under investigation and the man tells him that Teddy can't do anything about it as it's not his jurisdiction. Natasha says that if the FBI brings her in for questioning, she will admit everything and offers to disappear if given money. Teddy goes to Jeff and tells him that if he doesn't help him he'll ruin him. Jeff says he's already ruined and Teddy phones a financial guy, asking if they can set up a "discretionary fund" of half a million dollars but the guy says that will take six months. Teddy wants it to happen faster. The guy gets angry and doesn't want to be bulled, so Teddy hires a private investigator to look into the finance guy's background and find any skeletons.

Will is singing the song he has written with Kevin but is acting awkward around him. Kevin gets the feeling Will doesn't like him and Will tells him he can manage on his own. However, he realizes he can't do it alone and goes to Layla for help. She says that if he hasn't been in love then he shouldn't write about it. Will goes to apologize to Kevin, who says he might understand what he's going through.

In the meantime, Jeff is ordering Layla about and even though he's arranged an interview with a blogger, when they show up Layla gets angry at their joking around. Jeff says that even though he and Layla were sleeping together it was just sex and Layla asks if that's all he's doing with her. However, Jeff later has a change of heart and tells her he may want to try something real. Layla says they should just keep their relationship on a client-manager level.

Luke runs into Sadie and they bond over break-ups. They decide to sing a song together but she can't record it due to her friendship with Rayna. He buys her a coffee and says he's having a hard time getting over Rayna. He offers to walk her to her car but she declines. As she's walking to it, Pete shows up and he's furious since she talked about him on national TV. She pulls out her gun and after a struggle, she shoots Pete dead as Luke pulls up in his truck. 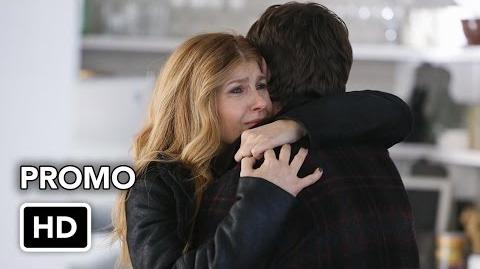