I've Been Down That Road Before

I've Been Down That Road Before is the twelfth episode of the first season of Nashville. It was written by Meredith Lavender & Marcie Ulin and directed by Stephen Cragg. It first aired on February 6, 2013.

Rayna is still trying to wrap her mind around the fact that Deacon is now on the tour. The two of them share an awkwardly silent elevator ride in their hotel. Rayna’s phone conversation with her husband isn't much fun either. Teddy blows her off as she tries to convince him she had no idea Deacon was joining forces with Juliette.

Gunnar has just finished helping Scarlett with some house problem. He admits to having problems with his roommates. They've been messing with him ever since he started playing with another band. Scarlett laughs when he shows her a picture of a turtle that they've drawn on his side. However, she is also having problems on the home front. Avery owes her a bunch of money and she doesn't have enough cash to pay the rent. She tells her landlord that she's getting paid the next day. He gives her just two days to pay up.

Even with all her personal problems, Rayna still wows the crowd in Chicago when she performs “Already Gone.” Tension returns backstage though when she admits how awkward things are to Deacon, who promises to stay out of her way.

Juliette’s Chicago set is also a real crowd-pleaser, but in a different kind of way. She has a bevy of background dancers and lots of glitter as she belts out “I'm a Girl.” Deacon is trying to adjust to all the flash that follows his new boss. Juliette isn't thrilled with the brand she’s putting out there. Glenn advises her to not rock the boat with the fickle fans of music. Deacon gives her the exact opposite advice. He says, “There’s thinking about doing something, then there’s just doin’ it.”

Rayna lets Watty know that she’s finally getting her own label as long as she can bring in a few new acts. She’s thinking Scarlett and Gunnar could be her first signing. They are exactly like she and Deacon used to be back in the day.

Peggy meets Teddy in the street.and informs him that she's moved close by. Teddy gives Peggy a ride home. She lets the mayor-elect know that she's now single, and tells him he shouldn't have to work so hard to make someone love him. This leads to a passionate kiss in the car.

Scarlett and Gunnar perform “One Works Better” at a club where the roommates from hell show up to interrupt things. The hits just keep on coming when Scarlett realizes that her pay for the gig is still going to leave her way short for the rent.

Avery is being filmed for a TV show that features segments on up-and-coming music artists. He decides to swing by his old place with the production crew. Scarlett confronts him about the rent money, but Avery says she broke up with him, and she's the one living there, so in his opinion they're even.

Rayna brings up the subject of Scarlett during another awkward elevator ride with Deacon. He completely ignores her before eventually exiting on his floor. Good talk, Deacon. Good talk.

Gunnar complains about the shenanigans of his room mates. Scarlett asks him to be her new roommate. They'd be rules. "Don't walk around the kitchen naked, and I won't play the banjo in the shower".

Juliette takes Deacon’s earlier advice to heart. She steps out onto the concert stage in jeans and modest white shirt. She brings Deacon up on stage to perform “Consider Me” while a befuddled Rayna, Watty and Glenn watch from backstage.

Teddy and Peggy wake up in bed together. Both have instant regrets about what they just did.

Juliette does great, but a music reviewer recorded it live, and set off an online bash-fest on twitter regarding the brave experiment. An assistant, Emily, tries to tell her she loved it, but Juliette tells her to get out. Juliette sits alone, torturing herself reading tweet after tweet.

Glenn accuses Deacon of filling Juliette’s head with crazy thoughts in an attempt to fill the void he feels regarding Rayna. A short time later, Deacon finds himself in an elevator once again with his former partner. He’s still not talking to her, but that’s only because he’s too busy kissing her until he suddenly exits at his floor. Rayna stays behind in the elevator completely bewildered.

Gunnar and Scarlett move Gunnar's things into a room that Scarlett's mother considered Scarlett's room. A short time later, Avery shows up to give Scarlett the money he owes. He accuses her of sleeping with Gunnar. This leads to a fistfight where Avery gets decked. Avery stumbles out of the apartment

Juliette is crushed until Emily tells her how much she loved her song, and shows her that she’s not the only one: A video of Juliette's performance is a viral hit. Juliette hugs Emily.

After pacing for awhile in her hotel suite, Rayna texts her room number to Deacon. Moments later, there’s a knock on her door. Rayna is stunned to see Teddy on the other side. She asks where the girls are. He lets her know they're with Tandy. Deacon catches sight of Teddy standing in the hallway. He steps away as Teddy steps inside.

Juliette tells Glenn know that she’s growing up, and with growth comes change.

Scarlett tends to Gunnar's lip. He tells her he'd learned to fight from his brother, the one who was in prison. They weren't always model citizens. Does she have a problem with that? She shakes her head; she doesn't.. Avery storms into Marilyn's house and takes his guitar. "There has to be a better way than this," he says, Marilyn is left pondering this development.

Rayna listens as her husband speaks his piece. Teddy has realized that things aren't going to change between them. There isn't going to be a magical moment when she just looks at him and loves him. That’s why he tells his stunned wife that he wants a divorce. 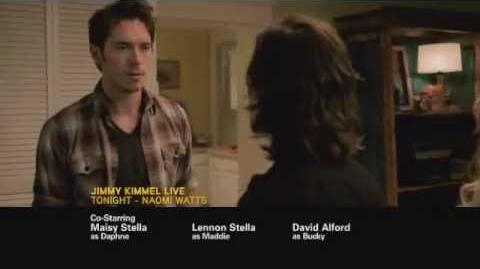 Nashville 1x12 Promo "I've Been Down That Road Before"