I'm Sorry for You My Friend

I'm Sorry for You My Friend is the tenth episode of the first season of Nashville. It was written by Dana Greenblatt and directed by Sanaa Hamri. It first aired on January 16, 2013.

The episode begins in San Diego where Rayna and Juliette (who have started their grand tour) are in a press conference trying to answer as many questions as possible. Juliette very cleverly evades the question of her not walking down the aisle. Carmen is about to leave and Deacon kisses her goodbye. She asks him to be kind to himself. Cy is slightly jealous that Deacon could manage to hook up with Carmen. The rest of the crew makes fun of Cy. Rayna is having issues with her guitarist and Bucky says that he will talk to him. Rayna's girls call her (via phone) and she shows them (via phone) the place she is going to perform next. Teddy talks to Rayna and feels that she will not come home for the elections.   He is upset and hangs up. Scarlett tells Gunnar that she has tickets for Deacon’s show. Gunnar is acting weird and Scarlett notices that. But he agrees to go. Glenn tells Juliette that Sean still hasn't signed the divorce papers. He tells her to talk to him. But she knows that she is the last person he wants to hear from. Rayna talks to the guitarist and he has no clue what she expects from him. He quits. Rayna asks Glenn to find her a good guitar player and Glenn wonders if anyone would be good according to her. Scarlett and Gunnar arrive in Texas and Gunnar has to go meet his brother; family obligations. Deacon did not know Gunnar was from Texas. Well, neither did she know. Teddy, Lamar and Tandy see that Coleman is out on the streets asking for votes.

This means he has run out of funds. Lamar suggests a way that they could spike up the votes; but Teddy wants to earn the votes for himself, and doesn't want to cheat. He has sacrificed a lot for this and doesn't want to lose whatever little is remaining. Liam arrives to meet Rayna. She wants him to play for her. He agrees but for just three shows. Agreed! Juliette gives an interview where she says that her idea of marriage was a mistake. Glenn is surprised as to why she would say something like that. She said that this is the best way she could convey her message to Sean and by seeing this, he will definitely sign the divorce papers. Gunnar goes to the prison to pick up his brother Jason who has just been released.

Juliette is signing autographs for her fans and at the very same time she gets served. She is summoned to appear before the family court the next day. Liam arrives in Rayna’s dressing room and she presents him a pair of boots; a little thank you for coming through for her. Deacon introduces Scarlett to Cy and Cy starts flirting with her. Juliette is still practicing her songs and Rayna is pissed. It is her turn to use the stage for practice. All know that Juliette wouldn’t listen. So Liam decides to make Juliette get off the stage. And he is successful! Rayna wonders if he could stay for the whole tour!! Juliette calls for her jet. Jason and Gunnar check in to a motel. They sing a song together. Liam arrives to meet Rayna in her dressing room and Rayna asked him why he did not wear the boots. He tells her that he doesn't wear cowboy boots.

He says that wearing those boots won’t turn him into Deacon. He points out that she is scared to get up on that stage without Deacon. She tries to deny; but he insists. Marilyn tells Avery that the deal Dominic is offering is a bad one. Avery confronts Dominic and Dominic tells him that he is trying to make Avery into a big star and Marilyn is trying to eat money off Avery. Avery believes Dominic. They then go for a drive in Dominic’s cool ride. Scarlett loves Deacon’s performance. Cy asks Deacon to sign the guitar for a boy on a wheelchair. Cy then takes Scarlett to a pub nearby without telling Deacon. Juliette arrives to CA to meet Sean. He is not readily going to give her what she wants. Moreover she hasn't even apologized for embarrassing her parents and breaking his sister’s heart.   Inside the pub, Cy signals the security to asks the guests to leave. He then tries to get physical with Scarlett. Deacon, who is busy signing autographs, realizes that his niece is missing. He tries to get inside the pub but the security stops him. He pushes his way in and beats up Cy. Deacon quits the band. Jason is carrying a gun and Gunnar is aghast on seeing that. It is a violation of the parole. Jason has sold Gunnar’s guitar. He is about to flee. Gunnar stops him. Jason accuses him of leaving him in the parking lot. Gunnar tells him that he was 16 then and moreover he was not the one who robbed the store. Jason hugs his kid brother and leaves. Rayna does the opening of the show and introduces Liam to the crowd. Coleman’s wife is deciding on her outfit for the big day.

Teddy is upset as he feels that Rayna would not be home with him for the big day. Rayna tells Buck that she wants to go home to be with Teddy. Avery tells Marilyn that he signed the contract. Dominic gave him a car as bonus. Marilyn tells Avery that this was Dominic’s trick. But Avery chooses not to believe her. He tells her that she could either work with him or go her way. Gunnar comes to pick up Scarlett. He tells her the truth about his brother serving time in prison. Sean and Juliette are in front of the Judge and Juliette accepts that she did commit fraud by giving a false representation of marriage to Sean. She also withdraws her petition for divorce. Juliette apologizes to Sean for what she did. She tells him that she was never going to be the wife he deserved. She knows that he knows it; but she wants him to know that she knows it too.

It is time for the election results. Teddy and the girls are surprised to see Rayna as she has arrived to support her husband. It is indeed a big surprise for Teddy. We see that Teddy wins the elections and he is now Mayor. Coleman gives a speech where he says that he will continue to fight for the hardworking people of the city and against the greedy ones. He then gives credit to his wife without whom none of this could have been possible. This is slightly awkward for Rayna and Teddy. Lamar and Tandy, watching from above, are glad that Rayna made it. Tandy quietly accuses Lamar of buying the elections for Teddy despite Teddy telling him not to. "I'll never speak to you again", she kids him. Our attention is directed down to Teddy and Rayna, as if Tandy were pointedly looking at one of them. Lamar tells her that he did not do anything. Right! Peggy arrives to meet Teddy. She tells him that the pills were a mistake. She never intended to hurt herself. He tells her that he did not know if it was a good idea to call and so he did not. She tells him that she came over to congratulate him. She is sure that he will make a good mayor. She is about to kiss him but decides against it and leaves. 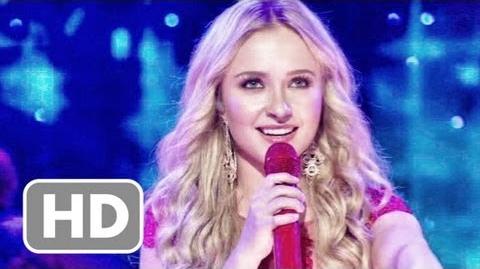