I'll Keep Climbing is the eleventh episode of the second season of Nashville. It was written by Tyler Bensinger and directed by Callie Khouri.  It first aired on January 15, 2014.

It is revealed that Peggy has died after being shot by a disgruntled unemployed man and Rayna and the girls watch on TV as Teddy gives an emotional press conference.  Maddie and Daphne later try to comfort him by telling him that Peggy was nice.  Meanwhile, Will is camping in the mountains, disgusted at being gay.  Brent and Layla have been worried about him and Gunnar sets out to find him.  When he does, Will admits he wanted to kill himself but changed his mind when he saw the train coming towards him.  Gunnar yells at him that he's never to do something like that again and tells him that he's Will's friend.  Will decides to go back on tour and then has a talk with Layla while avoiding Brent.

Meanwhile, Gunnar and Scarlett meet with Kelly Clarkson to discuss the possibility of writing a song for her, but when they perform it, Scarlett gets cold feet and bolts from the room.  When he gets home, Zoey tells him she loves him and he tells her he loves her too.  Elsewhere, Scarlett and Avery split temporarily but amicably and she accuses him of having feelings for Juliette, which he denies.  However, she says she saw how he looked at Juliette his face flickers in recognition of the truth and Scarlett admits they're not the same people they once were and they decide to call time on their relationship.

Elsewhere, after ending rehersals Juliette makes the mistake of engaging with her haters when she leaves the building.  When a protestor makes a derogatory comment aimed at her mother, she retailiates by saying that there's no God who would listen to a crackpot like him.  Unfortunately, for Juliette the footage ends up online but has been edited to make it look like she has declared that there is no God.  She enlists Layla's help to back her up at a press conference since Layla was also there when the incident occured.  Layla goes public with the truth and then tells Juliette that she owes her one.

Pressed by his manager to come up with new material, Deacon has a tough time coming up with ideas until Megan arrives.  However, he soons gets so frustrated that he ends up shouting at her, so she leaves.  He later ends up parked outside a liqor store.  Fortunately, he doesn't go in but realizes that all of his past writing success has come from a place of pain and unrest, which were influenced by his drinking.  He decides to give his relationship with Megan another try and she forgives him.  Elsewhere, Rayna is under pressure to deliver a single and Liam urges her to ignore the market research and focus on being and artist.  She decides to write a new song.

When Rayna and Maddie come over to Deacon's house, Maddie tells them she and Deacon have written a song together and even Daphne joins in to sing it with them as Rayna looks on. 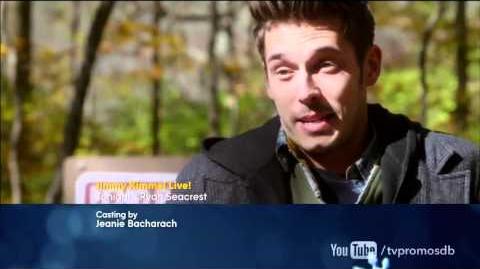