I'll Fly Away is the tenth episode of the fifth season of Nashville. It was written by Liberty Godshall and directed by Dan Lerner. It aired on March 2, 2017.

As Rayna is laid to rest, Deacon reads a eulogy that describes her as his whole world. Teddy, who has been given a three-day leave from prison, is also there along with Tandy. Everyone returns to Rayna's house for the wake but Deacon wants to be alone to grieve and hides away in his and Rayna's bedroom. Maddie and Daphne are sticking together while Clay feels out of place. He soon goes outside for some fresh air and Maddie joins him.

Meanwhile, Scarlett is also trying to put on a brave face but ends up breaking down, with Gunnar being the only one to comfort her. Glenn tells Juliette that CMT wants Faith Hill to perform the tribute to Rayna at the upcoming awards ceremony but Juliette refuses to hear that, saying she should be the one to do the tribute since she and Rayna were close. Glenn contacts CMT and they agree to allow Juliette to perform the tribute. Elsewhere, Zach turns on a video that he had made for Rayna but turns it off when Bucky starts to tear up, apologizing for coming across as insensitive. Although he attempts to make a speech,Rayna's friends toast her memory. Later, as Will is leaving Zach has a word with him, even possibly flirting with him.

Later, Teddy is reminiscing about the good years he had with Rayna. Tandy wants him to help her gain custody of Maddie and Daphne and to take care of Highway 65. Upstairs, Maddie goes to see Deacon and when he says he does not know who he is without Rayna, Maddie replies that he is her father. She puts him to bed and stays with him for a while. Elsewhere, Scarlett snuggles up with Daphne and Bucky cries on the couch while Teddy enjoys being able to sleep on another couch.

The following day, Teddy, Tandy, Scarlett and Deacon gather at the lawyer's office and are surprised when they learn that Rayna never appointed guardianship for the girls or the estate, which includes Highway 65. Teddy steps up by saying that he should be the one to take care of the girls and the label, while Deacon remains silent. The lawyer says that Teddy's claim can be contested in the courts and that the girls can choose who they want to live with. When he chats more to Tandy, Maddie overhearss their conversation and goes to tell Deacon. He confronts Teddy and Tandy, telling them that Rayna ran all her decisions with the label by him so he has a say in what goes on. Teddy says they'll just have to wait and see what the judge says.

Maddie tries to contact Clay but he will not pick up so she goes to Daphne to fill her in on what is happening. Daphne does not want to choose which father she wants to live with and tells Maddie that she has been dreaming of Rayna singing to her. Maddie says she will not let them be split up but Daphne says they might not have a choice. Downstairs, Tandy wants to talk about raising the girls and taking care of the label. She thinks the judge will agree with her wishes and asks if he wants to put the girls through all that. When Teddy tries to talk to Maddie, Deacon walks in and accuses him of manipulating her but Teddy reminds him that he was there for 17 years of Maddie's life and he has never been declared a threat to her life in a court of law. Rather than retaliating by hitting him, Deacon walks away and Maddie goes with him.

The following day, Clay apologizes to Maddie for his behavior at the wake since it brought back memories of his own mother. She forgives him and asks him to stay with her as what she is going through really hurts. Elsewhere, Will and Zach are having a conversation while visiting an art gallery and when the latter suggests taking him to Europe to visit more museums, Will tells him that he is something else. Zach feels Will is judging him on the surface but Zach just wants people to like him and he kisses him.

Daphne is continuing to take Rayna's death hard and Scarlett comforts her, saying that everyone has lights inside of them and the brightest parts of Rayna and Deacon's lives was Maddie and Daphne. Deacon overhears the conversation, including when Daphne says she does not want to choose who she lives with as whoever she does the other will end up hating her.

As Juliette rehearses for the CMT tribute she starts to feel strange and when she watches her performance back she does not feel right about singing Rayna's song. That night at the awards, Deacon tells Teddy that the girls are going through hell and do not need to see them fighting, so he will give Teddy custody of them without a fuss. As Will performs a tribute to Rayna, an assistant approaches Maddie as Juliette wants a word. Juliette tells Maddie that she should be the one to perform the tribute to her mother.

Juliette takes to the stage and gives a speech about the first time she heard Rayna on the radio and how much it touched her. She then introduces Maddie who starts her song before breaking down. Deacon and Daphne rush onto the stage to help her complete the song and afterwards Teddy approaches Deacon and tells him that since he still has three months left to serve he will give him guardianship of the girls. 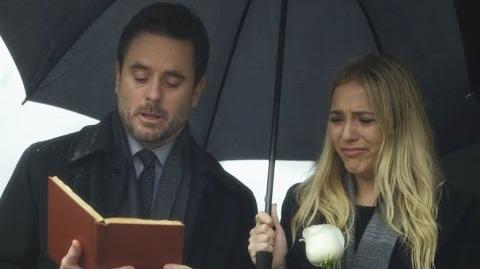