Hurricane is the seventh episode of the fifth season of Nashville. It was written by Liberty Godshall and directed by Dan Lerner. It first aired on February 9, 2017.

While Deacon attempts to write a song about his first kiss with Rayna, they playfully bicker about where the kiss actually took place. Soon, a cameraman named Gene, who is hired by Zach Welles to shoot Rayna and Deacon's songwriting process, arrives. They eventually tire of him intruding into their privacy and during a phone conversation with Zach he tells her that it is what her fans want to see since everything is on YouTube now.

Meanwhile, Damien and The Exes' appear on a talk show to discuss their new music video and when Damien later suggests that they all go out to dinner together, Gunnar backs out but Scarlett eventually goes alone and enjoys her time with Damien. The following day, Gunnar's behavior continues to irritate Scarlett, especially when he's blanked by fans wanting her autograph, and she tells him to get a grip on himself.

As Rayna and Deacon continue to struggle with songwriting ideas, Gene refuses to leave them alone and they eventually manage to escape the house, only for him to follow them in his car. They end up at a bowling alley but their fun does not last long as they are contacted by fire services who were called to put out a fire at their house, caused by Maddie who left a cake baking in the oven after inviting Clay over and spending time with him in her bedroom. When they get home, Rayna is not pleased with her eldest daughter while Clay lets it slip to Deacon as he is leaving that he was at one of his gigs eight years ago, making it possible that he is not 24 years old like Maddie said.

The next day, Scarlett meets Rayna at the Highway 65 offices and bumps into Damien as she is leaving. He tells her he is leaving town and she thanks him for everything he has done for the duo.  She and Gunnar eventually make their peace and sleep together. While this is happening she several text messages from Damien - he has not left town like he said as he needs to see her.

The episode ends with Rayna and Deacon finally writing their song and recording it together in her studio. 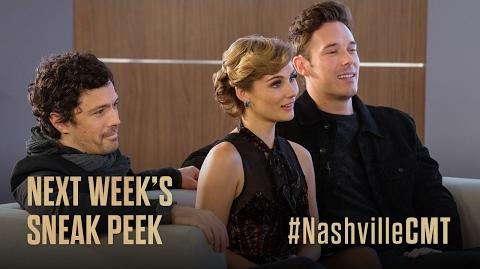