How Does It Feel to Be Free

How Does It Feel to Be Free is the twelfth episode of the fourth season of Nashville. It was written by Ben St. John & Mollie Bickley St John and directed by Steve Robin. It first aired on March 23, 2016.

Avery attempts to see Juliette at the treatment center but her therapist says it's not a good idea as Juliette is in a fragile state and doesn't want to engage with him. He gets angry and the woman tells him the last thing Juliette needs is this kind of drama.

He heads to the studio to work on producing Layla's album. Since Luke is told that Juliette could be an opening act on his tour, he pays Avery a visit at the studio to ask about Juliette and Avery finally reaches his breaking point. He soon confesses to Layla that Juliette is undergoing treatment for postpartum depression and she tells him about her marriage to Will. She comforts him and tells him he needs to feel free.

He returns to the hospital demanding to see Juliette again and says that if she doesn't go public with their divorce, he will. The following day, he watches a news report in which Juliette has agreed to divorce him and that the media should respect their privacy. He removes his wedding band and the next time he hits the studio he is in a better mood.

A woman named Vita walks into The Beverly and asks Deacon if she can audition for the open mic night. He reluctantly allows her to audition and is so impressed with what he hears that he invites Rayna and Bucky to the open mic night to hear her. After she performs, Rayna offers her a record deal but then she starts acting oddly. When filling out an application form for the bar, she bolts when she sees the felony question. Rayna tracks her down and discovers that she lives in her car. Vita confesses that she has been arrested before but Rayna convinces her to return to the bar. Even though Frankie takes some convincing, she gets the job waitressing.

On the way to meet Gunnar, Scarlett sees Erin kissing another guy in the guy's truck. Initially reluctant to say anything, she eventually tells Gunnar, who confronts Erin about it. Erin says that since they weren't monogamous, she didn't think there was a problem but she's willing to be as she likes him so much. Gunnar doesn't care that she was with some other guy as he's not really into their relationship, so she kisses him goodbye. Scarlett later tells him that she has a date with the taxidermist and not to judge her.

Meanwhile, Will is happy to sit in on Gunnar and Scarlett's next gig, but his performance is cut short by a homophobic man shouting slurs at him before throwing a bottle at him, which breaks his nose. The man is arrested and charged with a hate crime. Will is asked to give a statement but when he's at the station, he decides not to go through with it. He makes the choice to return to the bar to finish his set and the same man heckles him again but the crowd is on Will's side. When Scarlett and Gunnar approach him, the guy and his friends decide to leave quietly.

While conducting a radio interview, Luke is bombarded with hateful comments by several listeners. As he's leaving the station, he bumps into his old friend, Riff, who retired in order to spend time with his wife and children. Luke goes to their house for dinner and he comes up with the perfect solution to his tour woes: Riff should be his opening act. After discussing it with his wife and children, Riff accepts but says he'll only do it if they can come along too and Luke accepts.

Vita's shift at The Beverly goes well and she leaves to go home. Frankie, who has been counting money, later phones Deacon to tell him that $500 has gone missing from the till. They realize that Vita must be helping herself to it. 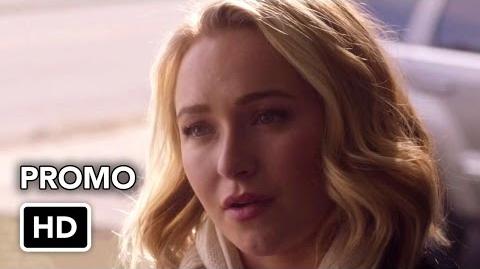