How Can I Help You Say Goodbye

How Can I Help You Say Goodbye is the third episode of the fourth season of Nashville. It was written by Debra Fordham and directed by Stephen Cragg. It first aired on October 7, 2015.

After Beverly's aneurysm, Scarlett is agonizing over whether or not to remove her mother's life support. Despite doctors' near guarantee that her mother will never recover, Deacon lobbies to keep his sister alive at all costs. Scarlett heads to the hospital chapel to sing and is joined by Gunnar, who assures her that whatever she does will be the right choice.

Avery is having a hard time coping with Juliette's absence and consults a divorce lawyer who draws up some papers but he later stops short before signing them. Meanwhile, Juliette's erratic behavior continues and while there's a break in her tour schedule, she goes speedracing at an Indy 500 track in Indianapolis with Luke before they head to a bar for several drinks. He tries to get her to ease off to no avail as Juliette Tweets their location and soon the bar is packed and the duo takes to the stage to sing. The following morning, she awakens with a major hangover and Luke tells her they had to sneak her out in the band's equipment road case. When he says that he regrets putting his career ahead of his family, she storms off.

Teddy is in jail and is crushed when his daughters come to visit and Maddie won't speak to him. Daphne, who was recently suspended over retaliating to a classmate's taunting, gets upset when he admits his guilt and tells him she hates him, throwing the necklace he gave her on the ground. Later, Rayna returns to the jail with her daughters and tells him that he was a great husband once and that they will stand by him. Maddie and Daphne hug him.

Will visits Kevin, who's writing songs with some friends. When one of the friends dares him to use his status as a star to be a spokesman for the gay community, Kevin tells her to leave. Will tells Kevin he's not ready to be a poster child for the gay community and Kevin agrees.

A tormented Deacon is refusing to support Scarlett's decision and Rayna encourages him to go say goodbye to his sister. He returns home and breaks down crying in Beverly's bedroom. At the hospital, a despondent Scarlett holds her mother's hand as she's removed from life support and dies. 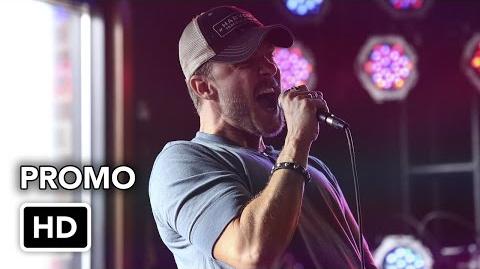 Nashville 4x03 Promo "How Can I Help You Say Goodbye" (HD)