Hanky Panky Woman is the eighth episode of the second season of Nashville. It was written by David Gould and directed by Eric Stoltz.  It first aired on November 20, 2013.

Charlie's wife, Olivia, shows up to Juliette's hotel room and says she knows about her affair with Charlie.  Thinking she's angry, Juliette tries to explain herself but is taken aback when Olivia kisses her and says she wants in on the action.  Juliette throws her out and says she doesn't like to share, but Olivia reminds her she's the one doing the sharing since Charlie is her husband.  Elsewhere, Scarlett is surprised to see Gunnar get on her tour bus and he says he's there as he's writing songs for Luke.  She says it's a big deal and he tells her her gig is a much bigger deal.

Teddy shows Peggy a newspaper that says the people of Nashville approve of her as first lady.  He wants to come to her check-up but she doesn't think it's a good idea. He says he wants to be there for the both of them and their child.  Meanwhile, Rayna and Tandy are chatting as Rayna is packing to meet Scarlett and Luke on tour.  Tandy asks her to compare Luke and Liam and notes that she has only packed lingerie.  Juliette tells Glenn that he needs to cancel her meeting with the Wentworths as she's going home to work on new songs.

Deacon turns up to see Scarlett on tour and she's happy to see him but is called away to rehearsals.  However, Deacon is promised a seat for the tour.  Rayna is about to leave her house when the authorities show up with court papers demanding that she surrender her master tapes to Edgehill and if she doesn't comply she will be arrested.  She hands them over and Bucky tells her they'll seek an injunction.  She's more determined to get to Tampa to have it out with Jeff.  While Avery and Juliette work on songs together, she is being bombared with missed calls and texts from Charlie, who says he wants to explain himself.  Avery asks her what's wrong and that she can tell him since  they're friends.  She tells him about her whole deal with Charlie and he tells her what he went through with Marilyn Rhodes.  Avery tells her that she's no throwaway and that the Wentworths were wrong to treat her the way they did.

Back on tour, Jeff is treating Scarlett badly.  When she takes to the stage, she's having sound problems with her earpiece and the audience aren't pleased as they start booing at her and throwing their beer cups.  She runs off stage but Rayna walks her back on and rebukes the crowd for what they've done.  Scarlett gets through her song but afterwards tells Deacon about how she let Rayna down.  Rayna gets into a fight with Jeff who wants her to release her record immediately.  Deacon approaches Rayna and tells her Scarlett shouldn't be on the tour.  Rayna says that if Scarlett truly wants it, she'll toughen up.  While having a meal with Avery at a restaurant, Juliette sees the Wentworths and approaches their table, telling them they're perverts and she wants nothing to do with them.

After the concert, Scarlett runs into Gunnar and they write a song together.  While Luke and Rayna are together in bed, they overhear them singing and go out onto the balcony to see what's going on.  Luke is impressed but he doesn't want Gunnar to sing the song with him.  Elsewhere, Peggy is suffering from "bad cramps" and phones Teddy to come home.  She then opens a tub of pork blood and when he arrives home she tells him that she lost the baby.  Luke and Deacon have a bonding moment when Luke makes a comment about Deacon's hand.  Rayna joins Luke onstage to perform the song that Gunnar wrote and afterwards she tells Jeff she wants to release it as a single and that he has to release her masters.

Scarlett phones someone to tell them she's not cut out to be a singer but that she might have to be.  Teddy is supporting Peggy and she says he just married her since she was pregnant, but he says that isn't true.  Elsewhere, Charlie shows up at Juliette's again and admits that he's falling in love with her. 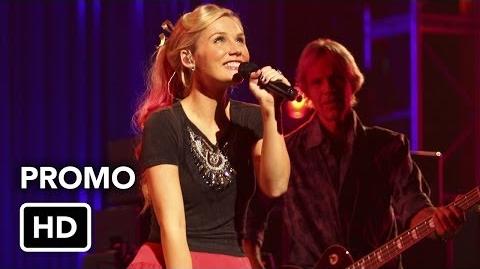