Start a Wiki
Ghost in This House is the seventeenth episode of the fifth season of Nashville. It was written by Richard Kramer and directed by Maggie Greenwald. It aired on July 6, 2017.

As Deacon, Maddie and Daphne arrive at a restaurant for breakfast they bump into a female neighbor who offers her condolences for Rayna's death and clearly flirts with Deacon as Maddie and Daphne look on. When she leaves he tells the girls that they are the only ones for him as they head off to order food. Scarlett stops by the Highway 65 offices to meet with Alyssa, who offers her advice on fixing her recent problems by getting involved in a charitable cause. The Exes decide to stage an impromptu gig for their fans and afterwards while signing autographs, Scarlett notices a lone fan, whose name is Nadine. She approaches her but Nadine asks her why she cheated on Gunnar as they were perfect together and calls her a liar.

At the Highway 65 offices, Deacon is about to leave but is called aside by Zach who wants to introduce him to Jessie Caine. They already know each other but Zach talks to him further and tells him that she is the former wife of label boss Brad Maitland. Jessie and Deacon meet up for a few drinks and spend hours reminiscing about their past relationships. After Maddie and Deacon tease him about the neighbor from the restaurant named Diane leaving over some food, he receives a call from Jessie inviting him to see her perform at the Mercy Lounge but when he contacts her to say that he would like to welcome her to Highway 65 but jessie gets angry when she thinks he is only in to him since they are both single and hangs up.

Scarlett decides to confront journalist Mackenzie Rhodes over the article and heads to her workplace, calling her a manipulative liar but Mackenzie says it is just what she does. Scarlett finds Nadine's Facebook page and notices her artwork and various comments in which she puts herself down and decides to contact her to meet up for a coffee. However, the meeting does not go well as it is clear that Nadine has self-esteem issues and just as Scarlett comments on her artwork, Nadine gets a call from home and says she has to go as her mother cannot be left alone. The following day, when Mackenzie writes more hurtful things about Scarlett, the latter decides to take action after Gunnar tells her the same happens to boys.

Meanwhile, Will is busy in New York meeting with Budweiser executives who want him for a commercial. They take him to Jakob Fine for a style makeover and when he asks the executives to leave, he asks Will what he is doing that evening but Will tells him that he is in a relationship. Jakob knows Zach Welles and warns Will to be wary of him. Will meets up with Zach later as the latter is hosting a party and tells him what Jakob said, only for Zach to say that Will is the one for him. However, when Zach receives a call on his cellphone from another man during the night, Will realizes he has two different cellphones and the following morning he questions Zach as he attempts to head back to Nashville. Zach tells him that a guy he was in a relationship with still has not got over their breakup but he will explain more later. They return to Nashville and gather everyone at the Highway 65 offices to watch Will's commercial, which turns out to be a hit with everyone. Afterwards, Zach calls Will aside and to prove how much their relationship means to him, he phones up his ex-boyfriend, who is threatening to kill himself, and attempts to calm him down before telling him he has to move on. When he hangs up, Will tells him he feels Zach will end up doing the same to him.

Scarlett and Gunnar host a meeting with a group of their fans and it soon turns into a therapy session with everyone spilling out their thoughts on how they have all gone through hard times. Mackenzie shows up and reveals that when she was a schoolgirl the other students would make fun of her due to her disability which required her to wear a brace. Elsewhere, Avery finally plucks up the courage to tell Juliette that he got an offer to go out on tour and will be leaving her and Cadence on their own for seven weeks. Juliette does not believe that she can manage without him for that length of time and walks off. Deacon decides to go to see Jessie perform at the Mercy Lounge but when her song starts to hit him emotionally, he gets teary-eyed and leaves. 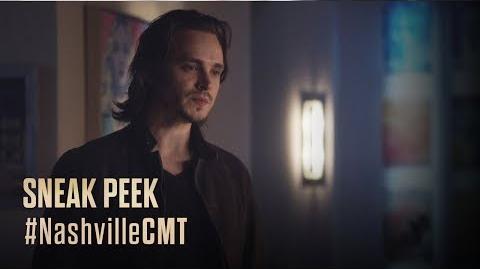 Retrieved from "https://nashville.fandom.com/wiki/Ghost_in_This_House?oldid=23328"
Community content is available under CC-BY-SA unless otherwise noted.